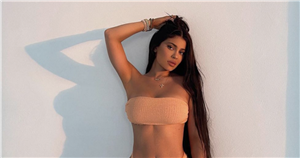 Parents of young girls desperate for a "slim thick" body say teenagers are risking their lives for the 'Instagrammable' figure.

Apetamin, which is manufactured and sold by the Indian pharmaceutical company TIL Healthcare, is a syrup containing cyproheptadine – a hepatotoxin to stimulate appetite – lysine and some vitamins.

The UK's Medicines and Healthcare products Regulatory Agency (MHRA) announced this week it is now investigating the sale of the product, after a BBC documentary into the fad – Dangerous Curves: Get Thicc, Get Sick? – highlighted serious concerns.

Since the documentary aired, parents have spoken out about their experience with the drug.

One mother, who asked not to be named to protect her child's privacy, told OK!: "I discovered my 14-year-old daughter had bought the drug online when she began acting strangely.

"She was sleepy and miserable, which is sometimes typical of normal teenage behaviour, but her mood seemed to change overnight.

"She was getting in from school and going straight to bed. Eventually she confessed and told me she'd read about this syrup on Instagram. I was horrified. She is a naturally skinny teenage girl but her body is still changing.

"It's so frightening to think these unapproved drugs are readily available, especially to children." Social media and online retail companies like Amazon, Instagram and Depop have since begun removing the unlicensed product – although many listings still remain on Instagram. There are over 1million posts under the hashtag "slimthick".

One woman who features in the documentary is model Altou Mvuama, 19, from London. She is one of thousands of women worldwide who have taken Apetamin, often falsely promoted by social media influencers as a quick fix for enhancing curves and achieving an hourglass physique.

The drug has not been approved by the US Food and Drug Administration or the UK Medicines and Healthcare products Regulatory Agency and has reported side effects including liver failure, extreme drowsiness and excessive swelling.

Despite this, Altou found Apetamin for sale on a string of sites including Amazon, Instagram and Depop, with bottles available for as little as £10.

Altou, who previously shared a video promoting Apetamin to her 14,600 YouTube subscribers, told how the product made her so drowsy she fell asleep at her school desk.

One woman told us her daughter's feet swelled up after taking the suppressant. Another said her daughter collapsed in her bedroom, hitting her head on her bedside table.

Dr Victoria Garland, a resident physician at the George Washington University in Washington DC, says she has witnessed liver failure as a result of Apetamin.

"She [my patient] was jaundice, her own body was fighting her liver," she said in the documentary.

"It's hard to know what could have happened, she could have full liver failure had she continued it.

"What particularly worries me about Apetamin is the way that it's marketed as a vitamin supplement, which implies that it's safe, it's natural.

"The natural ingredient that stimulates appetite is cyproheptadine, and then there are a few other ingredients like e-vitamins, which is where it gets its name. There are no actual studies, we don't know how Apetamin will impact a person."

The MHRA is now investigating the sale of the product.

A representative for Medicines and Healthcare Products Regulatory Agency said: "Apetamin is an unauthorised medicine which should not be sold, supplied or advertised without a license. Taking unauthorised medicines can have serious health consequences. The sale of this product is now under investigation."

An Instagram spokesperson said: "Buying and selling non-medical or prescription drugs is strictly against our policies and we have removed the accounts brought to our attention."

An Amazon spokesperson told the BBC: "This product has been removed and we've taken action against the sellers in question. Buying and selling non-medical or prescription drugs is strictly against our policies."

And a spokesperson for Depop commented: "Medical products, including unlicensed products such as Apetamin, are not permitted on Depop and will be removed."