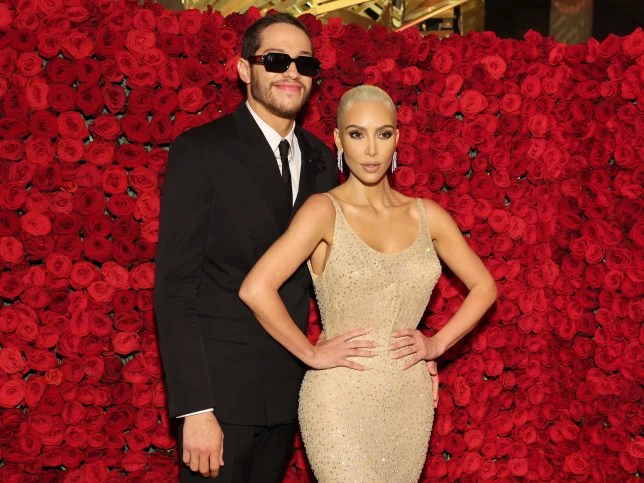 Martha Stewart has claimed Pete Davidson is having ‘the time of his life’ after his split from Kim Kardashian.

The Saturday Night Live star, 28, and reality icon, 41, raised more than a few eyebrows when they began dating late last year after Kim hosted the show, but as the months went on they appeared to be happy in their relationship.

Pete met Kim’s children and her family, appeared on their reality show, and didn’t seem to let her ex husband Kanye West’s furious public rants – and vague threats – bother him.

However, things sadly came to an end after the Skims founder parted ways with Pete ten months after dating (and after he tattooed her and her children’s initials on his body).

Now. he’s reportedly in a better place, according to Martha Stewart, 78, who called him the son she ‘never had’.

During a recent interview, the lifestyle guru said Pete is ‘doing two movies’ and has ‘agreed to do [her] podcast, supposedly.’

She continued to E! News: ‘He’s having the time of his life.

‘This guy is a talented actor, a comedian, and who is a bon vivant at the same time. He’s fun.’

Martha’s comments come after one of Pete’s friends claimed that the former couple did not break-up mutually, and it was actually Pete who called things off.

Talk show host Johnny Potenza, who is from Pete’s hometown of Staten Island and who gave him his first TV role back in 2010, suggested to The Sun: ‘I think Kim had too much baggage for him.’

He argued: ‘She’s 20 years older, she has four kids and she was married to Kanye West who was always making trouble for them.

‘Kanye was picking fights and calling him names. For a man his age it was childish – a pathetic love drama.’

Fully gossiping, Johnny went on to say that ‘most’ people he spoke to in Pete’s hometown were openly saying his and Kim’s relationship ‘wouldn’t last,’ adding that ‘everyone was shocked’ when they began dating.

While Pete has been fairly tight lipped about his relationship with Kim and their break-up, the mum-of-four recently gushed about her former partner in a new interview, where she labeled him a ‘cutie.’

‘He’s literally such a good person, they don’t really make them like him anymore,’ she told Interview Magazine.

She added: ‘I’m excited for what he has coming up.’

Metro.co.uk has reached out to reps for Pete for comment.