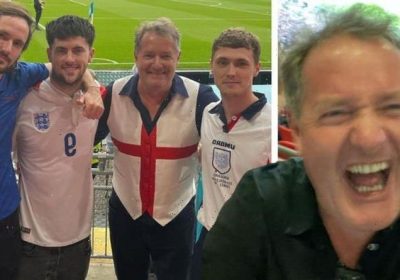 Euro 2020 is all over as Italy took home the trophy after a lengthy and very trying game against England at Wembley, and everyone was subject to a rollercoaster of emotions throughout the final and the semi-final against Denmark. Piers Morgan, 57, had been in attendance for his home nation’s games throughout the tournament, and revealed he managed to get his two sons, Spencer, 27, and Bertie, 20, tickets, but at a “vast expense”.

Two of my sons were embedded, at vast expense to their father (who was in a hospitality box), deep among the hardcore fans at Wembley

The pair joined their dad for the semi-finals and last night’s nail-biting battle, but were in the heart of the crowd rather than the hospitality box Piers was in.

Ahead of the epic match, the presenter took a look back at the team’s performance during the semis, where he discussed the controversy surrounding England’s penalty win and disclosed that he managed to get his boys a ticket each at a hefty cost.

Writing in his Daily Mail column, Piers penned: “Two of my sons were embedded, at vast expense to their father (who was in a hospitality box), deep among the hardcore fans at Wembley, having the time of their lives.

“‘I got crowd-surfed two rows when Kane scored!’ messaged Bertie.

The former Good Morning Britain star went on to reveal that Spencer ran into his old co-host Susanna Reid.

“‘Bumped into an old friend of yours,’ texted Spencer, enclosing a photo of him hugging an ecstatic Susanna Reid.

“‘Best match I’ve ever been to,’ she told me later.

Despite the expensive price-tag which saw tickets go for up to £20,000 each as fans battled to see the Three Lions take on Italy, Piers didn’t regret a penny of it and his boys were ever-grateful.

He continued to write: “Tonight, as we drove home through streets lined with jubilant fans going absolutely nuts, Bertie croaked, ‘Thanks Dad, that was the greatest night of my life!’

“‘After Sunday, son, it will be the second best,’ I replied with all the paternal firmness that Gareth Southgate shows to his players.”

Ending his column on a high note of the familiar and resounding phrase “football’s coming home”, it sadly wasn’t meant to be.

A devastating loss for England and with both players and fans in tears, Piers took to Instagram to applaud the boys who carried us all the way to the final.

“I admire every player who steps up & shows the balls to take a penalty in a game that important,” he penned.

“Proud of you @bukayosaka87 @sanchooo10 @marcusrashford – you missed, and we lost, but you’ve all got guts.”

He had previously shared a snap of himself, Spencer, Bertie and third son Stanley alongside comedian Jack Whitehall.

“Extra time. It’s agony… and not just because Jack Whitehall’s joined us,” he captioned the post.

“Come on England.. one last push…”

Until next time boys…