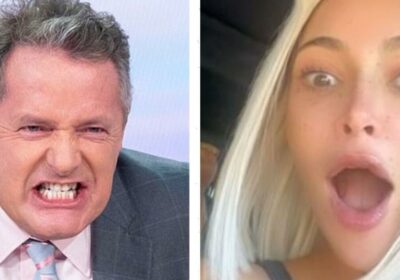 Piers Morgan, 57, went on the offensive against reality star Kim Kardashian, saying he felt “genuine disgust” when he saw her latest photoshoot, in which she bared the derriere that had catapulted her to multinational fame. The references to the American Dream, accompanied by Kim baring her bottom against a giant American flag seemed to incense Piers, who said she was a “grotesque desecration” of what it was meant to represent.

Piers has now turned his attention to Kim after seeing her latest cover shoot for Interview magazine.

“She believes [the American dream] is about flashing her big ass in front of the American flag,” Piers exclaimed.

The broadcaster voiced his beliefs that the country should be all about equality and meritocracy – and then claimed that its most controversial reality star was jeopardising all that.

Describing her as “a woman devoid of any discernible talent” he argued that she was delusional to link herself with the American Dream.

READ NOW: Helen Mirren asked husband if he would ‘f*** her again’ after role 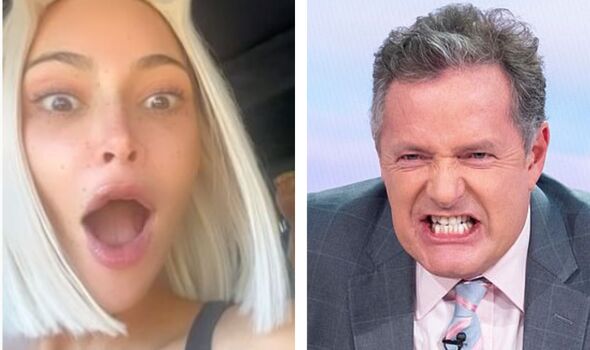 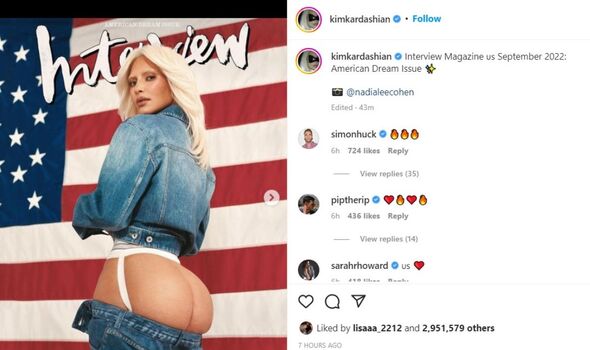 Kim posted her Interview cover across her social media networks this morning and Piers came across the images on Twitter.

It sparked a wave of debate, with some arguing that Kim stood for values of freedom and feminism and that her nudity should be celebrated as such, although others fired back that reality TV stardom was nothing to aspire to.

Piers wrote in a column for the New York Post that the reality star was “barely recognisable from severe and deeply unflattering facial airbrushing”.

He then described her denim trouser suit with pants pulled down, exclaiming furiously that “her ginormous and gravitationally challenged naked backside [was] bursting out of the top”. 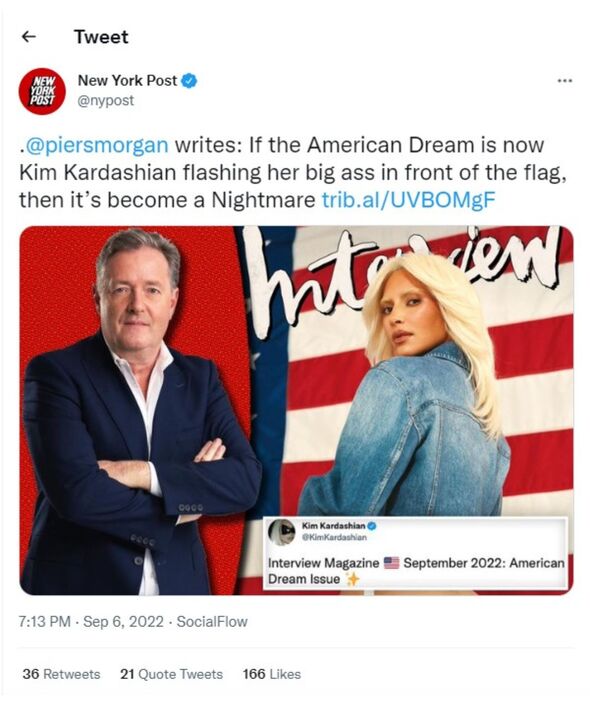 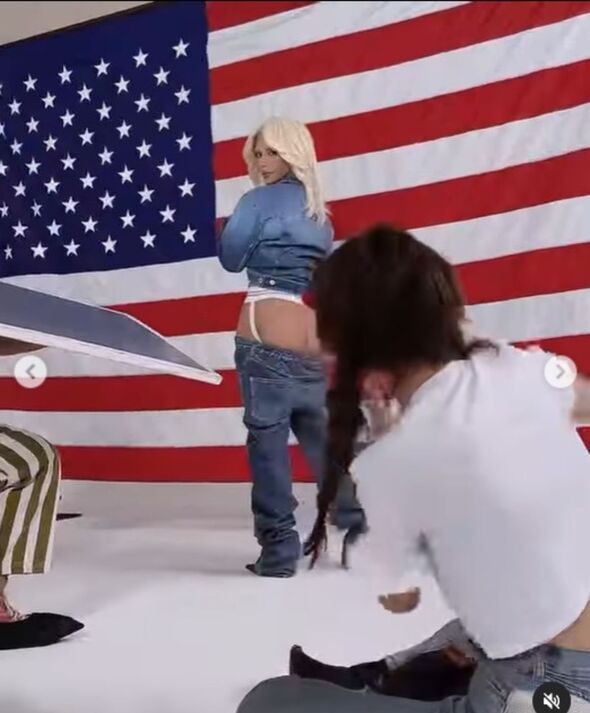 The broadcaster referenced a quote by James Truslow Adams suggesting the American Dream was about “opportunity for each, according to ability or achievement”.

He then claimed he had benefitted from the American Dream when he moved stateside himself back in 2006, to become a judge on America’s Got Talent.

However, Piers made it clear that he wasn’t keen to accept Kim as another star in the entertainment industry, suggesting that her fame is solely about the “cynical exploitation of her naked body”.

Kim has previously defended similar claims, telling the world: “I think my talent is marketing and the business behind selling products and knowing what the customer wants.”

Piers fought back, arguing: “Your only ‘talent’ has been in duping so many people into believing you’re someone worthy of their misguided idolatry and money.”

The broadcaster’s views were then published on Twitter by the New York Post, who explained: “@piersmorgan writes: If the American Dream is now Kim Kardashian flashing her big ass in front of the flag, then it’s become a Nightmare.”

Piers then doubled down by quizzing his own 7.9 million followers: “You think the American Dream is about baring your a** in front of the flag?”

His post quickly sparked a flurry of differing opinions, with @RealTimeBias sneering: “It is actually a sign of how stupid this country has become. Reality TV stars are what people strive for. It’s beyond bonkers.”

@BigTechLegend then hit back wittily: “This is literally the only thing Americans dream about, Piers.”

Then @jeffreykyle pointed to Piers’ friendship over the years with Trump, exclaiming “I think the country started to become a nightmare after… your friend Donald Trump [got] elected.”

Some also argued that part of the American Dream, symbolised by the Statue of Liberty, was about freedom to be whoever you chose, and that meant Kim having the freedom to bare her bottom and exploit the fame it brought her too.

@charlesmcaree1 added a touch of humour to the occasion, joking: “[Kim] wanted to break the internet but she just made a massive crack.”