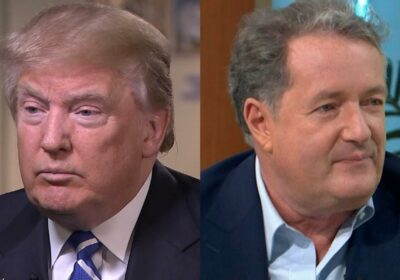 The television host claims he keeps in contact with the former US president although the politician appeared to walk out during their interview in April.

AceShowbiz –Piers Morgan got “a note” from Donald Trump paying tribute to the late Queen Elizabeth. The 57-year-old broadcaster last sat down with the former US president for Talk TV in April when the ex-“Apprentice” star appeared to walk out, but Piers has revealed they have since been in contact following the death of the British monarch in September.

“He sent me a note about the Queen actually. It said, ‘Piers, she was great. Kind regards, Donald.’ Literally. That was after I asked for an interview,” he told MailOnline when asked if he had spoken to Trump since the interview.

Last week, the presenter secured a bombshell interview with Cristiano Ronaldo, in which the soccer star vented his frustrations with Manchester United, who subsequently terminated his contract on Tuesday, November 22.

Piers first became friends with the sportsman when he interviewed him in 2019 and he revealed that chat scored higher in the ratings than his interview with Trump did. He said of Cristiano, “I interviewed him three years ago. He actually likes my crime documentaries. That’s how it all started.”

“So he messaged me out of the blue because he liked my crime documentaries. And he messaged me on Instagram. where he’s the most followed human being in the world. And I suddenly got this thing in my inbox from Christian Ronaldo. I thought, ‘It can’t be.’ “

“The next thing, he was on the phone and we had a chat about crime. He loves the crime docs. And then I interviewed him in Turin – we built up a friendship, we stayed in touch. And then when he was ready to talk this time, he came to me. Just for the record, Ronaldo beat Trump in the ratings. I would happily interview Cristano any time he wants.”

Piers admitted Pope Francis is at the top of his dream interview list. He said, “The pope would be good. I don’t know if he’ll be watching tonight but he’ll be good. Well, I’m a Catholic, so it would be quite a big deal to interview them. But I’ve never interviewed a Pope, so that would be great. He’d be up there.”