Pink hits out at the ‘parenting police’ with VERY sassy post about daughter Willow, eight, playing under sprinklers ‘without a helmet’… as she cheekily brands her critics ‘a**holes’

Pink fired back at the ‘parenting police’ in a sarcastic post shared with her 6.4million Instagram followers on Wednesday.

The Please Don’t Leave Me singer, 39, posted a photo of Willow, eight, having fun with sprinklers, however accompanied the shot with a sassy caption in which she lashed out at her critics, having always been candid about her haters.

While branding her critics ‘a**holes’, she went on: ‘Here’s a picture of my child running through water. It wasn’t even filtered. What a waste of water’. 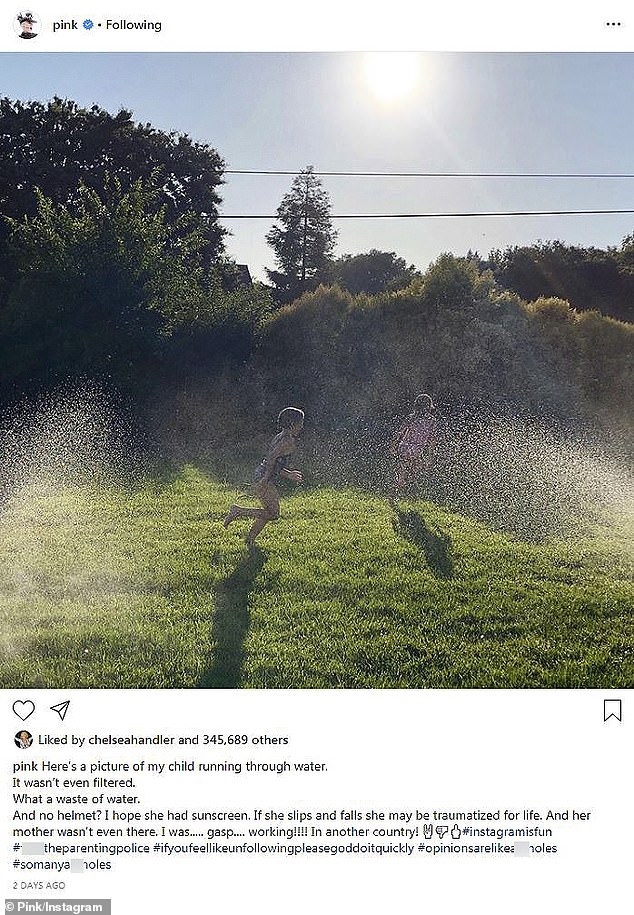 Pushing the point, she went on: ‘And no helmet? I hope she had sunscreen. If she slips and falls she may be traumatized for life. And her mother wasn’t even there. I was….. gasp…. working!!!! In another country!’.

The What About Us singer in April while on The Ellen DeGeneres Show said she would stop posting photos of her daughter Willow and son Jameson, two.

She was slammed for posting a photo of Jameson without a diaper as he and Willow fed a pelican at the beach. 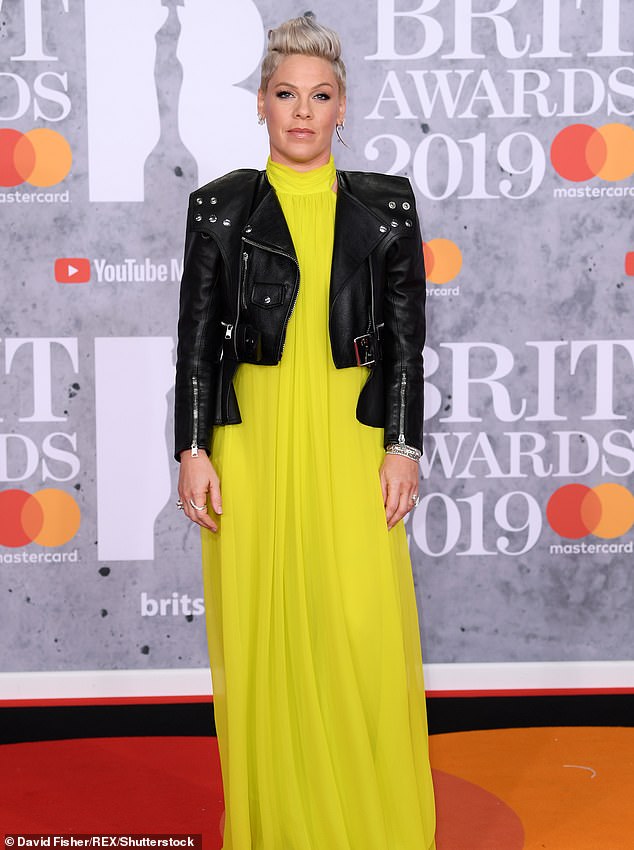 Mother of two: The singer, 39, shown in February, ended her post with several cheeky hashtags, including: ‘#f***theparentingpolice, #opinionsarelikea**holes and #somanya**holes’ 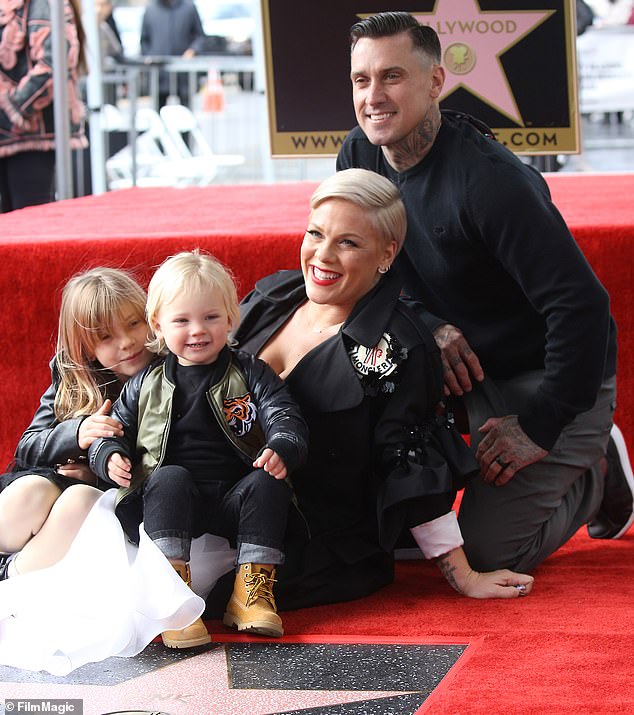 Family portrait: Pink is shown with husband Carey Hart, daughter Willow and son Jameson in February in Los Angeles as she was honored with a star on the Hollywood Walk of Fame

She said: ‘I cried so hard after that because I like to share my family. I’m prouder of my kids than anything I’ve ever done and I won’t share them anymore. I won’t do it’.

She appeared to change her mind and posted a photo Monday of a family trip to the Hamburg Zoo.

An Instagram user questioned the outing in the comments section. 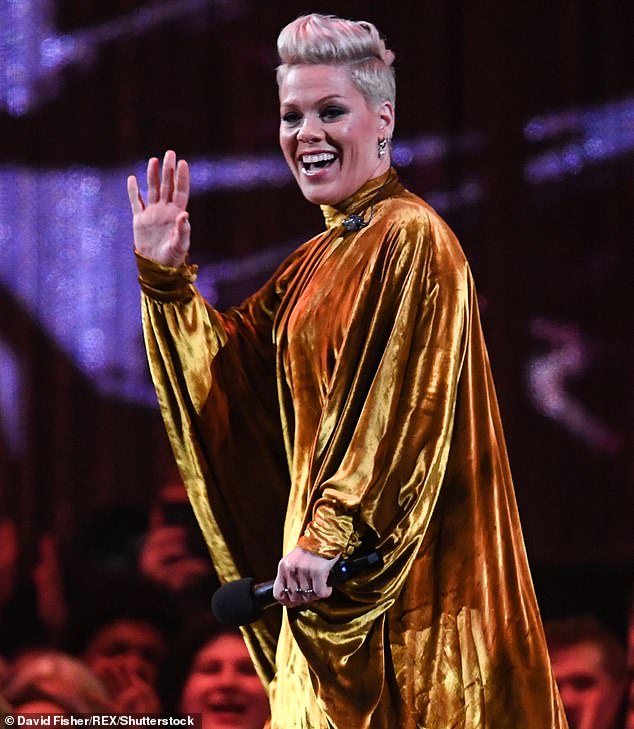 Picture moratorium: The What About Us singer, shown in February in London, while on The Ellen DeGeneres Show in April said she would stop posting photos of her children on social media

‘I’m surprised you go to zoos. Animals shouldn’t be in captivity. If it was a sanctuary, that’d be different,’ the comment said.

The comment did not go unnoticed by the singer, as she penned: ‘I believe in capturing a child’s interest and love for an animal before teaching them about things like captivity. But thank you, the world needed your wisdom today…

‘Here’s the thing though…I don’t remember asking you for your opinion or for your help in raising my child. This isn’t the place for a debate. Call CNN or call the zoo’.

Pink has been on her Beautiful Trauma Tour and performed Wednesday in Stuttgart. The singer has been married since 2006 to former motocross racer Carey Hart, 43. 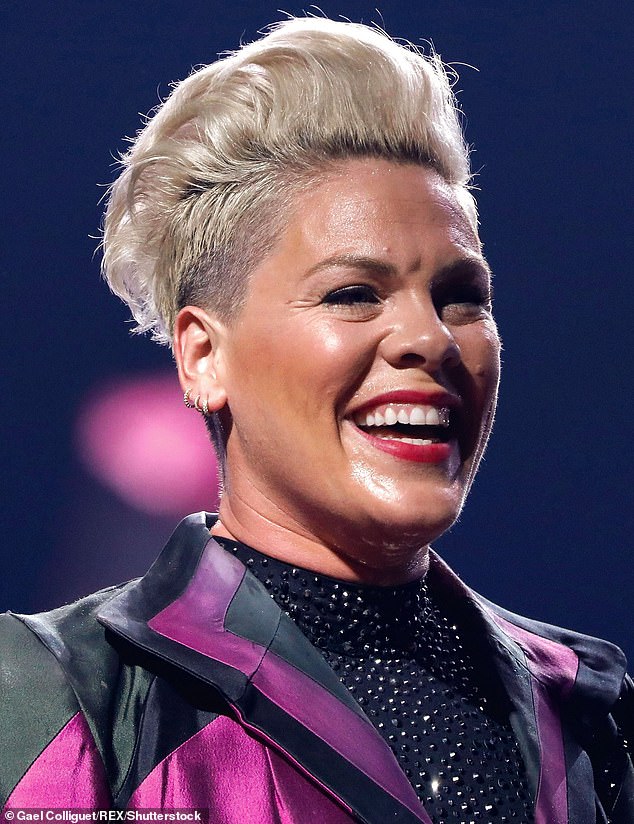 Busy star: Pink, shown earlier this month during a concert in Paris, has been on her Beautiful Trauma Tour and performed Wednesday in Stuttgart