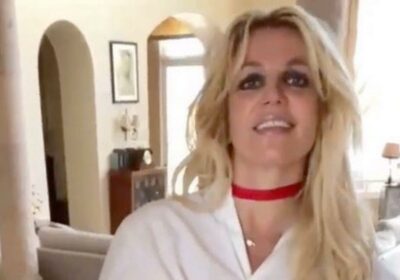 Britney Spears has opened up on her worries over her pregnancy with fiancé Sam Asghari.

The 40 year old, whose fans believe she's already hinted at the baby's gender, took to her Instagram feed to post a lengthy message to her 40.6million followers, explaining that she's "scared of making a mistake".

Sharing that she could go on an extended break from the music industry following her conservatorship win, she said: "Let's make it a 10 year break [crying with laughter emojis] … with a baby on the way," with a baby emoji.

Britney continued: "this morning was "I'm so scared to make a mistake … Will I be thoughtful enough ??? Will be instinctive enough ???" My mom and I always butted head … she was a mindful mother which that's there is in LA …"

Launching into a story about her mum Lynne, 66, she went on: "If anyone was sick … she would talk on the phone with a doctor for 40 minutes before using her own brain … but let's be MINDFUL and talk about it !!! Now ME … I always got judged and was told I was doing the wrong thing …"

Baby One More Time hitmaker Britney, who is already mum to Sean, 16, and Jayden, 15, went on to share how her youngest son once had an "extremely high" temperature once and her "heart went into my stomach" over it.

After sharing how she nursed him back to health, she said: "My first record came out when I was 16 and I got pregnant at 24 … I thought about it last night … I was a baby raising 2 babies with 17 cars outside my house !!! I didn't know how to play the game …"

Britney, whose ex Justin Timberlake told a reporter to "go away" when asked about her news, then teased potentially coming out with a podcast to talk about her pregnancy, but decided against it as she realised it's "going to be ok".

Speaking about her private life with Sam, she went on to share that it's the "little things" she missed and added: "Sex is great when you're pregnant".

She ended her message by thanking singer Ariana Grande for sending products from her make up line to her, to which Ariana replied: "queen !!!!! you deserve every single ounce of love and joy that this life has to offer thank you & i’m so glad you’re enjoying your gifts," with two fairy emojis.

It comes after Britney's other half Sam spoke out about the news of her pregnancy as he posted a photo of two lions with their foreheads touching as they look lovingly down at their little cub.

"Marriage and kids are a natural part of a strong relationship filled with love and respect," he started his post before continuing: "Fatherhood is something i have always looked forward to and i don’t take lightly."

"It is the most important job i will ever do," he added with a praying hands emoji.

Celebrity friends have since shared their congratulations to the happy couple, including Paris Hilton, who said: "Congratulations sis!! I’m so excited for you!! Love you!!!" followed by a celebration emoji, a heart eyes emoji and a hearts emoji.

For all your updates on Britney Spears and Sam Asghari, sign up to our daily OK! newsletter.