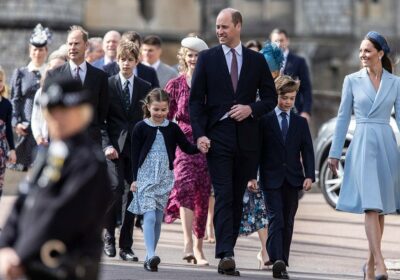 Easter was a time of celebration for the young royals, as not only did they surely enjoy mountains of chocolate, but they also had a royal sleepover at Windsor Castle.

Prince George and Princess Charlotte, alongside younger brother, Prince Louis, stayed at the Queen’s residence with their parents, the Duke and Duchess of Cambridge following the Easter service on Sunday. There were plenty of other royals who stayed the night including Prince Edward, Lady Louise Windsor, Zara Tindall, Princess Beatrice and her husband Edoardo Mapelli Mozzi, their baby daughter Sienna as well as Beatrice’s stepson, Wolfie.

WATCH: The Queen’s great-grandchildren are all grown-up as they attend Easter service

Zara’s husband, Mike Tindall, was also present, alongside the couple’s eldest daughter, Mia, who attended the service with her parents.

It’s not very often we get an insight into the parenting style of William and Kate, but according to former royal chef, Darren McGrady, they’re surprisingly relatable.

The sleepover came after the royals attended an Easter service

Talking to Coffee Friend, he explained: “When I [started working for Princess Diana] it was much, much different and more relaxed at Kensington Palace. It was less formal, it was family style, all the food was placed on the sideboard for the Princess and the boys to help themselves.

“If she wanted a coffee, she preferred instant. She would come in the kitchen and make herself one and offer to make me one.

“One of the things with William I have noticed is that, like Diana, he and his family love to cook, they love to be together and doing things together. They also, like the Princess, allow their children to be children. You see them eating cookies, you see them even making cookies.”

Mia Tindall was one of those at the sleepover

Duchess Kate previously admitted she loves to get the kids involved in cooking – and they loving making pizza. Kate said: “I’ve done that with George and Charlotte – making pizza dough. They love it because they can get their hands messy.”

She continued: “I really enjoy making pizza dough with George and Charlotte.”

Darren revealed: “Princess Diana always wanted the boys to be more ‘normal’ by letting them experience things as Royal children and then just ordinary children. You definitely see that with William and Kate now.”