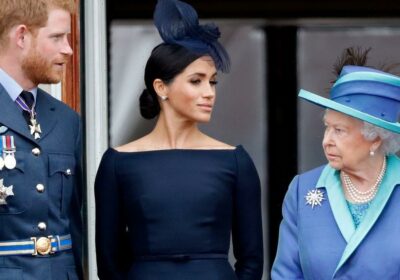 Prince Harry and Meghan Markle have shared a moving tribute in honour of the late Queen following her death, which was announced by Buckingham Palace on September 8.

The Duke and Duchess of Sussex are currently in the UK away from their children Archie, three, and one year old daughter Lilibet – who is named after Her Majesty Queen Elizabeth II.

Prince Harry travelled to Balmoral, where the Queen passed away, while Meghan remained in London.

Harry, 37, and Meghan, 40, shared a tribute on their website, Archewell, which was blacked out in memory of Her Majesty.

The backdrop of the website read: "In Loving Memory Of Her Majesty Queen Elizabeth II 1926-2022."

Harry's relationship with the monarch has been strained for several years following his and wife Meghan's move to step down as senior member of the Firm back in 2020. The couple made the decision in a bid to secure their financial independence while also maintaining a level of privacy from the media.

The couple then moved to Canada before setting up a permanent base in California, where they live in a high-security home near Hollywood's A-list stars.

While at the time of their move they vowed to continue to serve the Queen, he was stripped of his military title as Captain General of the Royal Marines, a role he took over from his late grandfather. He is also no longer Honorary Air Force Commandant of the Royal Air Force Base Honington, or Honorary Commodore-in-Chief of the Royal Naval Commands’ Small Ships and Diving.

During their first year living abroad, they also made several accusations about their time as working royals in an interview with Oprah Winfrey, including that a member of the the Firm had "concerns" over how dark the colour of their son Archie's skin would be.

Meghan said she had suicidal thoughts while being an active senior member of the family but was denied help when she asked for it.

She also claimed Prince William's wife Kate made her cry days before her wedding to Prince Harry in 2018, but "owned it" and apologised.

Since then, Harry, who is also coming out with a bombshell new memoir, has returned to the UK only a handful of times, including for Prince Philip's funeral, the unveiling of his late mum Princess Diana's statue, and the Queen's Platinum Jubilee.

Their last visit in June 2022 didn't appear to go well though as talks between Harry and his father Charles, who is now King, was "edgy" while it's been reported that his talk with The Queen only last 15 minutes in a "formal" meeting at Windsor Castle.

It's expected that Harry and the rest of the Royal Family will have to put their ongoing feud on hold while they join together to mourn Her Majesty's death.

As the funeral will take place 10 days following her passing, Meghan and Harry will most likely make their return to the UK to mourn with the family and pay their respects in person.