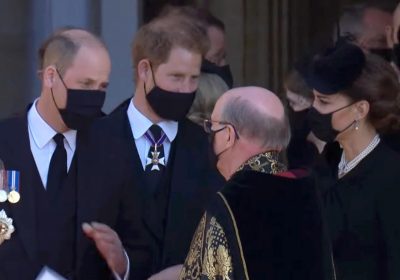 Prince Harry and Prince William‘s long-awaited reunion was one of the things everyone was waiting to see at Prince Philip’s funeral and they shared a sweet moment together after the service.

The Duke of Edinburgh was laid to rest on Saturday afternoon (April 17) at St. George’s Chapel at Windsor Castle in Windsor, England.

The brothers, who hadn’t seen each other in a year, were separated by their cousin while walking in the funeral procession before the service and then they were seated on opposite sides of the chapel.

After the service, the Harry, William, and Kate Middleton were seen chatting with each other while they walked back to Windsor Castle alongside other members of the royal family. Photographers did not capture the moment, but it was caught on video. Watch below!

Make sure to see all of the photos that were taken inside the funeral service.

Click through the gallery for photos of Prince Harry, Prince William, and Kate Middleton at the funeral…