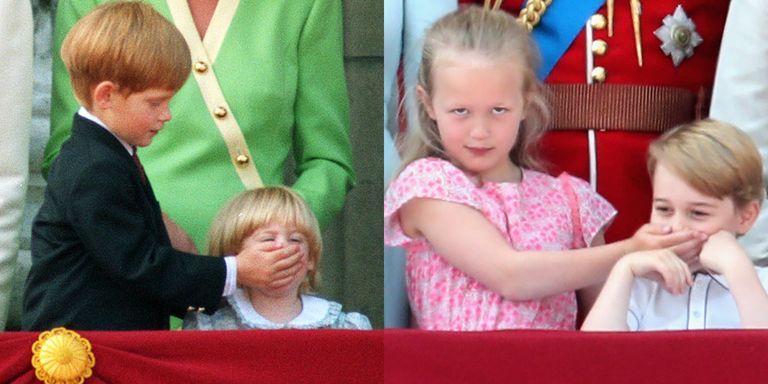 Prince George and his cousin Savannah Phillips stole the show at Trooping the Colour on Saturday when she shushed him on the Buckingham Palace balcony; but they weren’t the first royal tots to pull off the stunt. Nearly thirty years ago, Prince Harry pulled off the same move with his cousin, Princess Beatrice.

People points out that when the Duke of Sussex was five years old, he covered his two-year-old cousin’s mouth during Trooping the Colour in 1990. It looks like having a mischievous side runs in the family.

For reference, this is what Prince Harry and Princess Beatrice (sister of Princess Eugenie and eldest daughter of Prince Andrew, the Queen’s third child) look like as adults.

They were also both at Trooping the Colour last weekend, but they let Savannah and Prince George take over the antics.

“Savannah pretended to conduct as the national anthem was playing, and George joined in the fun,” a viewer told People. “But when Savannah realized it was probably not what they should be doing, she stopped George from saying any more.”

In addition to covering her cousin’s mouth, Savannah was also seen helping Princess Charlotte follow along with the program and cheering enthusiastically as the Royal Airforce flew over the palace. She was truly out there living her best life.

The seven-year-old is the first child of Peter Phillips (Princess Anne’s son and Prince Harry’s cousin) and Autumn Kelly. She has a six-year-old sister, Isla, who was also present at Trooping the Colour.