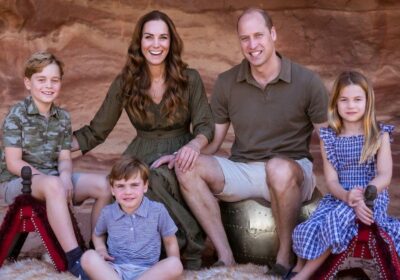 The Duke and Duchess of Cambridge and their children are believed to have moved into their new Windsor home.

Prince George, Princess Charlotte and Prince Louis are joining the co-educational private Lambrook School near Ascot in Berkshire after the family set up home in Adelaide Cottage in Windsor’s Home Park.

Prince William and Kate Middleton are seeking a life in the country away from the goldfish bowl of their official residence Kensington Palace in London in a bid to put their children first and give them more freedom.

They had been known to have set their heart on outdoorsy prep school Lambrook, with its 52 acres of grounds, for their youngsters where fees will cost William and Kate in excess of £50,000 a year.

The family will use the pretty 19th century Adelaide Cottage as their base after the Queen gave them permission to lease the four-bedroom Grade II listed home, which belongs to the Crown Estate.

It was built for Queen Adelaide in 1831 and is nestled just a 10-minute walk from Windsor Castle in the private Home Park.

Kensington Palace confirmed last month that the family would be moving to Adelaide Cottage before the school term begins.

A royal source said: “This is very much a decision that two parents have made to give their children the ‘most normal’ start possible.

“KP can be a little bit of a fishbowl. They wanted to be able to give George, Charlotte and Louis a bit more freedom than they have living in central London. It’s very much a decision that’s been led by the kids.”

William and Kate will retain Kensington Palace’s Apartment 1A, which was refurbished with £4.5 million of taxpayers’ money in 2013, as their official residence and their working base, which will continue to house their office staff.

They will also keep their 10-bedroom Norfolk country mansion Anmer Hall, which was a gift from the Queen, has a swimming pool and tennis court and underwent large-scale building work at their own cost.

The downsizing to Adelaide Cottage, which is not considered vast, means William and Kate’s full-time nanny Maria Teresa Turrion Borrallo will live elsewhere for the first time, as will other staff including the housekeeper and the chef.

The source said the Duke and Duchess were very conscious of how their move stands in contrast to the cost-of-living crisis impacting the nation.

Asked whether the couple was mindful of the economic difficulties facing many who would not be able to afford such opportunities, the source said: “They absolutely are.

“It’s something they have thought long and hard about and this is a decision they have not taken lightly.

“It would have been extremely difficult for them to continue on as senior working royals if they were based in Norfolk.

“What they have basically done allows them to put the kids first, but also to continue on doing what they do all day, every day.”