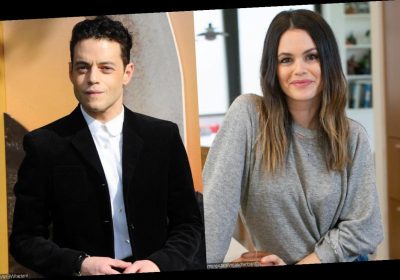 Recalling the time the ‘Bohemian Rhapsody’ star reached out to her over his high school photo, the former star of ‘Hart of Dixie’ admits to be ‘super bummed’ by how he handled the matter.

AceShowbiz -Actress Rachel Bilson was left “super bummed” after her old high school pal Rami Malek requested she remove a funny throwback photo of the pair from her Instagram page.

“The O.C.” star thought the decades-old snap of the then-“nerdy” students on a school trip to New York was “adorable”, so she decided to share the memory on social media in the months leading up to the 2019 Academy Awards, where Malek was nominated and went on to win Best Actor for his role as Freddie Mercury in “Bohemian Rhapsody“.

“I had posted a throwback of us from our senior trip to New York, Broadway. We’re super nerdy, [it was] like, the dorkiest picture of both of us, but I throw it up because I think it’s funny and it’s so important to be able to make fun of yourself,” Bilson explained on the “Armchair Expert with Dax Shepard” podcast. “And he had a gold chain [on in the photo], and I’m like, ‘Rami, where’d you get the gold chain…?’ I’m just being funny, we were good friends.”

However, Malek apparently didn’t appreciate the blast from the past, and reached out to Bilson, asking her to take the shot down.

She shared, “I don’t usually check the DMs [direct messages] on my Instagram and maybe a week goes by and I actually look, and I have a message from Rami, but it wasn’t like, ‘Hey, how are you? Blah, blah, blah, blah.’ It was straight to, ‘I would really appreciate if you’d take that down, I’m a really private person’.”

The curt message made Bilson “start sweating” as she didn’t expect her childhood “good friend” to react in that way. “I was like, ‘Oh, s**t, OK…’,” she continued.

“I guess he didn’t like the picture of himself, and I’m friends with his stylist, and she’s like, ‘Well, it’s not a great picture of him.’ I’m like, ‘OK, I’m sorry…’ We were 16…! It was what it was…, but it was right before the Oscars, and I remember [friend and ‘The O.C.’ creator] Josh Schwartz being like, ‘You did him dirty! He’s about to be nominated.’ I was like, ‘What do you mean? This was my friend, it’s a funny picture!’ “

Bilson is still baffled by the controversy caused by her snap from their days at Los Angeles’ Notre Dame High School, and is disappointed Malek didn’t see the funny side to the post.

“I guess I should have found something more flattering [to share]?” she pondered. “I don’t know… but I removed it, and I even wrote him a really nice message, like, ‘I’m so sorry, go get the Oscar, you’re doing amazing,’ and I never hear anything back, which is fine…”

“I was super bummed because he was always so nice, and we were good friends…,” she added.

“I’m a big fan of not taking yourself seriously, especially at that level of fame and talent, but look, he wants to be super respected, it’s his thing, so I respected it, I took it down. I was just a little bummed at how it was handled. I thought it was adorable…”