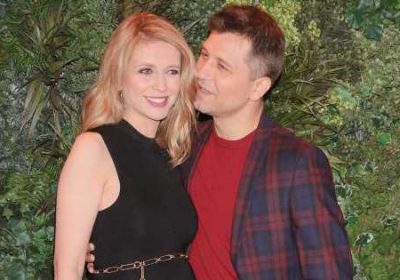 Booking in a date night can be hard at the best of times, let alone when you have a child and another on the way.

But Rachel Riley and her husband Pasha Kovalev managed to finally enjoy their first night off from parenting duties after welcoming daughter Maven into the world in December 2019.

The pair attended a Cabaret All Stars show over the weekend in London, and Rachel, 35, took to Instagram to post a picture of herself and Pasha enjoying mocktails.

“You can tell we need to get out more, as the gorgeous nipple tasseled lady splashed around in the champagne glass, both Pash and I were reminded of the baby in the bath,” Rachel said, followed by laughing face emojis.

She added: “So glad to finally be out, out! Thanks for inviting us Denise.”

The pair were snapped on the red carpet before heading into the event, looking as happy as can be.

The Countdown star looked beautiful and radiant in a black fringed dress that hugged her figure.

Rachel accessorised her ensemble with a belt and black heels and smiled for the cameras while cradling her blossoming baby bump.

Pasha, 41, was looking super suave as he sported a red and navy tartan blazer, red jumper and black velvet trousers.

Rachel and her Strictly Come Dancing beau Pasha shared the news that they are expecting baby number two back in April.

They then sat down with OK! for an exclusive interview and revealed exactly when they will become a family of four.

“We wanted baby number two,” Pasha told OK!. “So, we're looking forward to welcoming them into this world, sometime in October.”

When asked how he and Rachel were feeling about their wonderful baby news, he told us they are over the moon.

“Absolutely fantastic,” he beamed in response to the question on fatherhood. “We are very excited."

The Strictly star, also told OK! how excited they were at the idea of being parents to two children under the age of two.

“I think it's great because this helps them feel closer together,” he gushed. “It will give them a chance to bond better because having a bigger age gap between them could leave them feeling more separated.”

Pasha went on to explain that being eight years older than his own brother made him want to have children who were close in age.

“It’s nice to have the kids closer together so they can grow up together,” Pasha said.

“We’re very excited. It’s what we wanted to do and two is the magic number for us,” he added.