The truly bonkers life of Brian: He says Flash Gordon is the Queen’s favourite film, asked the Dalai Lama about his sex life, and insists he’s too busy to die of Covid. Read JENNY JOHNSTON’s surreal encounter with Brian Blessed

Brian Blessed has just been battling the man from the bank. Poor bank man! I don’t imagine any amount of call-centre training can prepare you for having an irate Brian on the phone, unable to access his cash.

‘I wasn’t able to get anything out of the hole-in-the-wall,’ he bellows, apologising for the fact that he’s a few minutes late for our call.

‘I ended up talking to some bugger somewhere who said, “You should use your bank in the area, not the hole-in-the-wall” — and I said (his voice rises from a bellow to a blast) “But you’ve closed all the bloody banks!” They have, too. What kind of a mad age are we living in?’ 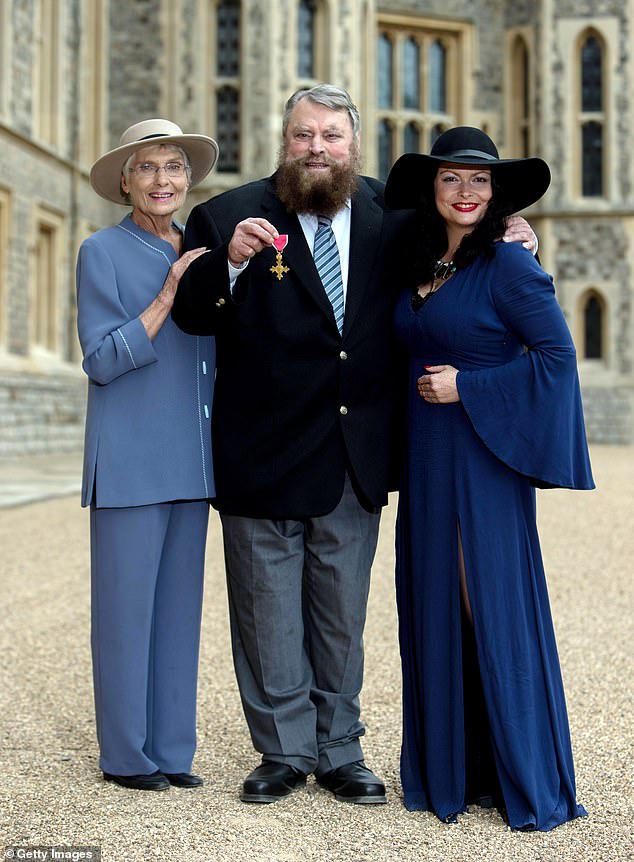 Pictured: Actor Brian Blessed, with his wife Hildegard and daughter Rosalind, after he was made an Officer of the Order of the British Empire (OBE) by Queen Elizabeth II

Quite. And if Brian says things are mad, be assured they are off-the-scale bonkers. He is one of our biggest actors, in every sense, but he’s a little bit that way inclined himself.

Interviewing him is a bit like trying to cling to a steamroller as it careers down a hill. It’s an entertaining ride but you wonder whether you’ll get out alive. Our conversation covers Covid (‘Which can f*** off’), his wife’s cancer, the Dalai Lama’s sex life, his friendship with Katharine Hepburn, yetis, his plans to climb Everest with Boris Johnson and his desire to know if his estranged daughter has made him a grandfather yet.

Oh, and there’s his role as Prince Vultan of the Hawkmen in Flash Gordon back in 1980 —the film he now says, somewhat improbably, is the Queen’s favourite.

This week, Blessed, 83, claimed the Queen had told him: ‘We watch Flash Gordon all the time, me and the grandchildren.’ He insisted that she even begged him to repeat his catchphrase from the film: ‘Gordon’s alive!’

Blessed is continually being asked to chant the slogan. ‘People cheer when I say it, young and old alike, everywhere I go.’

Once, he says, he was at the North Pole when a Soviet submarine emerged through the ice. The captain popped out and asked him to say you-know-what. He certainly boomed it out in 10 Downing Street at the behest of then Prime Minister David Cameron. ‘It’s his favourite film. I stood on a chair in the Cabinet Room.’

Doesn’t Brian ever get tired of shouting it? ‘Never. It’s a cry of celebration.’ A new high-resolution restoration of Flash Gordon is out now. It will delight old fans and, he hopes, introduce the film to a new generation. 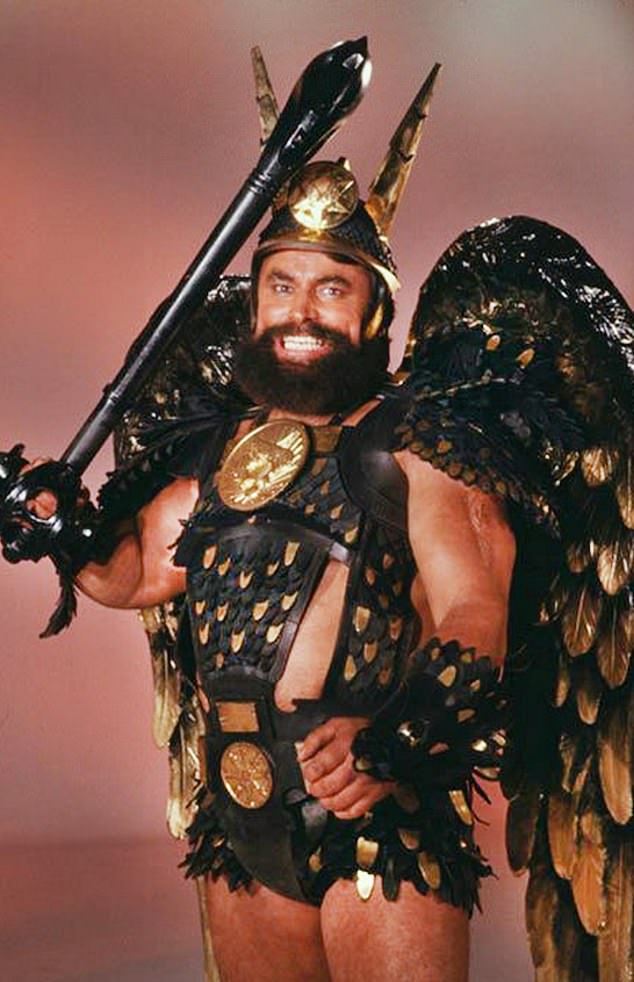 Oh, and there’s his role as Prince Vultan of the Hawkmen in Flash Gordon (pictured) back in 1980 —the film he now says, somewhat improbably, is the Queen’s favourite

Despite Brian being perhaps a bit bonkers, his 42-year marriage to actress Hildegarde Neil sounds blissfully happy. It produced their daughter Rosalind. But before that, there was another marriage to American actress Ann Bomann, which he tends to gloss over.

His daughter from that marriage, Cathie, is acknowledged but not bellowed about.

Brian was not a part of Cathie’s life but the pair were reconciled briefly 30 years ago and, bizarrely, she agreed to accompany him on a trip up Mount Kilimanjaro.

‘She did very well and got to the summit, although she became quite ill with the altitude and lack of oxygen, so I had to give her lots of aspirin and water,’ he has said. ‘We got on marvellously; but when we got back, she said, “Nah, Dad, I don’t want to see you any more now. You live your life and I’ll live mine.”

‘There was no argument; as soon as we got home, that was it.’

He tells me there has been no contact since. He has no idea if Cathie has made him a grandfather. ‘She wants to lead her own life with her mother … but I took her up Kilimanjaro and that was a kind of farewell. I haven’t seen her since.’

Even before he has called me ‘Sugar Lump’ (a career first), it’s clear this is going to be a crazy encounter.

‘It’s a wonderfully healthy thing when people think you are a bit mad,’ he says. ‘At the end of the film Zorba The Greek, when the two main characters are on the beach, Zorba says something like, “You know, boss, I love you most of all but you have got to learn to be a little mad.” And I am very mad.’

He is certainly a one-off. He is also perhaps the only actor who can claim to be an explorer (he has climbed Everest and was the oldest man to travel to the North Pole on foot) and a trained cosmonaut (he went to Russia to train for an as-yet-unrealised trip into Space).

That he is also the voice of Grampy Rabbit in Peppa Pig might be one of the most unremarkable things about him. ‘It’s the most successful series in the world. The Chinese have bought it for several billion. We only get an ordinary wage, though.’

He was always known for his physical bulk and takes great pride in his still-enormous biceps. He tells me he remains ‘as strong as a bull’.

‘I do two hours per day weights and exercise, then I go on a two to five-mile run. My biceps are still 17, 18 inches … I have to be in condition to do the things I want to do.’

Having conquered Everest and the Arctic, he wants to go on a yeti-hunting expedition, hopefully to ‘Canada, Sumatra and a remote part of Bhutan’. He also says he’s heading into Space. ‘We must. We are all children of the stars.’

It seems spoilsporty to point out that most people of his age are worrying about whether it’s safe to venture to the village shop. You’re really going into Space, via Bhutan?

‘That’s right. I have people, explorers, coming for meetings now. Go for it. You’ve got to follow your dream.’

Frankly, he is just fed up with illness. He tells me that Hildegarde has just emerged from a cancer battle. They met on the set of a Yorkshire TV drama and he was smitten. ‘She was, and is, the most beautiful woman I had ever seen. Clever, too. Rosalind has her brains, thank God.

‘But everybody is going through the mill, aren’t they? My wife had cancer this year — lymphoma, which was horrific to watch. I didn’t think she’d recover, but she did.

‘Then she had pneumonia, which I think was worse because it had her screaming with pain. Then her heart had taken a beating. So we were in and out of the hospital. But she didn’t die and now she’s making a wonderful recovery, sitting in the garden, talking to the dogs. And I’m as happy as a sandboy.’

He says he never felt afraid. ‘No, no. I’ve never known fear. Death does not exist for me. It’s just that she would stop operating on this level.’

He is by no means a cartoon character. ‘I don’t get outraged. I’m a very cheerful guy but I’m passionate. My biggest love in life is silence and peace. If I speak loudly or I’m noisy it’s when I choose to be, but in actual fact I love a walk, I love being quiet. Years ago, I spent five days with the Dalai Lama and we got on famously. We meditated together.’

What did the Dalai Lama make of him? ‘He recognised that I had this kind of magnetic centre and he said, “You have great willpower.” And I talked to him about his sex life. I said, “You have got gorgeous skin and a beautiful body. Don’t you miss sex?”

‘No one asks His Holiness questions like this but he said (he does the Dalai Lama’s voice), “Sometimes I think of a beautiful woman and I do my mantras louder and take a cold shower. It’s practical, Brian.”

‘Oh, we got on like a house on fire. I think he loved that I wasn’t treating him like a god.’

On other subjects, he is eye-wateringly open. We talk about his casting in the 1971 film The Trojan Women, which saw him get his pecs out for his co-star Katharine Hepburn.

He was mostly on a horse and she was quite impressed ‘although she kept saying “Brian rides well but Spencer was better”, or “Brian has big, thick arms but Spencer’s were bigger”. Eventually I had to tell her to shut up about Spencer.’

Spencer, of course, was Spencer Tracy, the love of Hepburn’s life.

Brian and Katharine struck up a relationship that was more than a friendship but never quite got sexual. A chaste affair, then? ‘That’s right, it was wonderful.’ Did you want it to be more? ‘Oh yes, yes. I deeply regret that the relationship didn’t go further. I found her very romantic and very sexy. You know, I was 30 years younger but it didn’t matter. She was very youthful.’

He insists he is a woman’s man. ‘Ninety per cent of men bore the arse off me. Women are my religion. Whatever I’ve learned in life is basically from women. Women are appearing everywhere and thank God.

‘We have them in the House of Commons and we need them. Have you ever seen such a bloody boring lump of humanity as we have this day with men?’

He knows Boris Johnson, it transpires (‘He wants to climb Everest with me,’ he says), but thinks Nicola Sturgeon is doing a much better job with Covid. ‘I like Boris enormously. He has drive and energy and I think he is going to be all right. But Sturgeon, she has a staggering subtle simplicity, a combination of heart and mind.

‘I think she’s doing a fine job. I think she’s adorable. Women don’t have a bloody silly ego and a need to prove themselves all the time.’

So which one would he rather share a tent with, on Everest? ‘I think you could rely on them both. They both have a wonderful sense of humour, a twinkle.’

He hates politicians who don’t twinkle. President Trump is a ‘clown, an idiot, a joke’.

His voice has risen again. My ears hurt. Then he is mumbling at someone in the background and announces that our time is up.

‘Sugar Lump, I have to go,’ he says. ‘I have to take my wife to Waitrose.’ He tries an almost-whisper. ‘I’m quite hen-pecked really.’

I do hope Hildegarde lets him wear his wings.

Flash Gordon 40th Anniversary 4k Restoration is in cinemas and available to own now.