He recently revealed he and wife Tess Daly had ‘moved on’ from his sexting scandal with the glamour model.

And Rhian Sugden set pulses racing as she slipped into a tiny yellow lingerie set on Sunday, the same day Vernon Kay entered the I’m A Celebrity castle.

The beauty, 34, displayed her eye-popping assets and tiny waist in a racy semi-sheer yellow bra as she posed up a storm. 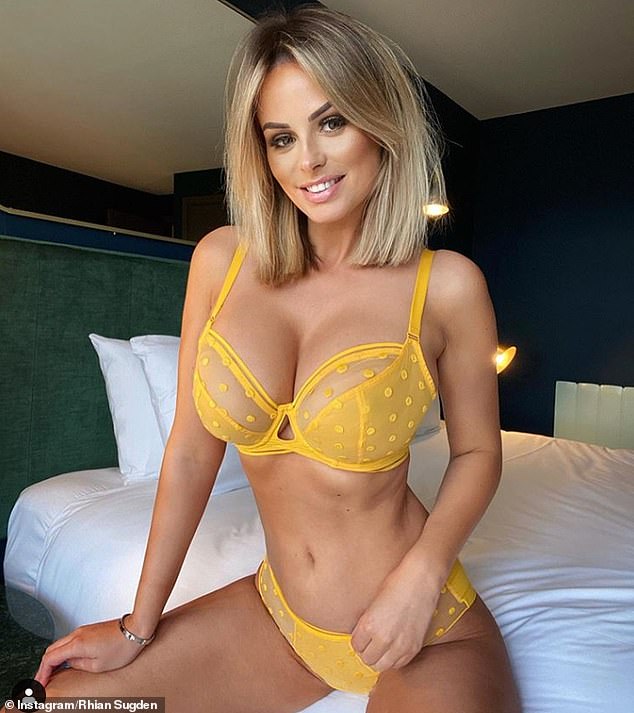 What drama? Rhian Sugden set pulses racing as she slipped into a tiny yellow lingerie set on Sunday, the same day Vernon Kay entered the I’m A Celebrity castle

A pair of matching underwear teased a glimpse of Rhian’s pert derriere while showcasing her bronzed legs.

Her blonde tresses were styled sleek and straight while her pretty features were enhanced with a rich palette of make-up.

Making no reference to Vernon’s impending stint in the reality show, she simply captioned the snap: ‘Mellow yellow.’

Vernon and Rhian’s daily contact came to light in 2010 after he pursued her on Twitter, text and email for four months, with the blonde bombshell later claiming he also tried to set up a secret liaison with her in a hotel room. 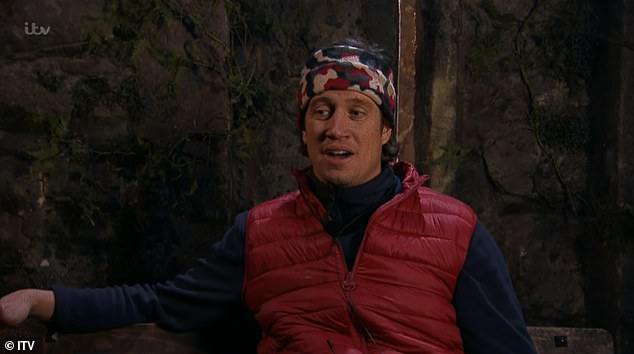 IAC stint: Vernon and Rhian’s daily contact came to light in 2010 after he pursued her on Twitter, text and email for four months

Afterwards, she assured Tess that they never met up alone and it was nothing more than a ‘close friendship and flirty messages’. She concluded with offering her ‘sincerest apologises’ and wishing the both of them happiness for the future.

Vernon was famously forced to make a public apology to his wife Tess on BBC Radio 1 back in 2010 after a set of their saucy messages came to light.

He went on to promise live on air that he would no longer contact Rhian or the four other women he had been caught messaging at the time. He continued to host his radio show and present All Star Family Fortunes following the scandal.

It was then revealed the pair had got back in touch in 2015 with Vernon sending hundreds of texts asking to ‘reconnect’ with the model. 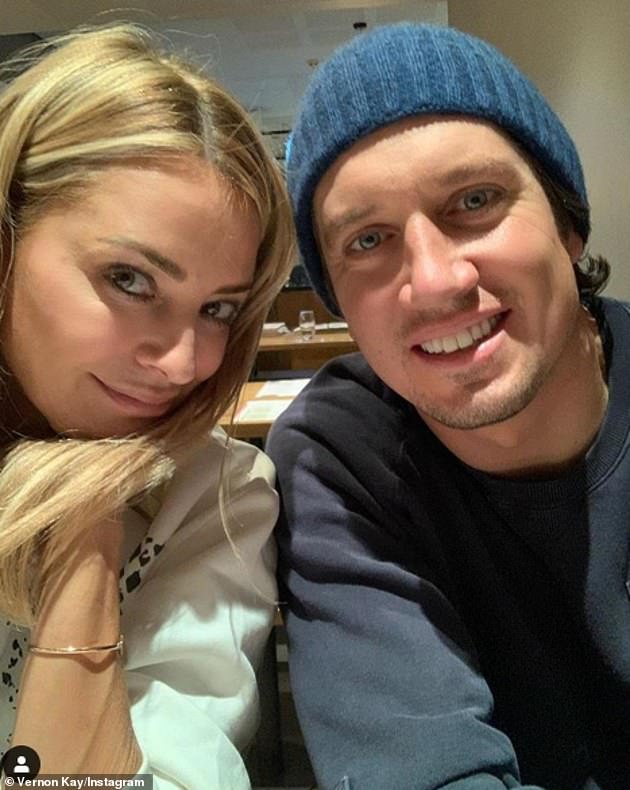 10 years on: Earlier this month, Vernon said he and Tess had ‘forgotten’ about the scandal

Earlier this month, Vernon said he and Tess had ‘forgotten’ about the scandal.

He told the Mirror: ‘All that stuff is in the past, we’ve forgotten about that, we’ve moved on. It’s all gone. It’s disappeared.’

In June, Rhian broke down in tears as she discussed her ‘sexting scandal’ with the married star in 2010 on documentary Page Three: The Naked Truth. 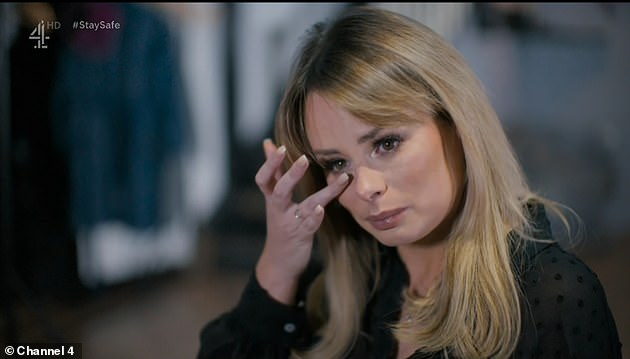 Emotional: In June, Rhian broke down in tears as she discussed her ‘sexting scandal’ with the married star on documentary Page Three: The Naked Truth

The glamour model appeared on the Channel 4 documentary to talk about her experience in the industry, and when talking about the scandal she admitted that it was the lowest point of her life.

Rhian lamented the fact that the presenter ‘got away with it’ after publicly apologising to wife Tess.

The model also claimed that her career was ruined and she lost ‘so much weight’ from stress during the scandal.

Rhian started the interview by boasting about her former Page Three modelling career and how it was the ‘best time’ of her life as she got free drinks, parties and Champagne on tap. 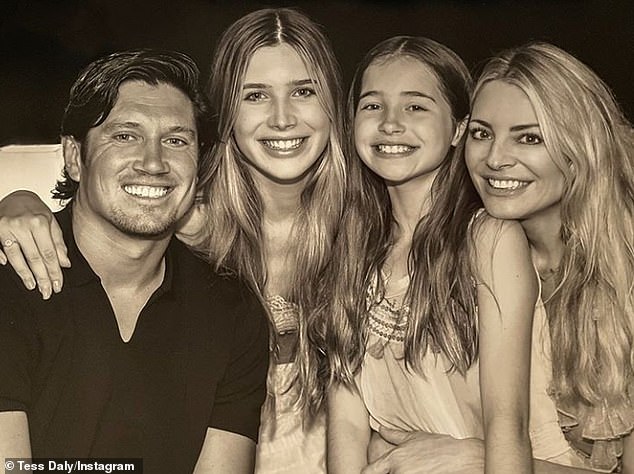 Sweet: Tess Daly threw her support behind husband Vernon ahead of his I’m A Celebrity debut as she shared a rare snap with their daughters Phoebe, 16, and Amber, 11, on Sunday

Although the chat soon took an emotional turn as Rhian admitted: ‘But then some of the girls crossed the line into scandal and it raised people’s profiles. That’s what happened to me.’

She continued: ‘There was an attraction there for both of us. I was a Page Three girl and he was Vernon Kay. He’s a good looking fella.

‘He came to Manchester and that was the first night we’d met. Things just stemmed from there.

‘It was all probably more bravado on text from him when he’d had a drink, ‘Oh, you look fit in that picture, sexy, wish I could see you more.”

Rhian then spoke about the backlash after their texts were exposed, she said: ‘If I’d met this man, slept with him and had a full blown affair with him then I would understand the backlash. It was like I’d literally killed somebody.’

She then started crying as she recalled how her career was ruined and she had gone from having £15,000-a-month in her bank account to nothing.

Wiping away tears, the model, who is now married to soap actor Oliver Mellor, said: ‘I lost so much weight from stress. I have never been so low, apart from that time. It makes me upset. I am going to ruin my make-up.

‘It was awful, my whole family… they must have been so embarrassed. He just got away with it, it ruined everything for me. I was going up and up with my career, when that came along. I wish I had never met him.’

She emotionally added: ‘He got to give an apology on the radio and just got to carry on with Family Fortunes, ironically. It still makes me feel physically sick.’

Claim to fame: The most successful British track athlete in Olympic Games history

Phobias: Any animal that moves

Biggest misconception you want to dispel in the castle: It will be nice for people to see me doing something other than running

Role in the camp: Cook

Miss most: Coffee, my wife and children

Phobias: Human faeces. If I see one, it is over! I am hoping the camp toilet will be enclosed

Biggest misconception you want to dispel in the castle: Nothing. I don’t think I am that interesting

Role in the camp: Person who will muck in with anything

Miss most: My family and routine at home

Biggest misconception you want to dispel in the castle: People think I am glamorous as I have played Liz for so long but I am not

Role in the camp: Cleaner

Miss most: Dogs and my husband, Jon

Dream campmate: Ricky Gervais – he would keep us all going

Biggest misconception you want to dispel in the castle: People see me with sparkles and fake tan but nobody knows what I am like

Role in the camp: Keeping spirits up and the cleaner

Miss most: My warm and comfy bed

Dream campmate: Any celebrity with an intriguing background

Biggest misconception you want to dispel in the Jungle: I think I have always been the same throughout my career – so I don’t have any.

Role in the camp: Person to keep spirits up.

Miss most: My family.

Dream camper: Anybody who has won the Super Bowl!

Phobias: I am not a fan of spiders or confined spaces and I don’t know what I am going to be like when I get there!

Biggest misconception you want to dispel in the castle: I don’t think I have any as people just know me as the news and current affairs person!

Role in the camp: Shoulder to cry on.

Miss most: My boys, husband, dog and Mum.

Dream campmate: Madonna, Gary Lineker and Jamie Oliver to cook for us. I think you could have some really geeky chats with them!

Claim to fame: Author and podcaster

Phobias: Heights. My legs go wobbly and you can’t rationalise it

Biggest misconception you want to dispel in the castle: I am not that controversial so nothing

Role in the camp: Mum, friend and the giver of hugs

Miss most: My husband, Tom, and my three children

Dream campmate: The Queen, Judi Dench and Ant Middleton so he can help us with all the survival skills

Phobias: Arachnophobia, fear of heights –just about every phobia

Biggest misconception you want to dispel in the castle: It will be nice for people to see me for who I am rather than my EastEnders character

Role in the camp: Chatterbox and little sister

Miss most: My daughter. It’s going to be the longest we’ve been apart

Dream campmate: Denzel Washington would be awesome. I would listen to every word he said

Phobias: It’s just easier to say what I am not scared of. I have so many phobias

Biggest misconception you want to dispel in the castle: On my Radio 1 show, I am always bubbly and energetic but everyone has down moments too, so it will be nice for people to see what I am really like

Role in the camp: Entertainer and the tidy up person –I love a tidy house

Miss most: A nice cool pint of Guinness

Dream campmate: Barack Obama and Liam Gallagher. He would be great entertainment value

Biggest misconception you want to dispel in the castle: I don’t want it to focus on my disability

Role in the camp: Cook/shoulder to cry on

Miss most: My boyfriend, food and my cats