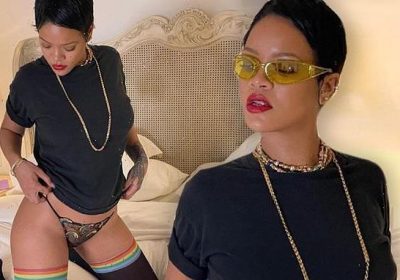 Rihanna set the internet ablaze on Tuesday as she showed off her incredible figure in new lingerie pieces from her Savage X Fenty line.

The 33-year-old superstar announced the release of a Pride-themed capsule collection to benefit five organizations dedicated to helping LBGTQIA+ communities.

Proving to be her own best saleswoman she took to Instagram to showcase a rainbow adorned lacy thong and matching thigh-high stockings in a trio of sizzling snaps. 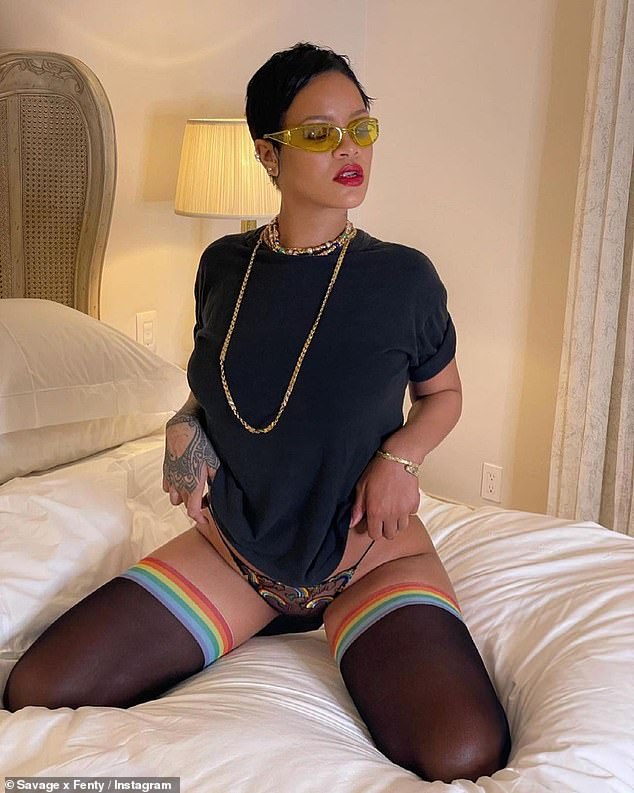 Savage X Pride: Rihanna, 33, announced the release of a Savage X Fenty Pride capsule collection on Tuesday as she modeled a rainbow thong and thigh-high stockings

The pixie-haired beauty looked every bit the seductress as she kneeled on a bed with cream colored linens for the intimate shoot.

She donned a black T-shirt which she hiked up to reveal the lacy G-string which featured rainbows on the front.

Continuing to play up the rainbow fantasy she rocked striped thigh high-stockings and accessorized with yellow sunglasses and a bright red lip.

One snap featured a closeup of her famed curves in the Savage X Pride set next to a colorful tassel, and in another she looked down at her frame while pursing her lips. 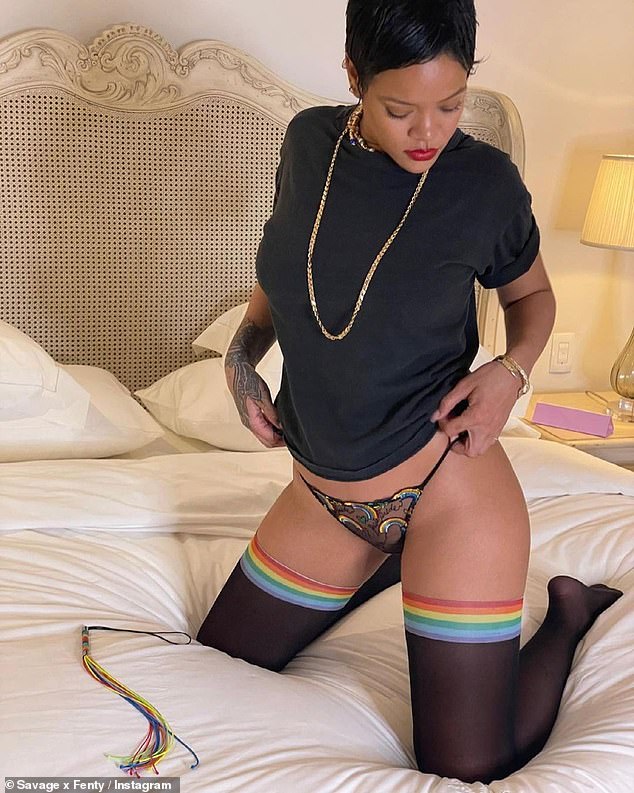 Seductress: The girlfriend of A$AP Rocky continued to flaunt her curves in the rainbow set while kneeling on a bed 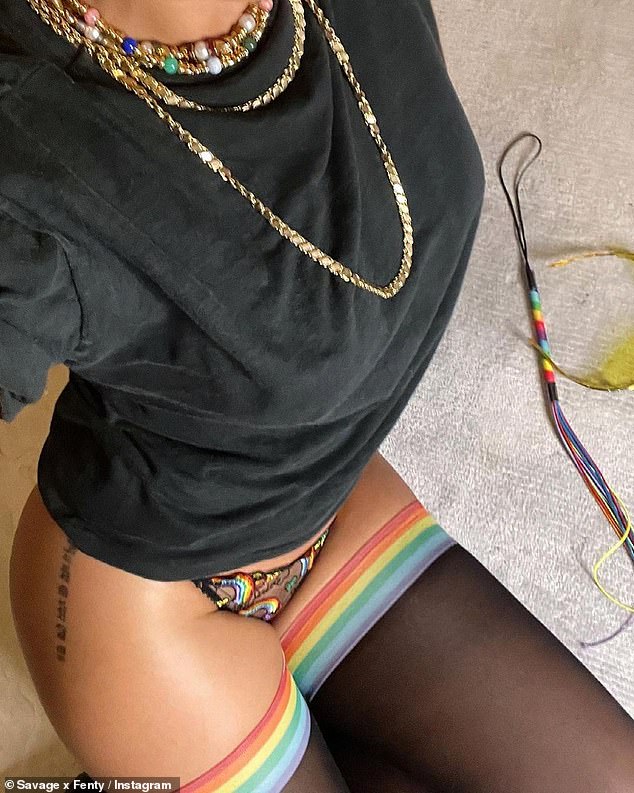 Closeup: A very closeup selfie drew attention to her curves as she lounged on the floor 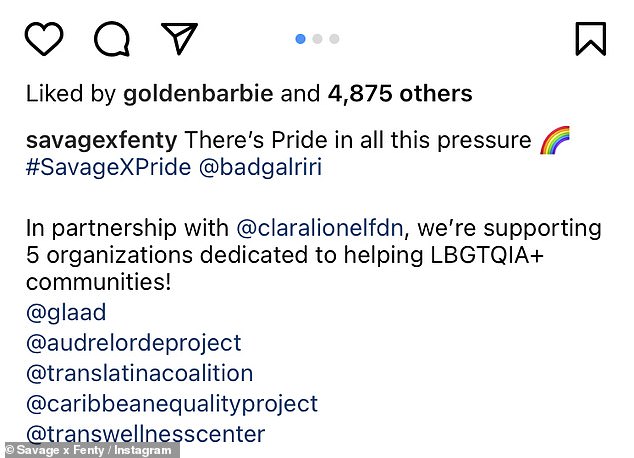 For a cause: The release of select Pride-themed apparel to benefit five organizations dedicated to helping LBGTQIA+ communities

‘There’s pride in all this pressure,’ she captioned the trio of images as she detailed that the pieces were created in partnership with her non-profit the Clara Lionel Foundation.

Sales from the collection will benefit organizations dedicated to helping LGBTQIA+ communities including: GLAAD, the Audre Lorde Project, the Trans Latina Coalition, the Caribbean Equality Project and the Trans Wellness Center.

Other pieces in the collection include unisex silky robes in bright colors, cotton intimate sets, boxers, briefs and athleisure pieces.

And though she has been a fierce ally and advocate of the LGBTQIA+ community over the years, she herself in a committed relationship with A$AP Rocky — who called the Umbrella singer ‘the love of my life.’

Last week the pair were seen packing on the PDA on many outings in New York City, including a makeout session at Barcade and marathon date night night in the Lower East Side where he scooped her up and carried her down the street. 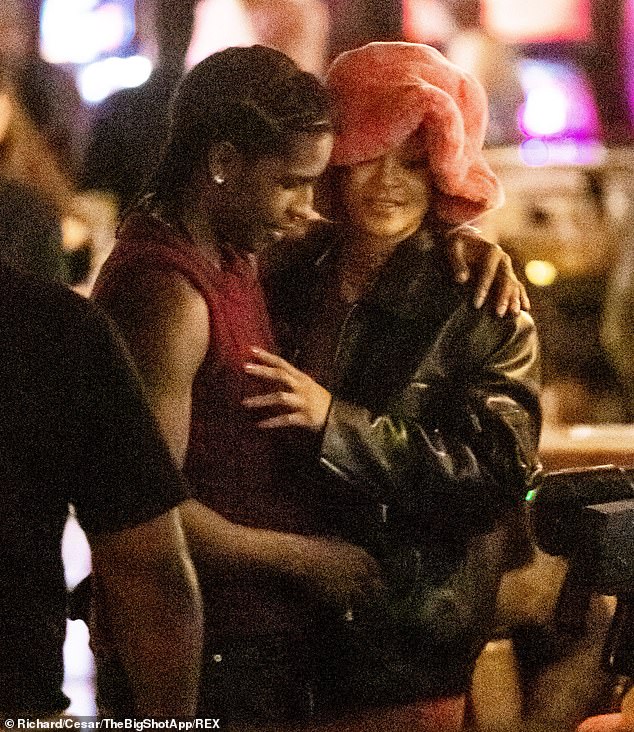 Coupled up: The pair have gone increasingly public with their relationship which began last year after he gushed that she was ‘the love of my life’ in a GQ interview last month; pictured June 24