Home » Celebrities » Robin Thicke Realized He Still Desperately Sought Approval From His Dad Alan Thicke as an Adult: 'Maybe If I'm a Rockstar He'll Hang out With Me'

Robin Thicke Realized He Still Desperately Sought Approval From His Dad Alan Thicke as an Adult: 'Maybe If I'm a Rockstar He'll Hang out With Me' 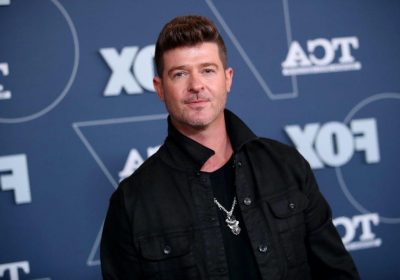 Depending on one’s age, the late Alan Thicke is either the star of Growing Pains or Robin Thicke’s father. Robin, who forged his own path in the music industry, has had a tumultuous career these last few years, from controversial hit songs to his demons airing out in public. Now pulling himself through these, the ‘Blurred Lines’ singer recently spoke to Dax Shepherd about the burdens of having such a famous father and how this affected his life from early on.

IMDb shows how Alan Thicke was a little-known jack-of-all-trades throughout the 1970s as he tried to make a name in entertainment. From his appearances on late-night talk shows to his successful career as a songwriter on hit shows such as Diff’rent Strokes, Alan showed that he had what it takes to dominate the entertainment world in more ways than one.

However, his biggest break came in 1985, when he finally got a chance to shine on a major network sitcom. Growing Pains, which famously unleashed Kirk Cameron and, in later years, Leonardo DiCaprio onto the world, was one of the quintessential sitcoms of the era. It focused on an affluent family trying to make their way through an ever-changing world around them.

As Thicke’s star rose, however, he also had another role. Fatherhood. His sons Brennan and Robin watched as their father went from semi-popular television host and musician to sitcom dad and television superstar. As such, they had someone to look up to. As Robin has noted in several interviews, however, this wasn’t always easy to deal with.

Robin on being Alan’s son

Robin never had a normal childhood. To see this, one can look no further than the anecdote about his babysitter, Wayne Gretzky, getting traded while he was watching Robin as a child. Despite the fame and lofty expectations of having a famous father, Robin wanted to make his name in the music industry from an early age.

He did just that. Robin started training early with his father by his side, developing a love for R&B that later defined his biggest hits. However, with all that talent and clout, everything wasn’t peachy. Robin’s long relationship with actor Paula Patton crumbled around the same time that his biggest hit, ‘Blurred Lines’ was both dominating the music charts and causing discourse due to its regressive lyrics.

Now, Robin admits that he was in a dark place, taking pills, and using drugs and alcohol to cope with his failing marriage, complete with allegations of abuse and the growing infamy that both his song and personal life accrued. Then, in 2016, Alan died after a heart attack. This could have sent Robin on a spiral. However, it made him clean up and focus on what was important.

“I wasn’t in a good place when he passed, and I wasn’t in a better place right after,” He told People. “However, a few months later, I decided to dedicate my time to raising my son, and that really was a big turn for me. Instead of focusing on my music, I focused on my son. That’s how I got through that period.”

Now back in the spotlight as a judge on The Masked Singer, Robin says that the desire to please his father and show that he, too, could get into the realm of the rich and famous. He spoke about seeing his father’s skewed priorities as a child and its toll on him during a recent interview on Dax Shepherd’s Armchair Expert podcast;

“With all due respect to my father and through some therapy, I realized that he was gone a lot by choice. And as a son, that hurts. Like, ‘Why do you have to keep going to another — a cool person’s party? Why can’t you hang out with me? Why can’t you take me places?”

Luckily the therapy started to work. Thicke grew to forgive his late father and realize that despite his warts, Alan loved him.

“Through therapy, I realized that I was still searching for his attention, for his approval. And here I am, trying to be a rockstar to make him proud of me. And because maybe if I’m a rockstar, he’ll hang out with me.”

Robin has seen the good, bad, and ugly sides of fame. He’s been a figure of fame and infamy alike. From his early days watching his father’s rise to fame until today, Robin’s vices are well-documented. Despite this, he appears to be on the right path. However, whether it’s a sign of things to come or a brief moment of introspection remains to be seen. Until then, we can only hope that Robin learned his lesson and can finally come to peace with his past life.