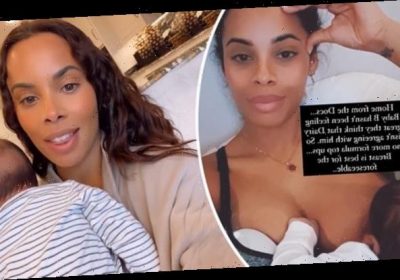 ‘It was too much pressure’: Rochelle Humes reveals she decided to stop breastfeeding son Blake at nine weeks old and says he has a dairy intolerance

Rochelle Humes discussed stopping breastfeeding son Blake at nine weeks old after putting ‘too much pressure on herself’ and learning he has a dairy intolerance.

The presenter, 31, told fans in a Q and A that she’s now solely feeding her son a goat’s milk formula, and said the tot has already started teething.

Rochelle previously documenting her breastfeeding journey after giving birth to her third child in October, and learned in November she may have to change her diet after learning dairy ‘wasn’t agreeing with her son.’ ‘It was too much pressure’: Rochelle Humes, 31, said on Instagram on Friday she stopped breastfeeding son Blake, 12 weeks, three weeks ago after learning he has a dairy intolerance

‘I think he was nine weeks old when I stopped and he’s now 12 weeks.

‘Blake is intolerant to cow’s milk, I think I did share this at the time, I just found it put a lot more pressure on my breastfeeding, it put a lot of pressure on me and it was the first time I’ve done it, so I was quite proud of myself, even just doing nine weeks.’ 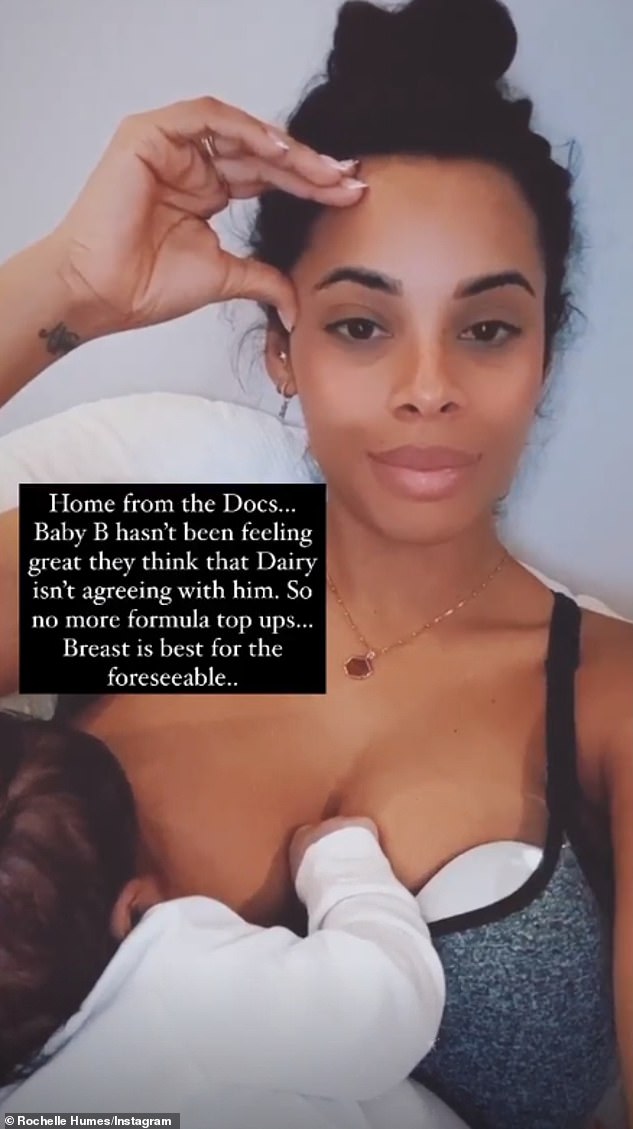 Candid: The presenter told fans in a Q and A that she’s now solely feeding her son a goat’s milk formula it was her first time breastfeeding so she’s proud of herself 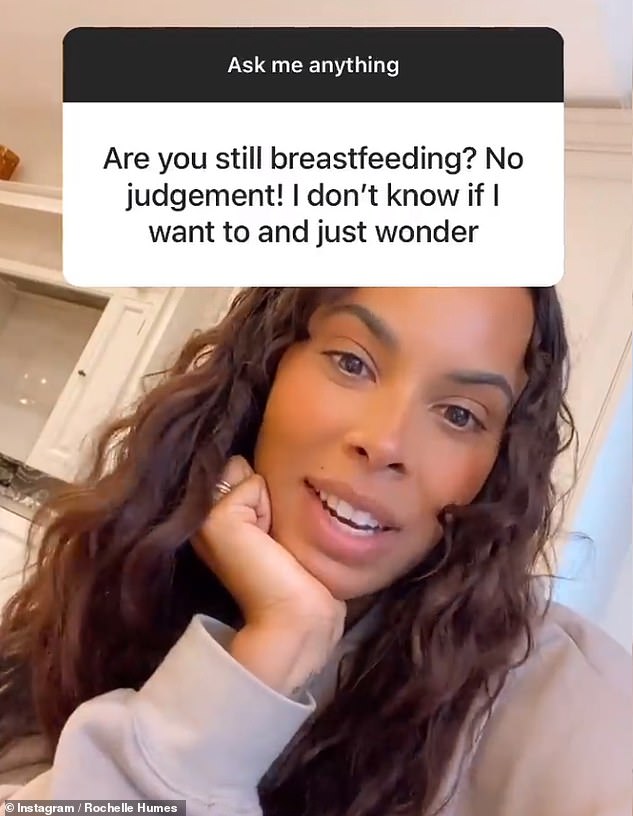 Not now: Rochelle was also asked if she would like more children and she said: ‘I’m currently locked down with three kids, so… no’

‘So yeah I was just proud of myself just doing it for 9 weeks, he’s now on a goat’s milk formula that’s working really well and it’s called Nanny Care if anyone wants to find one.’

Rochelle was also asked if she is planning on having anymore children and she said: ‘I’m currently locked down with three kids, so… no.’

Earlier in the day Rochelle also revealed: ‘I also have a teething baby who is frantically rubbing off the back of his hair,’ before sharing a glimpse of his balding head. 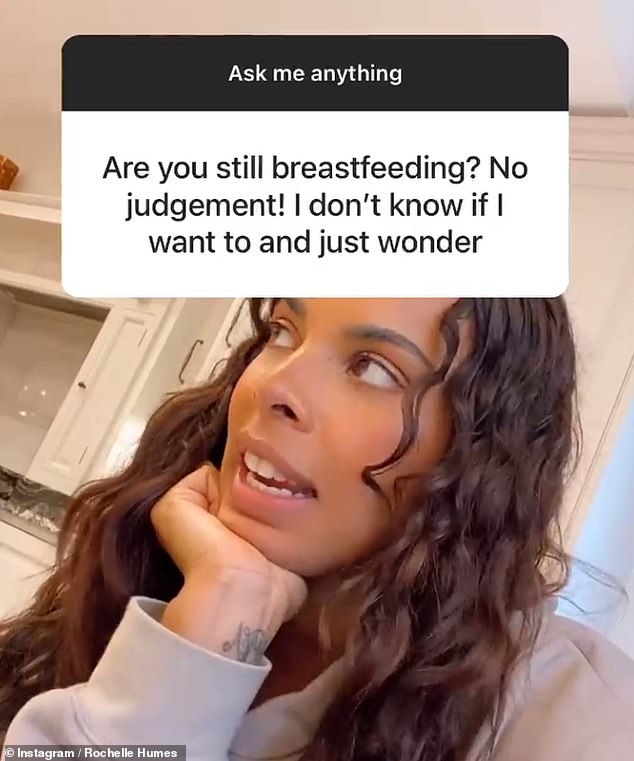 Much better: Rochelle went onto reveal they’re now feeding Blake a non-dairy formula and he’s coped well with the change 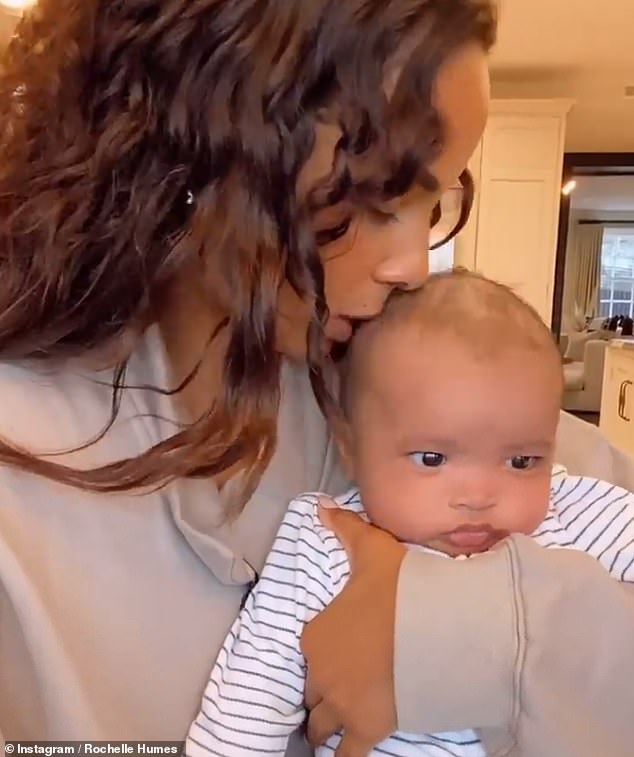 What is the NHS advice for breastfeeding mothers?

The NHS guidance for getting your baby to latch onto your breast is as follows:

Remember to support your baby’s neck but not hold the back of their head.

They should then be able to take a large mouthful of breast. Your nipple should go towards the roof of their mouth.

In November Rochelle shared a candid snap in the midst of feeding baby Blake, who was four weeks old at the time, revealing the tot wasn’t ‘feeling great.’

Rochelle added that she was now going to have to start ‘double pumping’ and adapt to a dairy-free diet.

She penned: ‘Home from the docs… baby b hasn’t been feeling great they think that dairy isn’t agreeing with him.

‘So no more formula top ups… breast is best for the foreseeable.’

Rochelle then revealed that she has started drinking ‘mother’s milk’ tea bags in a bid to boost health lactation.

On Monday Rochelle returned to This Morning for the first since giving birth to little Blake, as she stood in for Holly Willoughby following the Christmas break.

‘It’s quite nice to get out! And not have children around me, it’s really nice! Should I just stay here a little while longer and pretend I’m working?’

The star and her husband Marvin recently took son Blake on his first family holiday as they shared a glimpse of their festive break to Dubai.

The presenter shared a gallery of snaps from the first few days of their getaway after an eight hour journey with Blake and daughters Alaia, seven, and Valentina, three.

In the snaps Rochelle shared a glimpse of the lavish Jumeirah Zabeel Saray resort, where family sized rooms range from £750 to £1,200 per night, including the stunning swimming pool and sky-high ceilings. 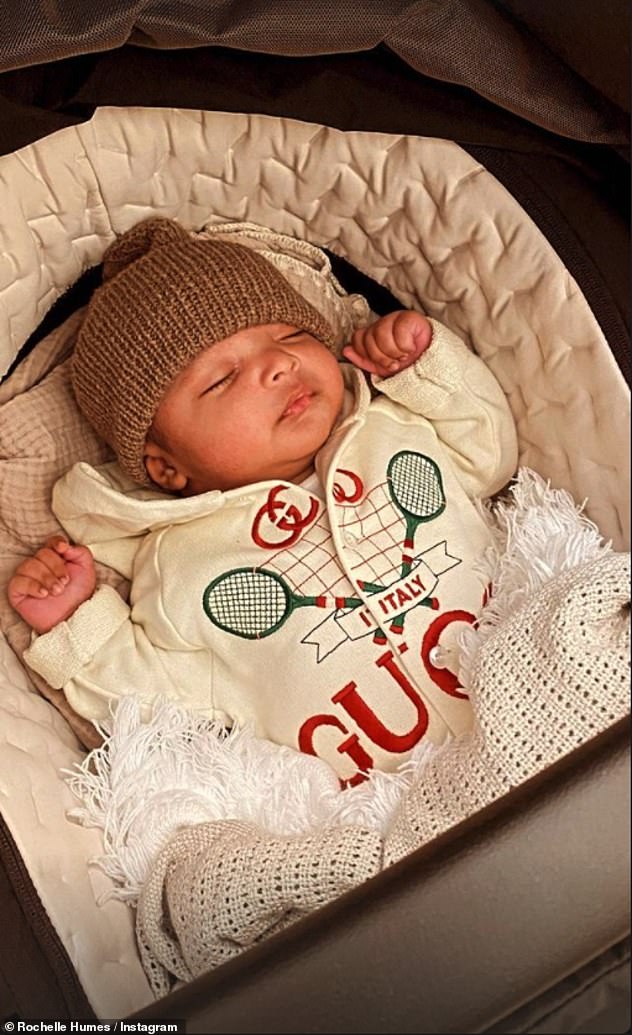 Her love: Rochelle gave birth to her third child, her first boy, Blake, in October. She also shares daughters Alai-Mai, seven, and three-year-old Valentina Raine with her husband Marvin, 35