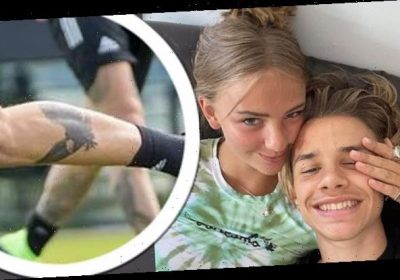 He recently debuted a huge tattoo of an eagle on his calf after getting treated to the body art as a birthday present.

And although Romeo Beckham seems pleased with the inking, often sharing snaps of it to social media, his girlfriend Mia Regan, 18, isn’t quite so impressed.

During a recent Instagram Live, the model told her budding footballer beau: ‘I don’t think any tattooing is good for you, for your bloodstream’. 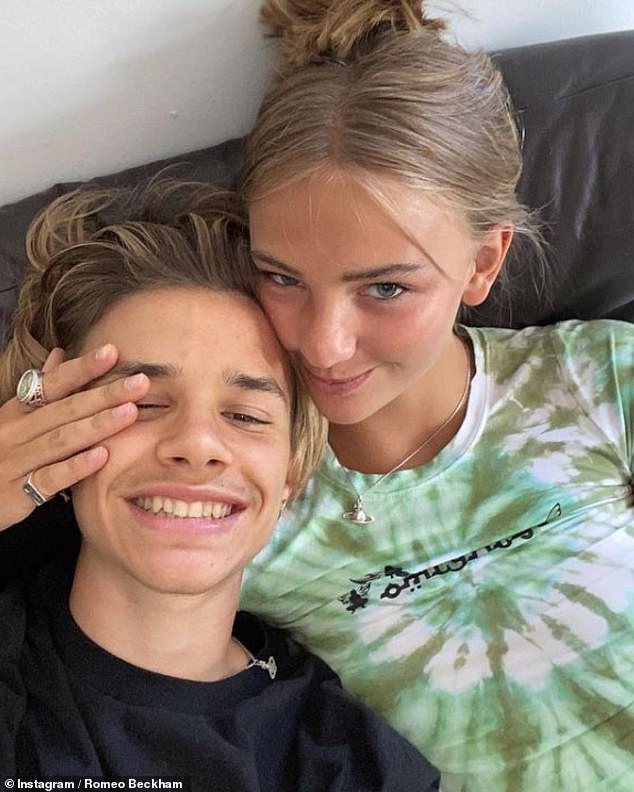 Oh dear: Romeo Beckham’s girlfriend Mia Regan has revealed she’s not a big fan of tattooing after he debuted a huge eagle inking on his calf (pictured together)

According to The Sun, the couple spoke about his new body art on Instagram with Romeo telling fans it was ‘a birthday gift’.

Mia, who has been dating Romeo since September 2019, then made her comments about not being overly keen on tattoos for health reasons.

It is thought that Romeo may have been inked by Los Angeles tattoo artist Doctor Woo, who ha also created pieces for stars such as Adele and Miley Cyrus.

Romeo seems to be following in his father’s keen interest in body art after revealing the large tattoo on his calf while training with the Inter Miami academy players in Florida in January. 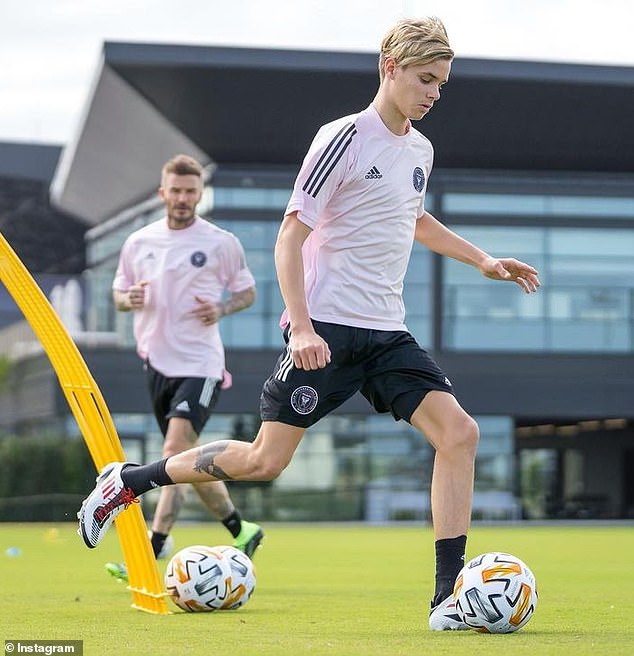 What a treat: The budding footballer got the large tattoo for his 18th birthday and seems to be following in his dad David’s footsteps with a love of body art

Appearing to depict a large eagle in flight, the black ink design is not dissimilar to the lifelike work carried out at his father’s tattoo studio of choice – Hollywood’s Shamrock Social Club.

It is also strikingly similar to the eagle tattoo inked beneath David’s left armpit, albeit on a notably smaller scale.

Romeo’s is also thought to have gone under the needle on another occassion, with the teenager previously revealing a small tattoo on his rib-cage while holidaying with his family in Greece last August.

Romeo is not the only Beckham child to develop a liking for body art, with older brother Brooklyn, 21, quickly cultivating a large collection of tattoos following his 18th birthday in 2017. 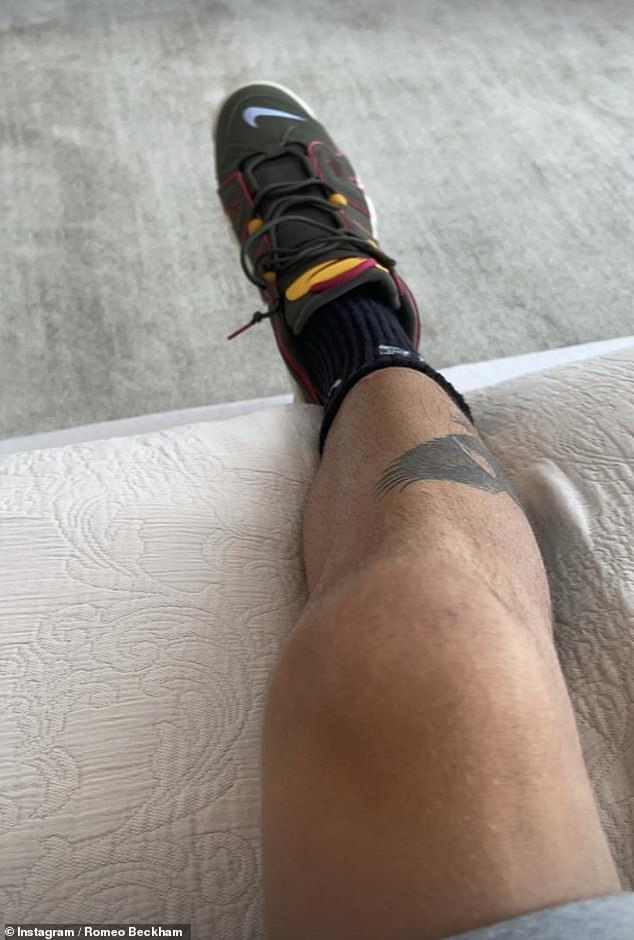 Flaunting it: Romeo often shows off his impressive tattoo on Instagram (pictured Thursday) 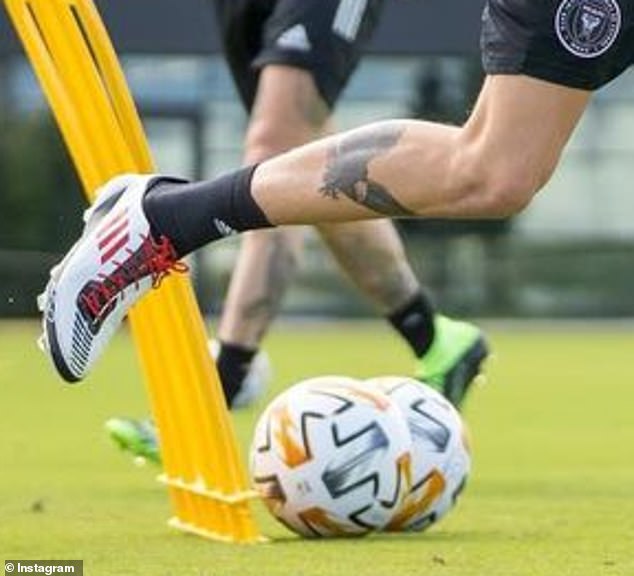 There it is: The 18-year old revealed the inking while training with dad David and the Inter Miami academy players in Florida in January 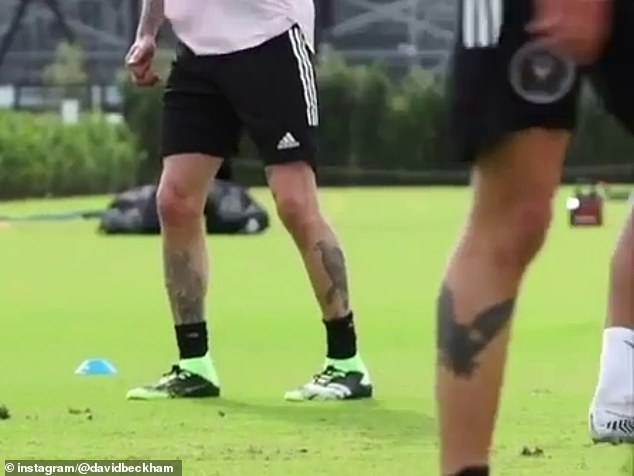 Following suit: Romeo has followed his father and older brother Brooklyn by getting the tattoo

David, 45, is understood to have more than 60 designs inked across his body, with many dedicated to his fashion designer wife Victoria, their four children and his illustrious playing career.

As well as his children’s names, the former footballer’s tattoo collection also includes a drawing from daughter Harper, nine, on the palm of his hand and the number 99 – a reference to Manchester United’s treble winning season – on his little finger.

Other inkings include a religious scene depicting Jesus being carried by three cherubs, believed to represent him and his three sons, a scene of a woman in a forest over the right-hand side of his chest and an image of Jesus below his rib-cage. 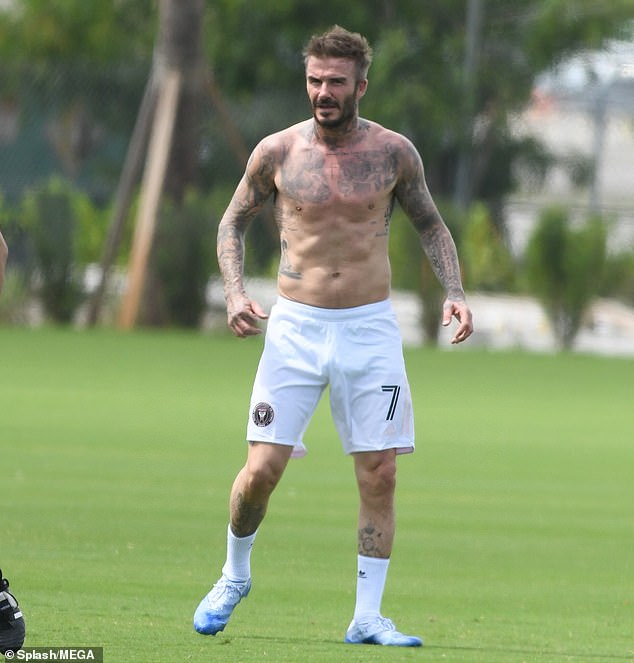 Covered: Dad David is understood to have more than 60 designs inked across his body, with many dedicated to his fashion designer wife Victoria, their four children and his illustrious playing career

He first went under the needle in 1999 after the birth of his oldest son, Brooklyn.

Speaking about how he chooses his designs, the star previously explained: ‘They’re about the important people in my life, who I want to have with me always.’

The family are currently in Florida ahead of the new MLS season, which has yet to be given a formal launch date as the United States continues to grapple with the impact of COVID-19. 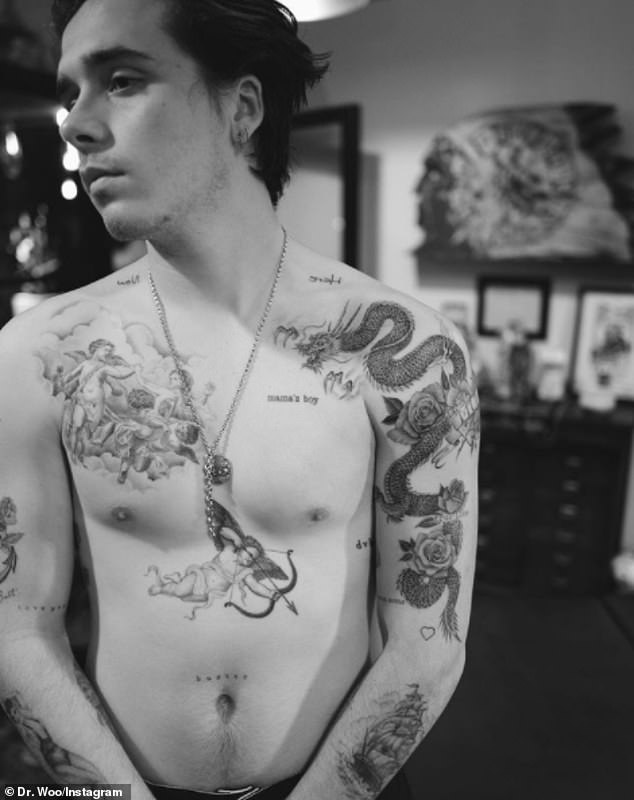 Getting involved: Romeo is not the only Beckham child to develop a liking for body art, with older brother Brooklyn quickly developing a large collection following his 18th birthday in 2017 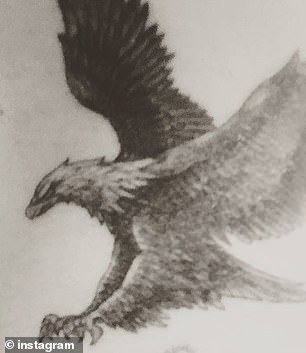 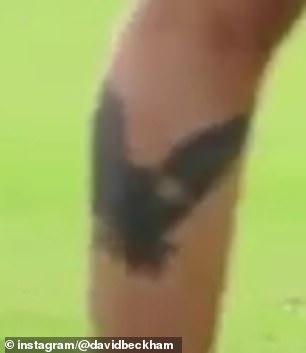 Similar: Romeo’s new inking strikingly like the eagle tattoo beneath David’s left armpit, albeit on a notably smaller scale