Ron Howard Honors Andy Griffith's Birthday in a Moving Tweet: 'Andy Was 2nd Only to Dad' 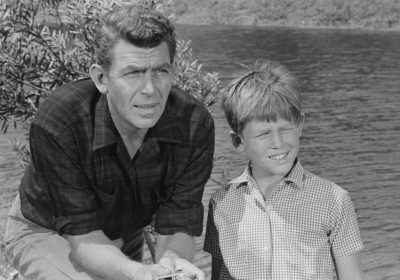 Celebrated filmmaker Ron Howard looked back warmly at would have been Andy Griffith’s 95th birthday.

Griffith, who died in 2012 at age 86, and Howard remained good friends throughout the years since The Andy Griffith Show went off the air in 1968.

The Matlock star told the Television Academy Foundation that as the Opie Taylor actor grew older, the two naturally became not only colleagues, but friends. They stayed in touch throughout the years as well.

For his part, Howard spoke of Griffith as a mentor of sorts who treated him kindly but also treated him as an equal, expecting a good day’s work out of the young actor, and instilling in him an understanding for the workings of a set.

“He treated me really well, but he made it a learning experience, not in a stern, taskmaster kind of a way, but I was really allowed a real insight into creativity and how things work and why some scenes were funny and others weren’t,” Howard told PopEater. “That insight has served me really well over the years. Andy was really kind to me, always playful and fun, but, by the same token, he wanted to get the work done.”

In a moving tweet remembering Griffith shortly after what would have been his birthday, Howard expressed his appreciation for the actor.

“Andy would have turned 95 last Tuesday,” the A Beautiful Mind director tweeted. “As I say in The Boys, the memoir I wrote with my brother, Clint, Andy was 2nd only to Dad as the biggest male influence in my early life. Book comes out on October 12 & can be preordered”

In Ron Howard: From Mayberry to the Moon, author Beverly Gray wrote that “Griffith acknowledged that the bond between Sheriff Taylor and Opie in many ways mirrored [Howard’s father] Rance and Ronny’s real-life connection.”

The Oscar-winning director recalled the set of the classic comedy as one part work and another part family; that’s how Griffith wanted it.

“Howard speaks of Griffith’s balance between dedication and joy as a model for his own on-set behavior: ‘There was a lot of laughter on the set, and at the same time, hand in hand with that laughter, was very good work being done on a consistent basis,’” Gray quoted Howard as saying.

“Anything less than 100 percent effort would just never fly – not because he would start yelling, but because simply that wasn’t the way we worked on the show. . .,” Howard said. “There was a feeling of ‘Hey, here’s what we’re doing, and therefore it’s important. People are gonna watch it. It represents us and let’s do it right.’”