Home » Celebrities » Sally Nugent causes a stir by asking ITV’s Ed Chamberlin ‘What are you doing this summer?’

Sally Nugent causes a stir by asking ITV’s Ed Chamberlin ‘What are you doing this summer?’ 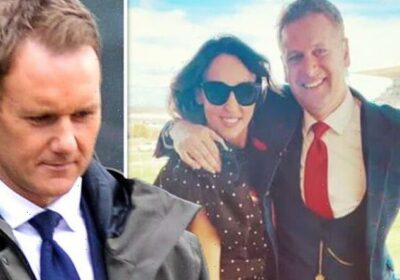 BBC Breakfast presenter Sally Nugent has sparked a frenzy amongst her social media followers after asking ITV’s Ed Chamberlin what he’s doing this summer following Dan Walker’s exit from the BBC earlier this week. Taking to Instagram, Sally shared a picture of herself posing with fellow broadcaster, sports presenter Ed Chamberlin as they enjoyed a sunny day at the races together.

What are you doing this summer? @edchamberlin

In view of her 52,700 followers, the newsreader shared a snap of herslef with the sports presenter.

“What are you doing this summer? @edchamberlin,” she added, alongside a winking face.

The snap showed the duo posing for a sunny snap at the races, while Sally stunned in a polka dot midi dress.

After sharing the picture, some of Sally’s fans were convinced that she was dropping hints over who would be her new BBC Breakfast co-host after Dan’s exit.

Instagram user 70_andy_11 wrote: “Will Big Ed @edchamberlin being sitting next to you in the Mornings #breakfast #newcouple.” (sic)

However, others commented on Sally’s stunning outfit.

Sally’s post comes days after Dan announced that he had decided to depart his presenting role on BBC Breakfast and move to Channel 5.

“In two weeks, I’m going to be leaving BBC Breakfast and moving to 5 News on Channel 5.”

“I’m really excited but I thought I’d just explain the decision,” he added.

He went on: “It’s a massive one for me – someone who loves Breakfast, loves the team there, loves sitting next to Sally.”

“But Channel 5 came along with big ambitions, big plans – and I don’t think opportunities like this come around very often in TV and I can’t wait.

He added on a positive note: “I should also say hopefully it’s not goodbye to the BBC.

“I’ve had the privilege of working with some incredible people on iconic programmes over the years, shows like Football Focus, like Match Of The Day, quiz shows, World Cups, Olympic Games – shows I could only dream of being involved in when I was a kid.

“Hopefully this won’t close the door on that, but also can’t wait to make some big programmes for Channel 5,” he said.

The emotional TV star confessed: “It is going to be weird though – not sitting next to Sally on the sofa in the morning!”

The star had written in a caption next to his video that it had been “a privilege” to enjoy six “happy” years at the BBC.