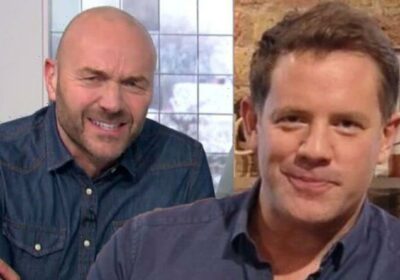 Matt Tebbutt, has presented on BBC’s Saturday Kitchen since the departure of James Martin in 2016. The TV chef has spoken exclusively to Express.co.uk about his career as a TV chef and credits Sunday Brunch’s Simon Rimmer for his successful career in a cheeky snub.

Simon Rimmer was too busy to take the gig!

There has always been a friendly rivalry between Simon and Matt, despite their shows airing on different weekend days.

Express.co.uk asked Matt what he considered to be the big break in his career.

He replied: “I think that would be being offered Market Kitchen which I filmed for quite a few years with Tana Ramsey, Matthew Fort, Tom Parker-Bowles and Rachel Allen.

“It gave me a good grounding in TV and how it all works.

“It was a great experience working with Pat Llewellyn, plus, I got to interview the likes of Gwyneth Paltrow, Chrissie Hynde and Michael Parkinson!

He then cheekily added: “I’m still so grateful that Simon Rimmer was too busy to take the gig… but I think things have worked out for him!”

The pair have always joked about their cheeky rivalry, with Simon adding to this in April last year when chef Ching-He Huang was on the show.

Speaking about the latter’s book, she remarked: “I can’t write this book and not be all in. I would be a bit of a hypocrite if I did that.

“And I was until Matt Tebbutt cooked me his delicious truffle burger on television”, but Simon then intervened as he began booing.

He joked: “Honestly, that Saturday Kitchen lot will do anything to ruin somebody’s life.

“Every single week they do that to people.”

Matt is not worried about criticism, as he was expecting some when he took over on Saturday Kitchen.

He said: “James had a very loyal following, so I’ve been really pleased that so many viewers have stuck with me.

“I pitch up every week and usually forget I’m on live TV, we have so much fun making Saturday Kitchen, it doesn’t really feel like work.

“I hope to see some of the fans at the Ideal Home Show and answer any questions they have.

He continued: “I’m very lucky, I have to say that to do the job I do and work with such a great team is a privilege that I don’t take for granted.”

James presented the cookery series Saturday Kitchen from 2006 until 2016, before leaving the BBC.

He now works for ITV and has presented Saturday Morning with James Martin since 2017.

James has spoken recently about his departure from Saturday Kitchen, admitting he never realised the “impact” he had.

Speaking on the Talkshire Podcast podcast, James confessed: “It just really didn’t really hit me until I left Saturday Kitchen, which is five years ago now, I didn’t realise how big a deal it was and I genuinely mean that.”

The Ideal Home Show, in partnership with NatWest, the world’s longest-running home and interiors exhibition, is currently on at Olympia London until Sunday 27th March 2022. Matt Tebbutt will be on the Eat & Drink stage on Saturday 26th March. For more information and tickets, please visit idealhomeshow.co.uk