After he took up gardening the Prince of Wales confessed he talked to plants and trees to make them grow.

Now I can reveal he has shown an equally eccentric view of the humble stone wall.

He has hailed them as works of art, although for most farmers they are simply a boundary.

At the launch of this month’s London Craft Week, he singled out dry stone walling rather than leatherwork, handbags, glass engravings or lessons on how to sew face masks. 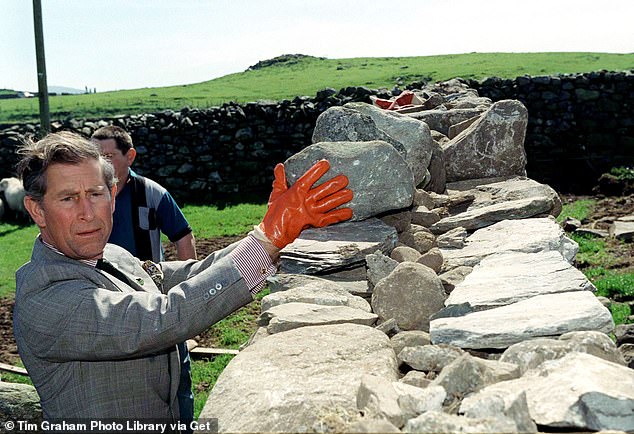 Charles adds that mastery of the craft of dry stone walling requires ‘a sure eye, artistic instinct and much practice’

He is believed to be getting ready to campaign for hedgerows, in the West Country which have fallen into disrepair during the pandemic

‘In my view, a dry stone wall is not only something inherently practical that lasts for generations, but also a form of sculpture,’ says Charles.

Craft aficionados have joked that this interest was perhaps what sent Charles up the wall as he crusades for traditional crafts.

He is believed to be getting ready to campaign for hedgerows, in the West Country which have fallen into disrepair during the pandemic.

Walls have proved controversial for the Royal Family. In The Crown TV drama, a young Prince Philip is shown building a brick wall at Gordonstoun to get over the death of his sister in a plane crash.

However, the school criticised producers for featuring the incident, which they claim never happened.

Charles adds that mastery of the craft of dry stone walling requires ‘a sure eye, artistic instinct and much practice’.

Prince Charles has made plain that he is more than happy to allow others to take the lead when it comes to the practice of stone walling.

‘It’s difficult,’ he acknowledged when invited to lend a hand in completing a wall in the Cotswold town of Northleach.

‘I don’t know what it is but I can never make it fit.’ 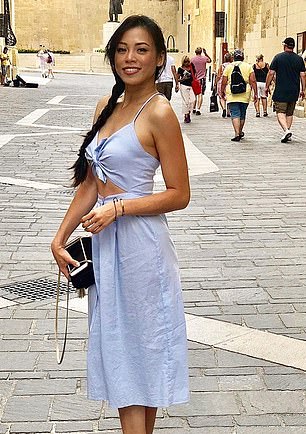 Architect Dara Huang, with whom Edo has a four-year-old son, reveals she has created a £45 luxury bath oil made with lavender, apricot, rosehip and passion flower

Architect Dara Huang, with whom Edo has a four-year-old son, reveals she has created a £45 luxury bath oil made with lavender, apricot, rosehip and passion flower.

‘I’m so proud of this. It smells amazing,’ says Dara, whose office is underneath Edo’s in the same Kensington building.

‘It’s made with energy-infused crystals — amazing in the bath or on your skin.’

Queen of shops Mary Portas has called on businesses to encourage their staff to return to their offices, even though Boris Johnson has advised people to work from home if they can.

The retail guru says employees’ mental health will suffer from being away from colleagues.

‘We are going to see serious issues around well-being and mental health, especially in the younger generation who have to work out of their bedroom with a cup of coffee and a bowl of muesli on their lap,’ she says.

‘That is not a social interaction and that does not grow them. There is a responsibility we have as bosses, even though it is costly.’

She adds: ‘I opened up my offices because I was feeling that my team were getting quite low.’

With her celebrated interior design skills and his acclaimed biographies, they were one of the country’s most fashionable couples, but Rita Konig and Philip Eade have split up, I hear.

‘It’s very sad, but they found that spending lockdown together was the final straw,’ a friend tells me. Konig, 47, is the daughter of another interiors queen, Nina Campbell, while Eade’s books include the bestseller Young Prince Philip.

After Konig married Eade, she expanded her home in London’s Notting Hill into the flat next door.

The race to be BBC chairman is wide open after Charles Moore withdrew his interest.

‘He’s not gonna do it, I am going to put my name forward,’ announces Kelvin MacKenzie, the former Sun editor whose bracing views make Margaret Thatcher’s biographer a lily-livered liberal. ‘I’m very confident I’m going to land the job.

‘I would halve the licence fee, sell Radio 1, 2 and 5Live, then flog BBC One and Two for £400 million. Gary Lineker can go off and eat crisps for a living.’

TV’s Anthea Turner can’t be accused of lacking imagination in her beauty regime.

After being served too much Greek yoghurt for breakfast on holiday in Santorini, she decided to slather the remainder on her face.

‘I remembered [perfumer] Jo Malone telling me that one of the most effective ways to naturally calm, soothe and nourish my skin was to slather live Greek yoghurt on as a face mask for 15 minutes,’ says Anthea.

‘I did this loads of times in Greece and came back with clear, hydrated skin.’ 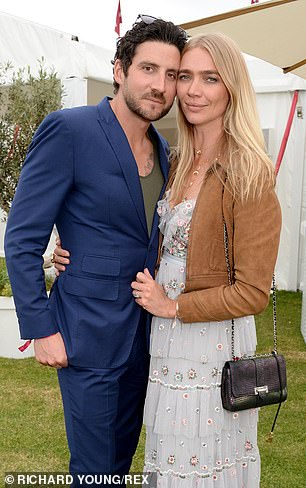 Jodie Kidd has said her battle with anxiety destroyed her catwalk career. Now her boyfriend, former Royal Marine Joseph Bates, is on a mission to break the stigma around mental health after secretly battling demons of his own

Model-turned-publican Jodie Kidd has said her battle with anxiety destroyed her catwalk career.

Now her boyfriend, former Royal Marine Joseph Bates, is on a mission to break the stigma around mental health after secretly battling demons of his own.

‘After watching the amazingly brave Freddie Flintoff talking about his bulimia, I think it’s time to talk about mine,’ says Joseph, 35.

‘I’ve worried what my friends, family, and even partner would say. Since the age of 20, I’ve been depressed to the point of considering ending it all. I’ve abused myself with drugs and alcohol, and after watching Freddie’s documentary about bulimia, I’m pretty sure I have something there too.’

Advocating a practical approach, he adds: ‘I’ve been going to therapy for the past few weeks and it’s the best thing I’ve ever done. It’s truly liberating.’