For I hear the entrepreneur has become engaged to beautiful magician Katherine Mills.

‘The most incredible moment of my life,’ says George of his proposal to Katherine, 37, which took place outside Florence Cathedral in Italy — prompting a thunder of applause from onlookers.

‘I cannot wait to spend the rest of my life with [her],’ he adds. 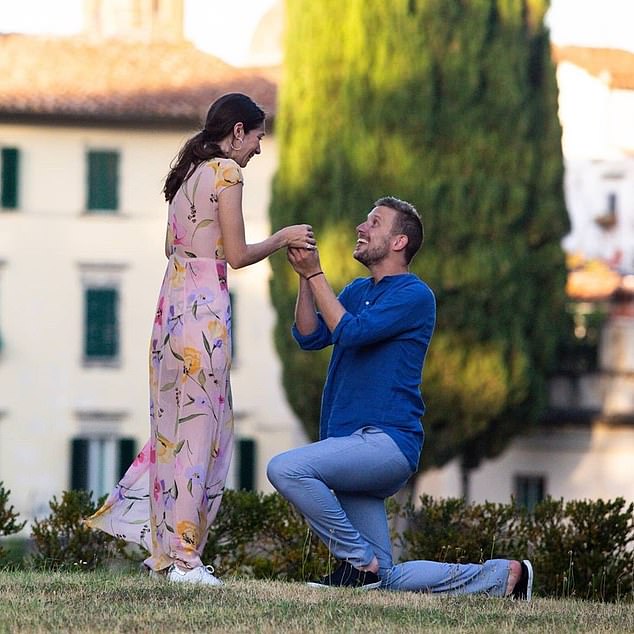 On bended knee: George recreates his proposal to magician Katherine

It is particularly joyous news for the couple, as they both lost their fathers to a fatal heart aneurysm — Katherine when she was 17, and George, seven years ago.

George, 33, who has another brother, Wilfred, 35, recreated the proposal for a picture to share with friends online.

In it, he is on bended knee before his fiancee, who is wearing a pink floral dress.

‘We’re gonna have the most amazing life together, and your Dad Bob would be so, so proud,’ he wrote in a caption, adding playfully: ‘Of everything, but mainly, the achievement to snag this guy.’ 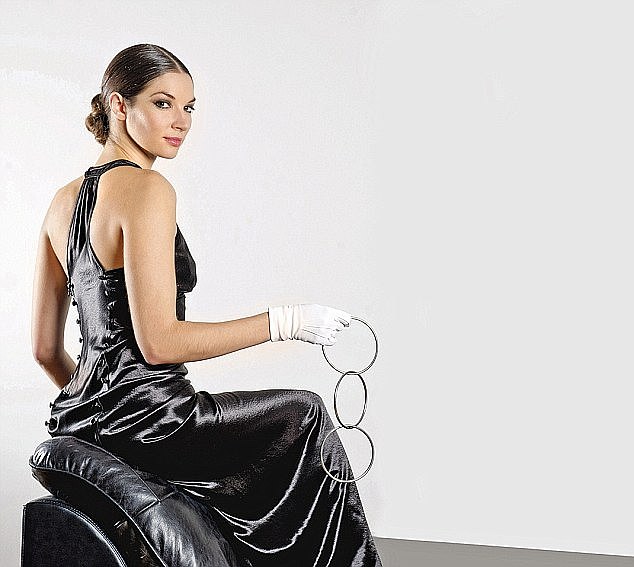 The pair certainly won’t be short of ideas when it comes to drinks and entertainment for their wedding.

George — whose mother is Lady Carina Frost, daughter of the 17th Duke of Norfolk — founded his own rum company, The Duppy Share, in 2014.

On the bottle’s label is inscribed the motto ‘never waste a second’.

Meanwhile, Katherine has made her mark in the magic world as the first female magician to have her own TV show in Britain.

As well as performing her tricks for Boris Johnson at an event last summer, she defied the stereotype that beautiful women are only ever magicians’ assistants by joining The Magic Circle in 2008.

‘I’ve just built a wild swimming pond with my daughter, Leah, and son, Ty,’ the former Strictly contestant tells me.

‘Now I’ve got an old barn which I’m going to convert into a cowboy barn. It will have a kitchen and a fully stocked bar so I can throw wild parties.’

Poldark star shows life on the fringe is a cut above 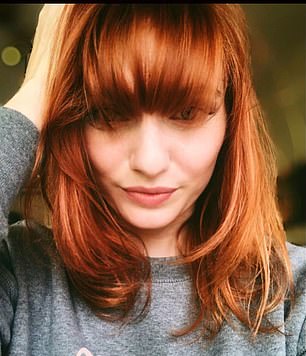 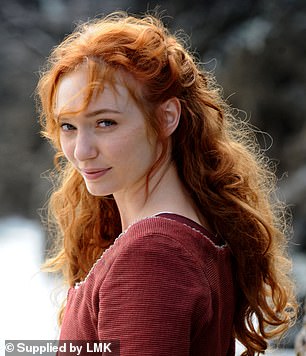 Flame-haired: Eleanor with her new hairstyle (left) and as Demelza on TV (right)

A natural ‘muddy blonde’, Eleanor Tomlinson was so taken with the flowing red locks she had to wear for her role as fiery Demelza in the hit BBC costume drama Poldark that she stuck with the hairstyle off screen as well.

Now, however, the 28-year-old actress has undergone a striking new look with a ‘blunt fringe’ cut at Charles Worthington’s salon in London’s Fitzrovia.

Announcing her makeover to fans online, she declares: ‘The girl’s got new hair.’

Let’s hope her beau, the Coventry rugby ace Will Owen, has noticed.

She plays the Queen Mother in Netflix hit The Crown, but Victoria Hamilton had to resort to some very un-regal measures while working from home during lockdown.

Victoria reveals: ‘I recorded the voiceover for a documentary about Princess Diana under this duvet tent in my bra and knickers, and thinking: “Thank God the director can’t see what I look like right now!”’

The actress, 49, adds: ‘There have been some hilarious emails going around, trying to work out protocols for filming. No more than two actors at once. Make-up done over the phone. No kissing.

‘Someone very clever could make a comedy series — just by filming us trying to film a drama safely.’ 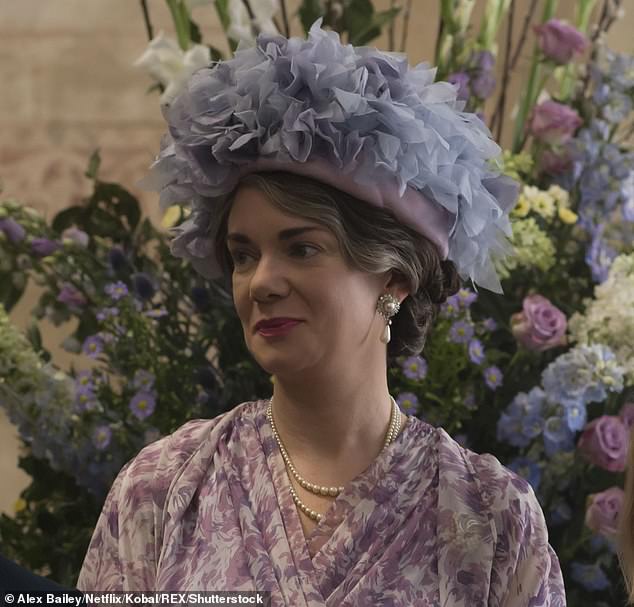 Daisy rings her own Bell

On the first anniversary today of the death of Lord (Tim) Bell, the colourful public relations man who advised Margaret Thatcher, his vivacious daughter Daisy is launching her own PR business, Bellco.

‘Despite all the uncertainty in the world at the moment, it felt like the right time,’ Daisy, 31, tells me.

‘Perhaps people will think I’m mad for taking a risk, but my father always had absolute faith in me, which gave me the inspiration to go with my gut and get on with it.’

Daisy is engaged to Australian banker Andrew Gray, whom she met while in a bar on Bondi Beach, Sydney, with Prince Harry’s ex, Cressida Bonas.

Peter Bowker, award-winning writer of hit BBC dramas World On Fire and Blackpool, recalls attending a meeting with ‘the then Head of BBC Films’, who told him he was a ‘huge fan’ of his work.

Bowker says: ‘He said he’d heard about my tennis playing. I was surprised, as I hadn’t played since I was 16 in Stockport.

‘He then paused and said: “You’re not Peter Moffat [award-winning writer of hit BBC dramas Silk and The Village], are you?”’ 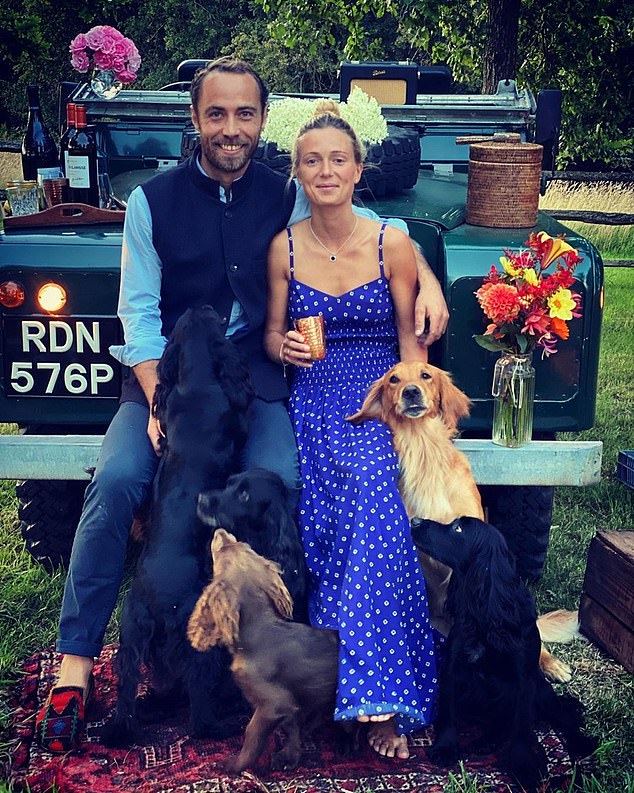 The Duchess of Cambridge’s 33-year-old brother took his French fiancee, Alizee Thevenet, 30, for a picnic in his classic Land Rover.

Forced to postpone his wedding this summer because of the pandemic, James Middleton is determined to show that courting can still be fun in the age of coronavirus.

The Duchess of Cambridge’s 33-year-old brother took his French fiancee, Alizee Thevenet, 30, for a picnic in his classic Land Rover.

‘Alizee and I haven’t been on a date for ages,’ explains James. ‘So I decided to surprise her with a picnic with the dogs and a special little gift.’

The ‘little gift’ was a Bulgari necklace worth £650.

A proportion of each sale is donated to Save the Children’s Covid-19 emergency response appeal.

Catherine Zeta Jones, who memorably once said that £1 million ‘isn’t a lot of money for people like us’, now admits: ‘I’m the Welsh Imelda Marcos.’

The Swansea-born actress, who is married to fellow Hollywood star Michael Douglas, says: ‘I have a very big shoe collection, but my husband thinks mine is a little excessive, especially since some of them have never been worn.’

Fayed feud goes into next round

The blistering temperatures of summer may have abated — but not the High Court war between Camilla Fayed and her younger brother, Omar.

The latter, as I disclosed, claims he was the victim of a ‘violent assault’ initiated by Camilla at the Surrey home of their father, former Harrods owner Mohamed Fayed.

Now, following an application to the court in ‘related proceedings’, Omar has viewed the ‘relevant CCTV footage’ which, he alleges, supports his account that he was the victim of ‘assault and battery’, during which his iPhone was taken.

In her incendiary riposte to Omar’s initial claim, Camilla had alleged that there was ‘no attack’ and that her brother’s ‘general demeanour’ suggested that he was ‘on drugs’.

Omar vehemently denies this, arguing that, if he appeared to be ‘hot or sweating profusely or out of breath’, it was because he had been ‘exercising vigorously’ in the gym.

He will, he adds, rely on ‘the whole of the CCTV footage’ at trial.