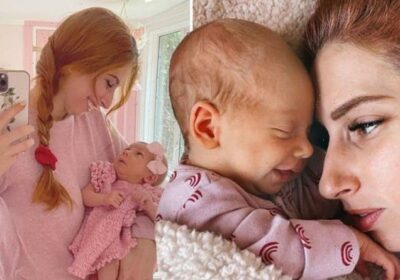 Stacey Solomon and Joe Swash welcomed their second child together on her 32nd birthday back in July. The Loose Women star has since been breastfeeding her newborn and tonight asked if any fellow mums felt as though they “run out of milk in the evening”.

The mother-of-four acknowledged that while her concern may sounded “ridiculous”, she had noticed her breasts felt like “empty balloons” in the evening.

“Rose has a little moment where she seems like she’s cross that she can’t get ant food out,” she wrote.

The television star added she had been drinking and eating more than ever, so didn’t understood why.

“[In] the mornings, I feel like I could feed ten babies but then as they day goes on, it gets less and less.”

Stacey went on to ask if any fellow mums had the same issue.

“Is there anything you can do to get more milk at night? Or is out just in my head and there’s the same amount the whole time?

“Thank you in advance. Love You,” she added.

Stacey shared the post alongside a picture of her baby daughter on her chest.

She followed up her message with some answers from fans as she thanked them for their reassurance.

Many suggested that while her breasts may feel “empty” they were still giving Rose what she needs.

“Lots of you [are] having the same feeling so I thought I’d share some of the responses,” she wrote.

“Thank you for messaging back, it’s honestly so comforting.”

Stacey has been giving fans an insight into the first four months of her daughter’s life on Instagram, where she has 4.8 million followers.

Yesterday, she receieved a flood of comments from fans after sharing a snap of her four children in bed.

The Loose Women star’s sons were all smiles for the camera as her eldest Zachary proudly held onto his little sister.

As part of her caption, she commented: “These are my favourite memories.

“The room in the bed is a little bit smaller these days but our hearts are a whole lot bigger.”

She also has Zachary and her other son Leighton from previous relationships.

The couple were due to get married this year, but postponed their big day due to Stacey’s pregnancy.