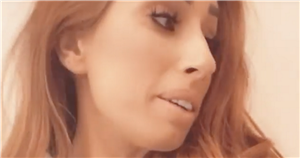 Stacey Solomon has shared an adorable video of her youngest son Rex as he gave himself a hilarious makeover while she got ready for the day.

It all started when the mum-of-three, 31, took to her Instagram stories as she documented her makeup process ahead of a big modelling shoot for In The Style.

The pregnant Loose Women star, who recently revealed she's craving sugar during her fourth pregnancy, shared the funny moment online after her two year old rifled through her makeup bag and decided to follow in his mother’s footsteps.

As Stacey finished applying her nude pink lipstick, in a clip shared on her Instagram story, she panned the camera over to her son who had wiped her stick bronzer all over his cheeks.

Rex looked shocked with the outcome of his hard work after he tried to mimic his mother’s application and saw mess he had made.

The little man looked wide-eyed into the camera before he burst into laughter as he looked at Stacey’s disappointed face dressed in his striped pyjama baby grow.

She captioned the post: “It’s all going well so far …” with a cry laughing emoji which she shared with her 4.5 million followers on Instagram. This comes after Stacey’s photoshoot was cancelled at the last moment on Friday afternoon due to the sudden thunderstorm.

The yummy-mummy, who recently shared her fears that her house is haunted, donned a full face of makeup once again before she ran around the garden trying to tidy her outdoor space as she prepared for the photoshoot.

Due to the last-minute cancellation, Stacey had nowhere else available to shoot her latest clothing range other than her own garden.

The Tap to Tidy influencer informed her fans of her busy afternoon filled with 20 outfit changes for the glamorous shoot but has yet to announce anything official online.

Stacey’s has had overwhelming success with her collaboration with In The Style after she launched her first clothing line with the fashion store on April 2.

Her clothing line reportedly made upwards of £1.5 million in just two weeks after it launched with more than 80 per cent of her line sold. The auburn beauty spent 18 months diligently designing the line which she made sure would cater to people of all different shapes and sizes.

An insider told The Sun in May: “Stacey’s In The Style range has been so well received and it’s selling out.

“In the first 14 days the sales topped £1.5m which is absolutely incredible. Stacey’s popularity is unbridled and the girl-next-door appeal makes her range incredibly popular.

“Everyone is blown away by the result, including Stacey.”