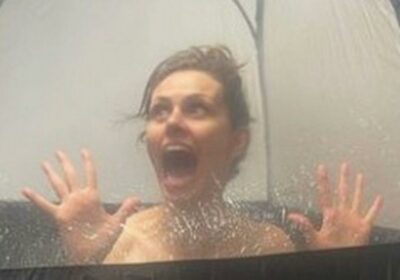 Comedian Ellie, 38, took to her Instagram stories to first share a snap of her pal Jayde, 37, appearing to be completely nude as her bottom half was covered in a black shower curtain.

"Me and @msjaydeadams have known each other for over a decade. What a treat to share this special experience of getting nude, popping on hairnets and getting all our bits spray painted by (lovely) strangers," she wrote over this with a hand emoji.

Jayde, who recently joked that Meghan Markle plagiarised her content, then posted a snap of Ellie behind a similar shower curtain with her hands pressing on the sides and her mouth hanging wide open.

Over this, she said: "10 years I've known this girl," before adding: "Today we stepped over a threshold of friendship, @elliejanetaylor and I stripped off for our spray tans. What a moment".

The two comedians may be good friends away from the Strictly ballroom, but once the dance shoes come on they'll be going head to head in a bid to win the coveted Glitterball trophy with their respected professional partners.

Jayde was the fifth person to be announced as a contestant on the show as she shared her excitement by saying: "Since I watched the first series in 2004, I feel like every step I’ve taken in my career over the last 11 years was to be on Strictly.

"I cannot begin to express the emotions I am feeling, this means so much to me and my family. I’ve always watched it, apart from a brief hiatus in 2011 as I was relentlessly gigging every weekend (to try and get on Strictly)."

"I’ve been a massive fan of the show for years. I feel like I’m watching myself in a dream and I can’t believe I’ve manifested this. Holding this in has been torture for me!” she added.

A few days later, Ellie was announced as the ninth contestant in the line-up. Speaking to Ranvir Singh at the time, Ellie admitted that her mum started crying when she told her the exciting news.

She also shared that she's not the best dancer, but one of the routines she'd love to perform is the jive.

While Ellie isn't the most confidence dancer, the star said she's "over the moon" to be taking part in the show.