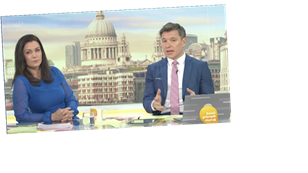 Want the most up-to-date celebrity exclusives sent straight to your inbox every day? Sign up now and join the club!

Susanna Reid and Ben Shephard have issued an apology to Patsy Palmer after she stormed off Good Morning Britain on Wednesday 17 March.

The EastEnders star had come onto the show to talk about her her wellness brand after changing her lifestyle in Malibu, California, but was left furious after reading the description at the bottom of the screen, which stated: "Patsy Palmer: Addict to Wellness Guru".

Clearly unimpressed, the 48 year old told the hosts she would "do a Piers Morgan" and leave as it's "not okay" to write that.

After the TV personality switched off her screen and ended the interview, 46 year old Ben launched into a speech to apologise for the mishap.

"The most important thing is that our intention was never to upset Patsy Palmer," he told viewers.

The presenter continued: "We were very keen to talk to her about what she wanted to come on.

"Patsy has talked in the past, she's talked in her book, particularly about her addiction, her stint in rehab and now she has a wellness brand.

"She's promoting that. It's the journey she's been on to get to where she is today to what she's learned in her life."

He added that they had clearly "mistakenly misread" that detail as Susanna jumped in to insist: "Yes, it was not intended as an ambush."

Ben, who has been tipped to permanently replace Piers Morgan on the show, continued: "Not for a minute. So we do apologise Patsy.

"And clearly she was very upset by that and that was certainly not how we like to do things."

Susanna added: "No, and I was really keen to talk to her. She's a lovely person and she's got a lot to talk about.

"And she has been very open but you know, of course, it's everybody's right not to be on this programme if they don't want to be, as we know."

Patsy has previously been open about her battle with addiction. She also wrote in her autobiography, titled All Of Me: "By my 20s I was bingeing my life away on cocaine, ecstasy, and enough vodka and Laurent Perrier Champagne to quench a small village’s thirst for several hours.

"I would be out of my head for two or three days in a row – whole chunks of time were lost.

"I took so many drugs I’m amazed I survived." The star managed to get sober in 2004.