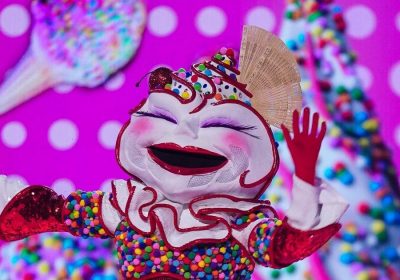 After The Masked Dancer kicked off on Saturday, fans think they have cracked the code on Knickerbocker Glory's identity.

Viewers of the show have taken to Twitter to share their opinions and believe the character is none other than Strictly Come Dancing judge Craig Revel-Horwood.

Fans quickly pointed all signs to the dancer as they stated that he once won a cooking contest with a jellied prawn cocktail. One Twitter user went one step further and found a page in Craig's autobiography with him posing with the dish in question.

The caption in the book read: "In training for Celebrity Masterchef, winning the Sunbeam Junior Chef of the Year competition with my very own Jellied Prawn Cocktail."

The quirky character was introduced along with the other stars on the first episode, where he or she performed Telephone by Lady Gaga.

Knickerbocker Glory explained: "I'm so excited I could.. scream.

"Just like a Knickerbocker Glory I'm full of layers, from my tippy-toes to the cherry on top.

"I'm here to entertain the nation. I want to squeeze a little zest into the competition."

The latest character who was unveiled on Monday night's episode was Dita Von Teese as Beetroot.

The 48 year old kept judges Jonathan Ross, Mo Gilligan, Oti Mabuse and Davina McCall on their toes as none of them guessed correctly on 31 May.

As the four chanted "take it off!" the slender figure unmasked themselves to reveal they are American star Dita.

The panel screamed "oh my god!" as they couldn't believe they missed the clues about 60s styling and vintage dances she performed on stage.

Oti, 30, asked her: "Have you done any dance training?" to which Dita responded: "Yeah, I always say I was a failed ballerina. I wanted to be a ballerina more than anything in the world.

"My ballet teachers were like, 'Oh your arms and legs are great!' but I can't follow choreography."

Jonathan, 60, then chimed in to gush over how "elegant" she was during her performance as the rest lamented over how the "layers" clue was in relation to her career.