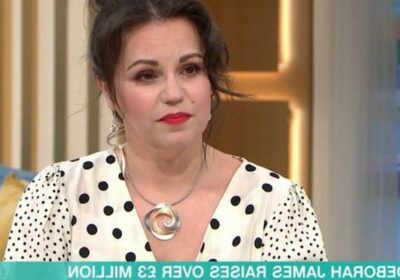 This Morning's Dr Philippa Kaye was reduced to tears as she opened up about her friend Deborah James's announcement that she has made the decision to enter end of life care amid cancer battle.

Dr Philippa, 41, has herself battered bowel cancer after she was diagnosed back in 2019 and she had an emotional chat about cancer with the ITV show's hosts Phil Schofield and Rochelle Humes who is filling in for Holly Willoughby.

The ITV GP's friend and BBC podcaster Deborah James, 40, was diagnosed with bowel cancer in 2016 and she has been candid in sharing her journey and decision to enter end of life care after living with stage four cancer for five years.

Speaking on This Morning, a teary-eyed Dr Philippa said: “The cancer community is an amazing place, and you guys have to excuse me if I do get emotional, and Deborah is an amazing person.

"You have a bond in a way other people don't. We bonded over being in ICU, or being in hospital on our own in the middle of a pandemic, and you have a mutual understanding.

"That's messaging at 11 o'clock at night or 3 in the morning. That connection is immense."

The TV GP has called herself lucky for catching her cancer early and despite having battled the illness she is now cancer free.

Using her platform on This Morning, Dr Philippa shared cancer symptoms to look out for including unexplained weight loss, blood in faeces, irregular bowel movements or persistent stomach pains for more than three weeks.

Prior to her cancer diagnosis Dr Philippa had been told at an initial consultation that she had a one in 10,000 chance of having cancer but she has shared early signs and symptoms of cancer for others to be educated on catching the illness early.

Deborah James, who has raised more than £3.6million for her fund Bowelbabe, has opened up about her cancer battle as she nears the end of her life.

Taking to her Instagram earlier this week, where she has over half a million followers, she wrote: "The message I never wanted to write. We have tried everything, but my body simply isn’t playing ball. My active care has stopped and I am now moved to hospice at home care, with my incredible family all around me and the focus is on making sure I’m not in pain and spending time with them.

"Nobody knows how long I’ve got left but I’m not able to walk, I’m sleeping most of the days, and most things I took for granted are pipe dreams. I know we have left no stone unturned. But even with all the innovative cancer drugs in the world or some magic new breakthrough, my body just can’t continue anymore.

"In over 5 years of writing about how I thought it would be my final Christmas, how I wouldn’t see my 40th birthday nor see my kids go to secondary school – I never envisaged writing the one where I would actually say goodbye.

"I think it’s been the rebellious hope in me. But I don’t think anyone can say the last 6 months has exactly been kind! It’s all heartbreaking to be going through but I’m surrounded by so much love that if anything can help me through I hope that will."

The mother of two broke down in tears on BBC Breakfast yesterday as she spoke about the 'hard conversations' she has had with her children about her end of life care.

Download OK! magazine's FREE app and get all the latest gossip straight to your phone

She said: "I've always said I don't want to leave any stone unturned – I don't think there isn't a stone we haven't tried to unturn to make my liver work again in order to get my body functioning.

"Unfortunately I'm exhausted – I'm absolutely exhausted. We've got to the point now where I can't really do anything more. "

She continued as she began to break down in tears: "I have a really loving family who I adore. Honestly, they're incredible and all I knew I wanted was to come here and be able to relax knowing that everything was okay.

"I've had some really hard conversations during the last week. You think, 'Gosh, how can anyone have those conversations?' and then you find yourself in the middle of them. And people are very nice, but you're talking about your own death and I've had five years to prepare for my death."

For all your updates on Deborah James, sign up to our daily OK! newsletter.