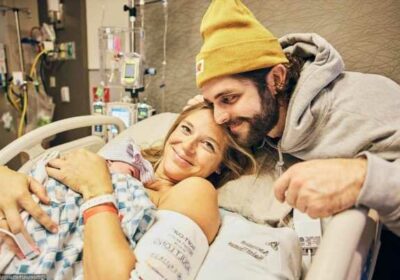 The ‘Look What God Gave Her’ singer gushes about witnessing a ‘miracle’ when his daughter was born, while his wife reveals the inspiration behind their baby’s name.

AceShowbiz –Thomas Rhett is back on diaper duty again, more than a year after welcoming his first daughter Ada. The country music star and his wife Lauren Akins announced that they have welcomed their fourth daughter, a baby girl.

Through a post on their respective social media pages, both the happy parents revealed that their daughter, named Lillie Carolina Akins, was born on November 15. The 31-year-old singer shared the news on Wednesday, November 17 along with a picture of him with his wife who was cradling the newborn while lying in a hospital bed.

In the caption, the “Remember You Young” hitmaker gushed about witnessing a “miracle” when his child was born and praised his wife as a “hero.” He wrote, “Lillie Carolina Akins born November 15th. 7.5 pounds of pure joy @laur_akins you are my hero. Watching a child being born is legit a miracle. 4 under 6 here we go!”

Lauren, meanwhile, posted a picture of her kissing the little girl. “Our little miss Lillie Carolina Akins was born on November 15th and our family couldn’t be more over the moon about our littlest joy,” she captioned the snap.

Lauren then shared lyrics from a song inspired by Bible scriptures that apparently inspired the name they chose for their newborn daughter. ” ‘If He dresses the lilies with beauty and splendor/ How much more will He clothe you?/ If He watched over every sparrow/ How much more does He love you?’ lyrics from ‘Jireh’ by @elevationworship and @maverickcitymusic inspired by scriptures in Matthew 6 & Luke 12. Just love hearing her name as the sweetest reminder of how much God cares for us,” she divulged.

Thomas and Lauren, who celebrated their ninth wedding anniversary on October 12, became parents in May 2017 when they adopted Willa, then 18 months old, from Uganda. The podcast host was pregnant at the time and gave birth to a daughter, Ada, three months later. Their third child, another baby girl named Lennon, was born in February 2020.

Thomas announced they were expecting their fourth child on Mother’s Day. “Well… we are pregnant again!” he wrote on Instagram, excitedly adding, “We are pumped to be having our 4th girl.”