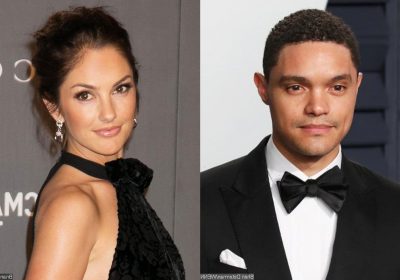 After being reported to have rekindled their romantic relationship, ‘The Daily Show’ host and the ‘Titans’ actress are said to have spent ‘a lot of time’ and had ‘vacation together.’

AceShowbiz –Trevor Noah and Minka Kelly are reported to have officially gotten back together. After allegedly calling an end to their romantic relationship less than a month ago, “The Daily Show” host and the “Titans” actress were said to realize that they were “happier being together than apart.”

“Minka and Trevor have been on-and-off,” a source told Us Weekly. The source went on to spill about their current relationship status, saying, “Now they’re back together. They realized they’re both happier being together than apart.” Adding further, the insider revealed to the publication, “They already went on vacation together and are spending a lot of time together.”

The insider went on to claim that “they’re working on their relationship while just enjoying each other’s company.” As the 37-year-old host has rekindled his romance back with the “Friday Night Lights” alum, the inside source noted, “It’s not like they’re rushing down the aisle any time soon.”

A separate source confirmed to ET about the alleged reunion, saying, “Trevor and Minka are taking things day by day.” The source continued, “They’re spending more time together and are both happy.” Offering more details, the insider went on to explain, “Their feelings for each other never really went away and after taking some space, they realized they missed each other.”

The reconciliation news came less than a month after a source announced via ET that Trevor and Minka had parted ways. “Minka and Trevor have broken up. Their work commitments and careers are very different and they both felt like they should take time apart,” the insider reported.

However, a little over a week after the two were said to have called it quits, they were spotted getting “cuddly” and “kissing” while dining at French-Japanese fusion restaurant Orega in St. Barts. According to the source, they departed together by a private plane the next day. At the time, a source revealed that the two are “not officially back together,” but are “figuring things out.”