TV BAFTAs 2020: Stacey Dooley looks thrilled to be out as she arrives at the socially-distanced awards in a strapless black velvet fishtail gown

Stacey Dooley arrived for TV BAFTA presenting duties at Television Centre on Friday evening, looking thrilled to be out and about.

The broadcaster, 33, stepped out of a black car grinning from ear-to-ear as she was dropped off, making quite an entrance in a stunning black ball gown. 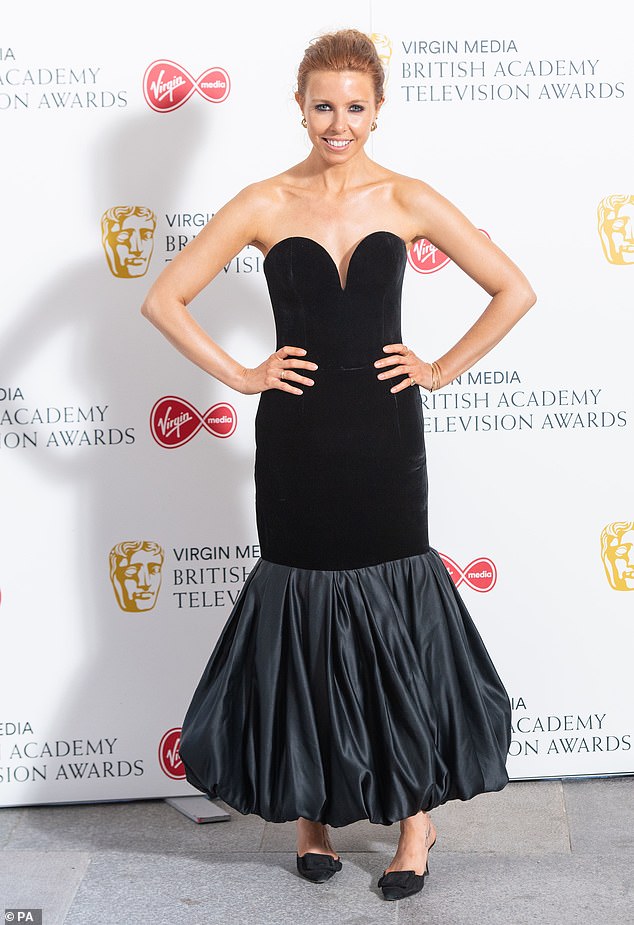 Thrilled: Stacey Dooley, 33, arrived for TV BAFTA presenting duties at Television Centre on Friday evening, looking thrilled to be out and about

It featured a fishtail detailing at the hem in a satin finish.

She added black pumps to the look and silver swirl earrings to complete the semble.

Stacey looked flawless with her bronzed complexion and thick sweep of mascara.

She whipped her russet locks up from her features in a chic bun. 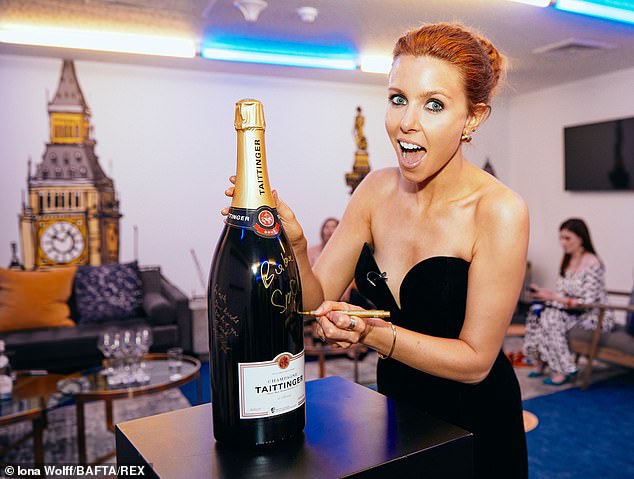 Star signing: The former Strictly Come Dancing winner pulled a shocked face as she signed her name onto the Taittinger Methuzelah while backstage at the event 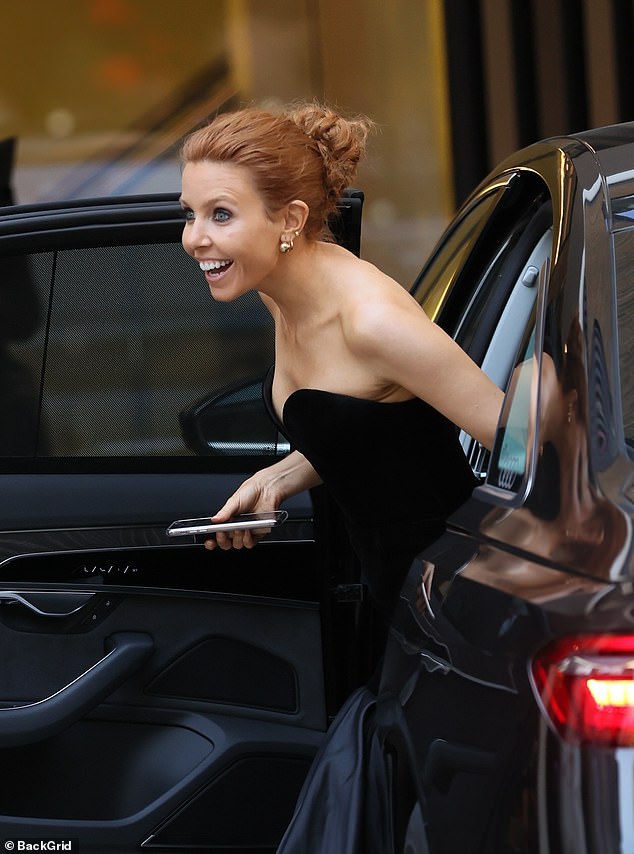 Arrival: The broadcaster stepped out of a black car grinning from ear-to-ear as she was dropped off, making quite an entrance in a stunning black ball gown 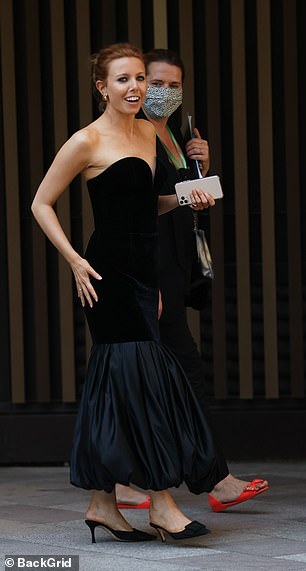 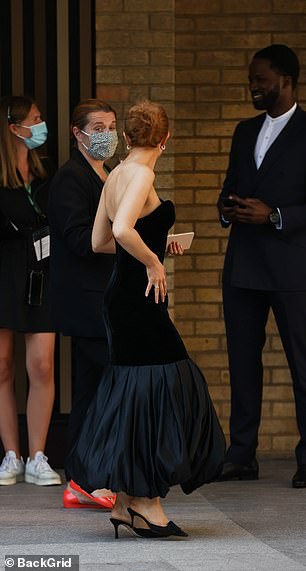 In she goes: She was seen being accompanied into the building with a masked chaperone 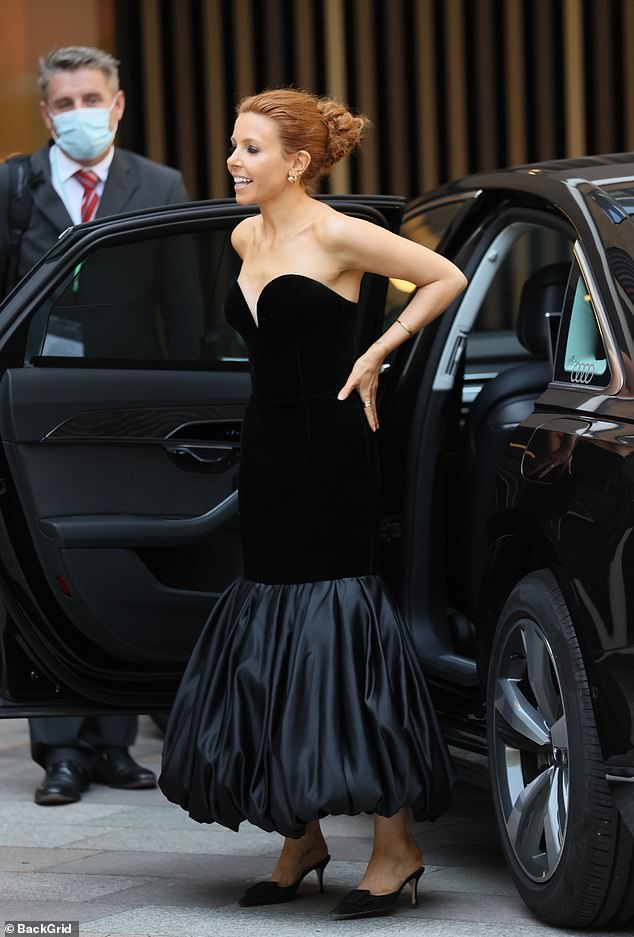 The BAFTA Virgin Media British Academy Television Awards are being held in a closed studio after the original date was postponed due to the coronavirus outbreak.

The BAFTA Television Craft Awards and Virgin Media British Academy Television Awards were originally scheduled for 26 April and 17 May.

Organisers confirmed at the time that following government advice they had opted to reschedule the ceremonies until later in the year.

The awards show is being held in a BBC studio and in accordance with government guidelines the ceremony will be socially distanced, with nominees accepting their prizes virtually.

Making his debut as host of the all-star ceremony, actor and comedian Richard Ayoade will steer audiences through this years’ nominations, with nominees invited to get involved through video link-ups. 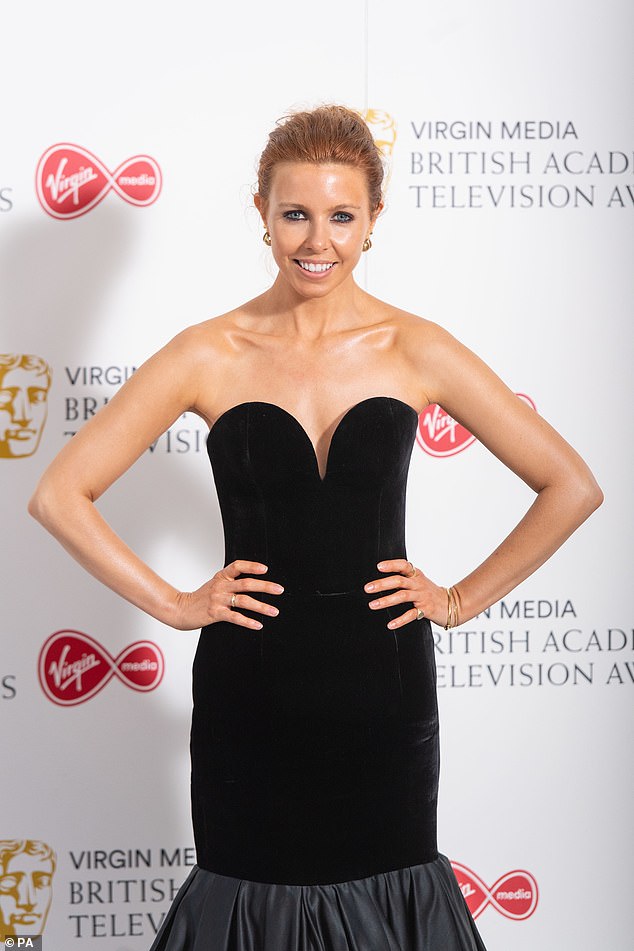 Svelte: Stacey looked flawless with her bronzed complexion and thick sweep of mascara 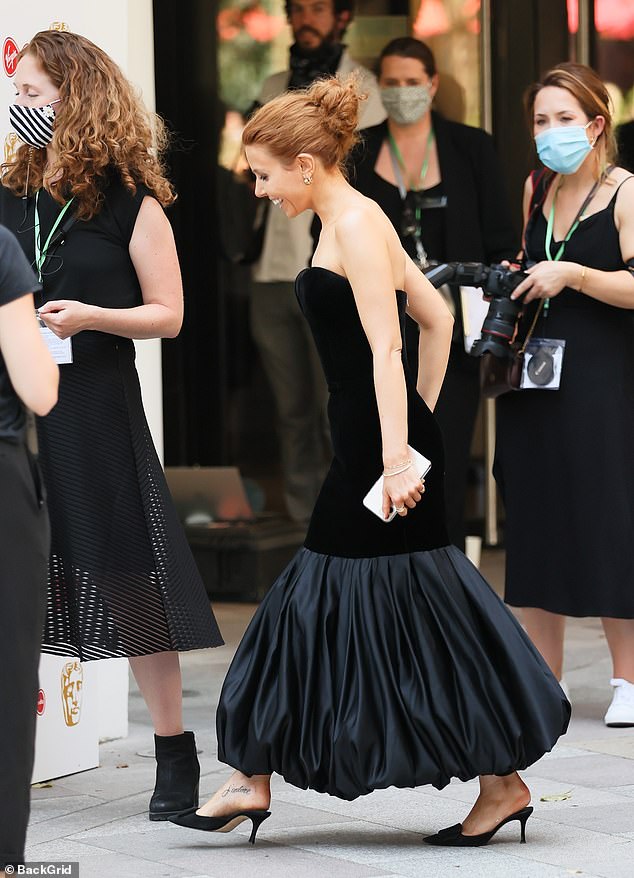 Stylish: She whipped her russet locks up from her features in a chic bun 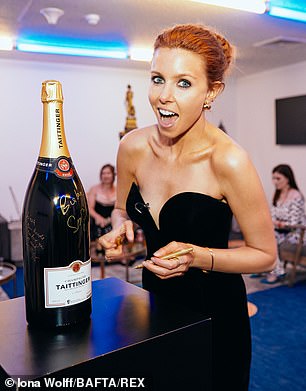 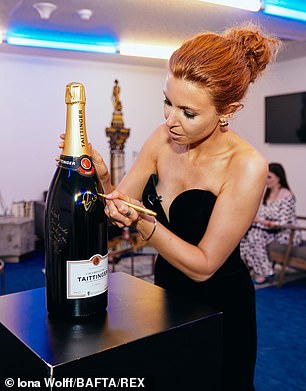 Getting involved: Stacey signed the Taittinger Methuzelah backstage at the BAFTAs 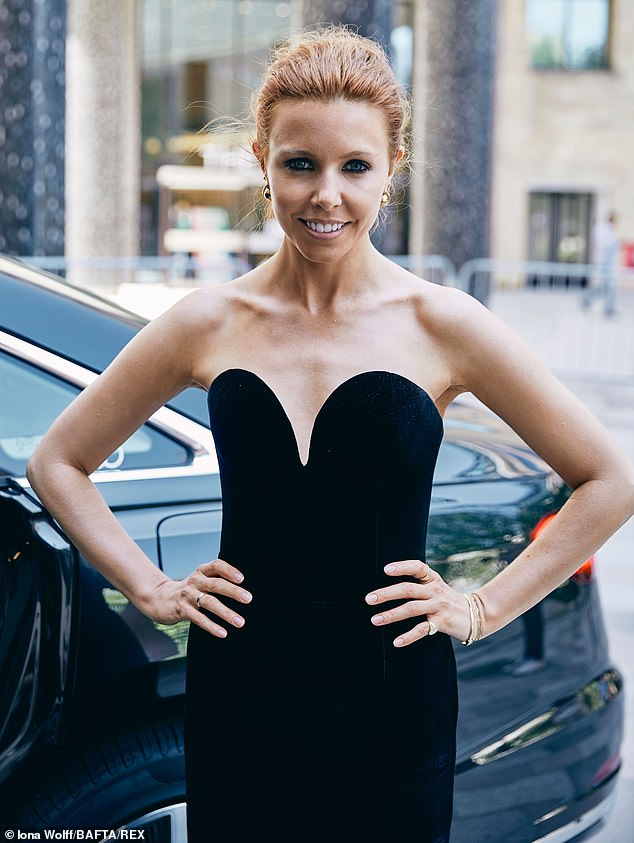 Signature pose? Stacey stood with her hands on her hips as she stopped for a quick photo

Richard, who has himself won a BAFTA, previously joked about hosting the socially distanced programme: ‘I am as surprised as you are that this is still going ahead.’

Host Richard will also be joined virtually by some big names in television including Billy Porter, Chris O’Dowd, David Tennant, Jeff Goldblum, Kermit the Frog, Miss Piggy, Michael Sheen and Ruth Madeley, who will be presenting awards via video link.

Audiences will also be treated to two performances from internationally-acclaimed comedian, musician, actor and writer Tim Minchin, including an original song composed specially for the event.

While the BAFTA Television Awards is typically a glitzy affair, winners will accept their awards from home, while presenters will appear live in the studio. 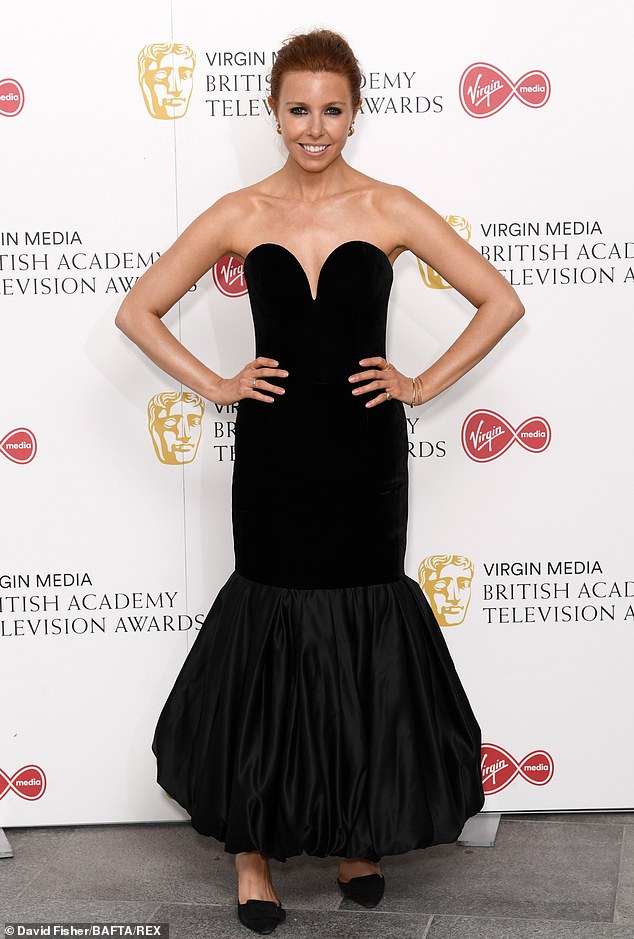 Chic: The look was rounded off with silver swirl earrings 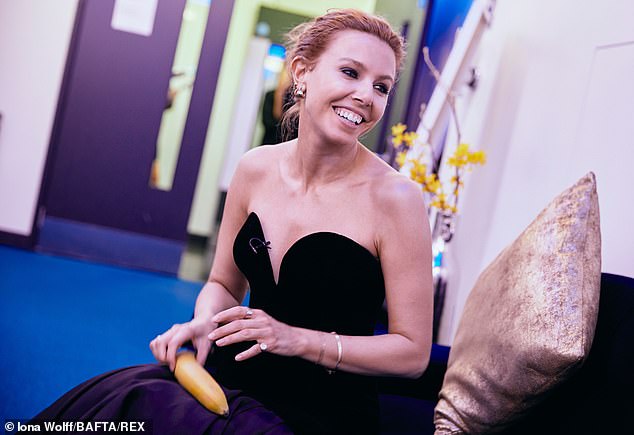 Snack time: Stacey opted for a banana for her backstage snack of choice 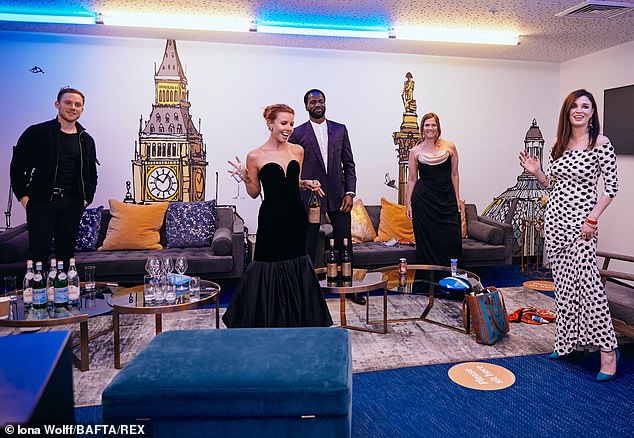 Earlier this month the full list of nominations for the BAFTA Television Awards 2020 were announced.

Chernobyl, Fleabag, The Crown, Giri/Haji and The Virtues all lead the way with three nominations each.

Actors Jared Harris and Stellan Skarsgard have been recognised in the Leading Actor and Supporting Actor categories. 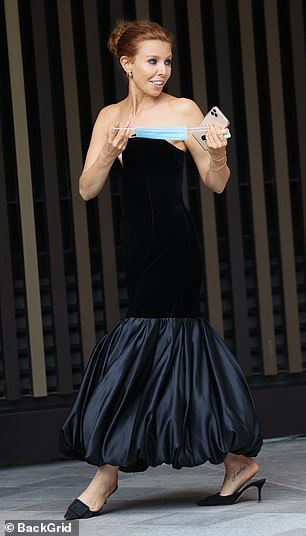 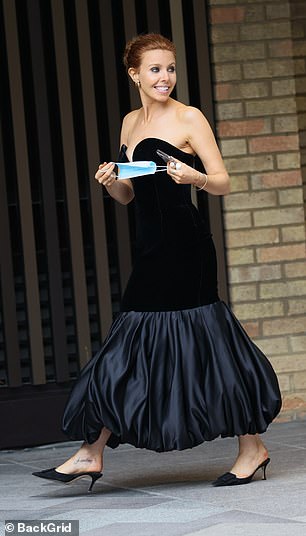 Making her exit! Before the clock had struck 7pm, Stacey made her exit from the BAFTAs 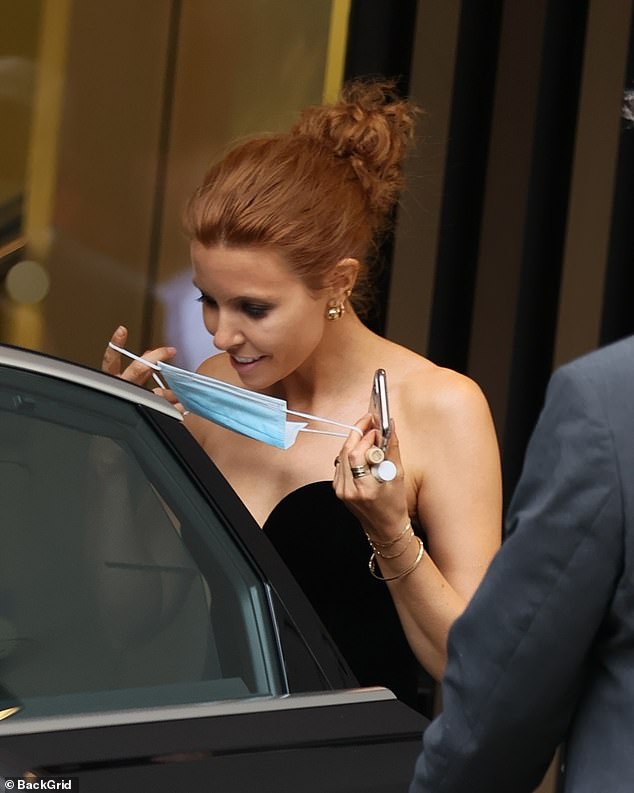 Masking up: As she climbed into her chauffeur driven car, the presenter put on a surgical mask

Channel 4 drama The Virtues, starring Line of Duty’s Stephen Graham has picked up nominations in the Leading Actor, Mini-Series and Supporting Actress (for Helen Behan) categories.

Sex Education picked up a nod in the Breakthrough Talent for Male Performance in a Comedy Programme (for Ncuti Gatwa).

Rounding off the top nominees, Top Boy, which was revived in 2019, has scored a nod for Supporting Actress (for Jasmine Jobson) categories.

Tune in to the Virgin Media BAFTAs on Friday 31 July from 19.00 BST on BBC One

The Hunt For Jihadi John

Lee Mack for Would I Lie To You

Our Dementia Choir with Vicky McClure

The Misadventures of Romesh Ranganathan – WINNER

Joe Lycett’s Got Your Back

When They See Us – WINNER

Stephen Graham for The Virtues

Callum Turner for The Capture

Samantha Morton for I Am Kirsty

Victoria Derbyshire: Men who lost loved ones to knife crime

Race Across The World – WINNER

David Harewood: Psychosis and Me

The Left Behind – WINNER

8 Days: To The Moon and Back

Joe Absolom for A Confession

Josh O’Connor for The Crown

Will Sharpe for Giri/Haji – WINNER

Helen Behan for The Virtues

Helena Bonham Carter for The Crown

Naomi Ackie for The End of the F***ing World – WINNER

Aisling Bea (Writer) for This Way Up

Caroline McCall for His Dark Materials

Michele Clapton for Game of Thrones

Arthur Cary for The Last Survivors

Shane Meadows for The Virtues

Bridget Caldwell for The Royal British Legion’s Festival of Remembrance

Andy R. Worboys for Untouchable: The Rise and Fall of Harvey Weinstein

Kim Horton for 63 Up

Inma Azorin for The Trial of Christine Keeler

Kirstin Chalmers for Catherine The Great

Andrew Phillips for War In The Blood

PHOTOGRAPHY: FACTUAL sponsored by The Farm

PATRICK SMITH, NEIL HARVEY for Untouchable: The Rise and Fall of Harvey Weinstein

Adriano Goldman for The Crown

Suzie Lavelle for His Dark Materials

SOUND TEAM for Battle of the Brass Bands

SOUND TEAM for The Crown

Alex Maclean for The Durrells

Elastic for Catherine the Great

Charlie Covell for The End of the F***ing World