Vanessa and Nick Lachey secretly looked through each other's phones 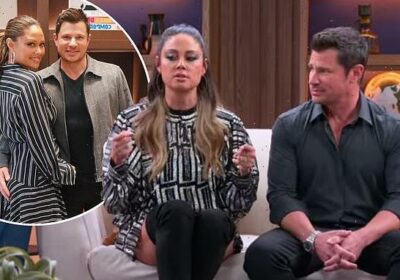 ‘I need to trust this man’: Vanessa Lachey reveals she and her husband Nick secretly looked at each other’s phones before going to therapy

Vanessa Lachey has revealed she and her husband Nick used to look through other’s phones until a therapist told them they ‘shouldn’t be together’ if they didn’t trust each other.

The TV host, 41, admitted that she and her singer husband, 48, used to secretly go through each other’s phones – unbeknown to their partner.

Speaking on the reunion episode of reality TV show The Ultimatum: Marry or Move On, she said she had ‘mixed feelings’ about contestant April going through her boyfriend Jake’s phone when he was asleep. 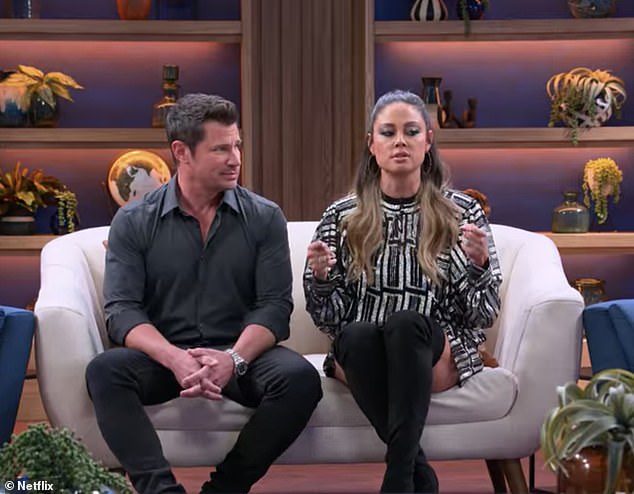 Difficulties: Vanessa Lachey has revealed that she and her husband Nick used to look through other’s phones – unbeknown to their partner

But Vanessa, who co-hosts the series with Nick, admitted she has done it herself in the past, but was quick to add that it is not something she would think about doing anymore.

Speaking about April’s decision, she said: ‘You being The Ultimatum detective April decided to go through Jake’s phone when he was sleeping.

‘So I’ve got mixed feelings about that, I know there was a time in my life when I did it.’

A surprised Nick stammered: ‘You wait what?’ 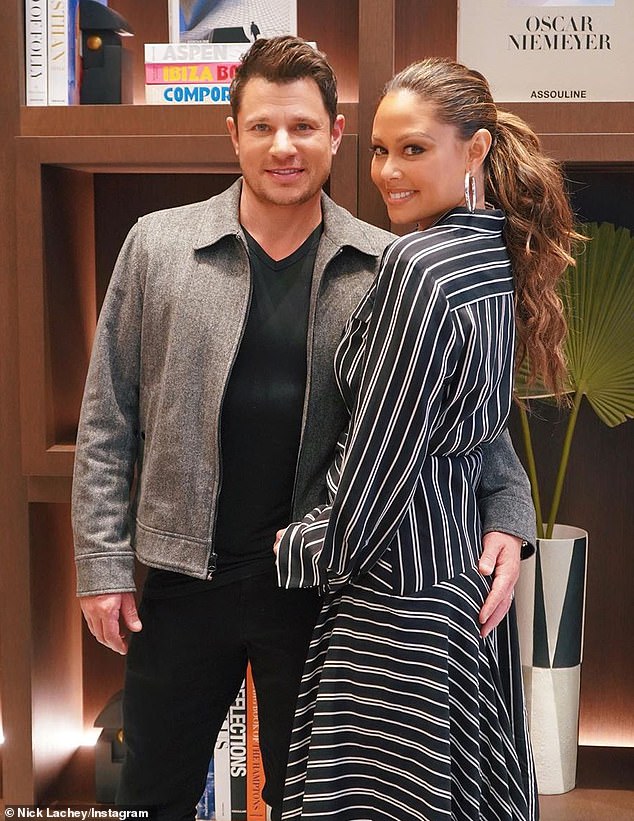 Never again: The TV host, 41, said they put an end to the practice when they went to a therapist and were told that they ‘shouldn’t be together’ if they didn’t trust each other

But Vanessa hit back and said that he had done the same thing to her, quipping that she was ‘surprised’ that he guessed her tricky password.

She added: ‘You did it too! I’m actually really surprised you figured out my password that was a good one.’

The actress said they put an end to the practice when they went to a therapist and were told that they ‘shouldn’t be together’ if they didn’t trust each other.

‘I remember we went to a therapist and she was like “if y’all are going through each other’s phones then you shouldn’t be together”,’ she said.

‘I was like “you’re right, I need to trust this man and he needs to trust me”.’ 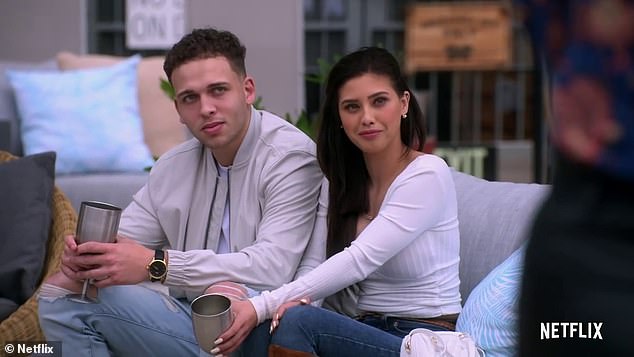 Trust: Speaking on The Ultimatum, she said she had ‘mixed feelings’ about contestant April going through her boyfriend Jake’s phone (both pictured) when he was asleep

It is not the first candid revelation Vanessa has made about her and Nick’s relationship while they co-hosted The Ultimatum.

In previous episodes, she revealed she and Nick only realized they wanted to get married after they broke up and dated other people.

The mother-of-three admitted she and her husband decided to temporarily part ways as she opened up about the past difficulties in their relationship.

Speaking to contestants on The Ultimatum, Vanessa said she thought she would ‘never give a man an ultimatum’ but ended up doing just that five years into their relationship, because she wanted to get married and have children.

She explained: ‘We dated for five years. So I finally said, “What are we doing?” I had moved in with him, I had renovated his entire bachelor pad, there was a bar in the pool, I was like ‘whatever you want’, and now I’m like, “OK I want to put kids in the pool.” 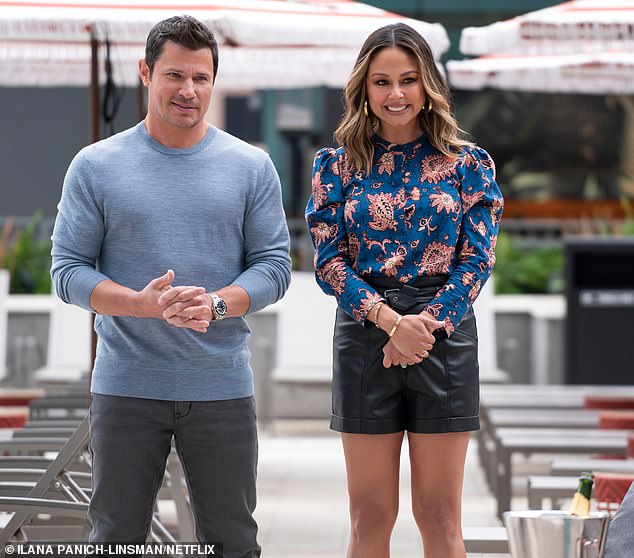 Trials: It is not the first candid revelation Vanessa has made about her and Nick’s relationship while they co-hosted The Ultimatum, previously saying they had a brief break-up

‘So that’s when I started doing the dance [waves her ring finger in the air].’

Vanessa admitted she and Nick broke up before eventually deciding they wanted to get married, saying it took them dating other people to realize their commitment to each other.

She continued: ‘If I’m being completely candid and transparent, we took a break. We both saw one other person and we realized that if we got out of our own way, we could be amazing together.

‘But it took me seeing somebody else and me realizing I don’t mind the things that bugged me or were holding me back.

‘I don’t mind all that, the bigger picture is how I feel about that person and their values of wanting to be with me and knowing everything about me.’ 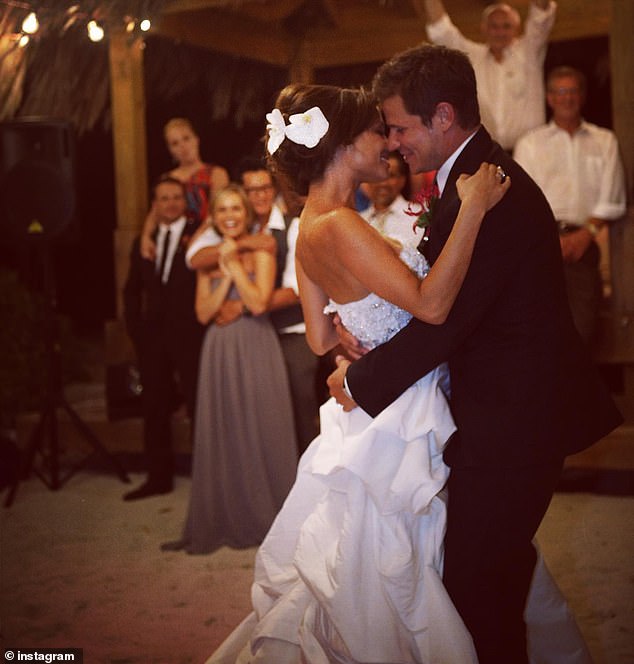 Marriage: The couple, who have three children together, tied the knot on Richard Branson’s Necker Island in 2011, five years after they started dating 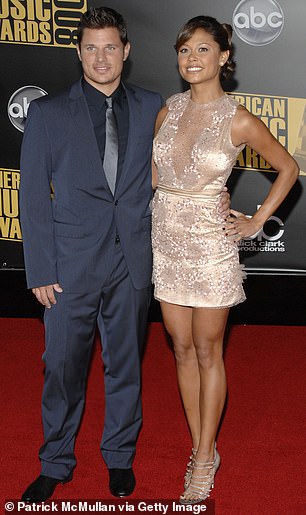 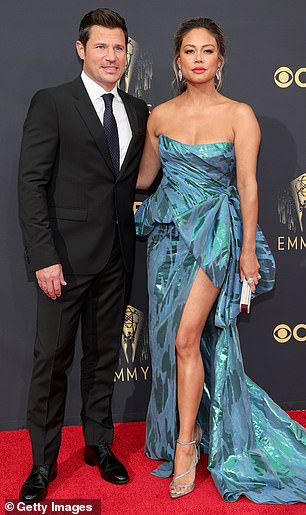 Trials: She admitted that she and Nick, 48, decided to break up after five years of dating after she said she wanted to get married. They are pictured left in 2008 and right in 2021

‘I think we got perspective,’ Nick added.

Nick and Vanessa met when they co-starred in his 2006 music video What’s Left Of Me, shortly after his split from Jessica Simpson.

Elsewhere on the reality TV show, Vanessa shared her thoughts on how her husband Nick’s much-publicized marriage and divorce from Jessica impacted their early relationship. 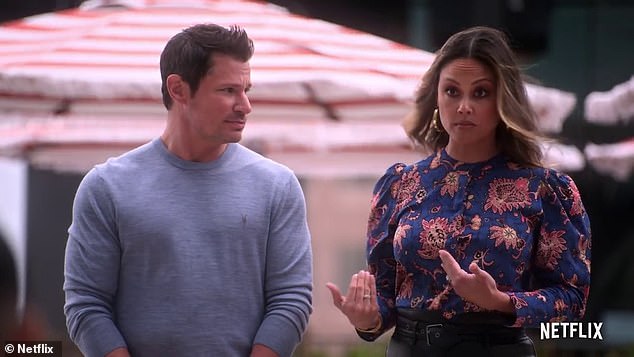 Romance: Vanessa said she thought she would ‘never give a man an ultimatum’ but ended up doing just that five years into their romance

Nick and Jessica, 41, who were married from 2002 to 2006, became tabloid fixtures when they co-starred in the MTV reality show Newlyweds and their subsequent separation earned worldwide media coverage.

Vanessa said that she had to experience Nick’s ‘very public divorce’ and were only able to ‘commit’ to their own relationship when they ‘let it go’.

‘He was literally in a very public marriage and a very public divorce, and I had to go through all that s**t very publicly and it was very hard for us,’ Vanessa told the contestants on the sixth episode of The Ultimatum. 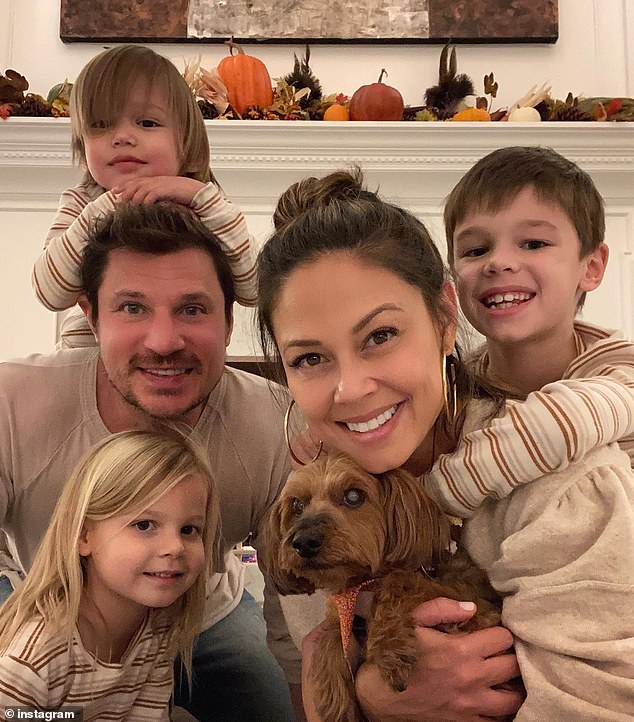 Children: The couple have now been married for more than a decade and they share three kids: sons Phoenix, five, and Camden, nine, and daughter Brooklyn, seven

Nick and Vanessa’s candid confession about their relationship hurdles comes just days after the former 98 Degrees singer was caught on camera accosting a celebrity photographer – who exclusively told DailyMail.com that she feared he was going to ‘knock her out’ during his foul-mouthed rant.

The ex-popstar was was caught on video losing his temper with Jody Santos, going off on a foul-mouth rant, and attempting to snatch her phone from her car, after he was spotted having dinner with Vanessa last month.

In video shared on social media, the Love is Blind host can be seen approaching the woman and calling her a ‘p***y mother f***er,’ before reaching into her vehicle.

Jody, a veteran paparazzo, told DailyMail.com in an exclusive interview that she is still reeling from the Oscar-night incident.

‘I’m still shaken up over this. I truly thought Nick was going to bust his fist through my car window,’ she said. 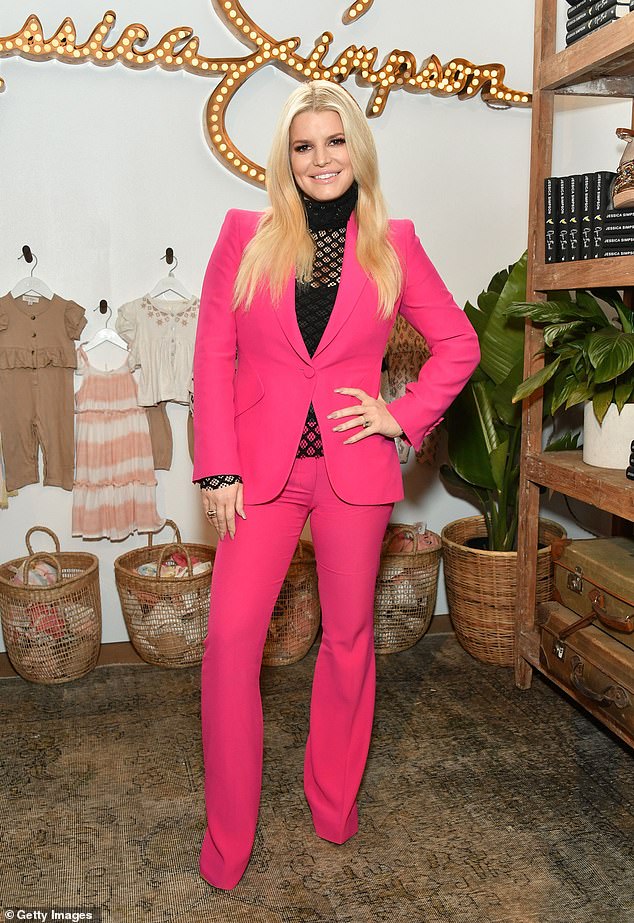 ‘In all my years of photographing celebrities, no one has ever tried to hit me. I am just relieved that I rolled up my window as fast as I did, otherwise he would have knocked me out. No doubt about it.’

Jody, who has been in the paparazzi business for 18 years, said driving around celebrity hot spots at night and snapping pics of stars leaving fancy restaurants is common practice in her profession.

While driving through Beverly Hills Sunday she spotted Nick and Vanessa, leaving the popular Mastro’s Steakhouse, where a 4-oz kobe steak can cost as much as $240 and garlic mashed potatoes go for $15.

Jody said she pulled over across the street and began taking photographs, but what happened next came as a complete shock to her.

‘Nick’s not really on the radar. I just saw him and I figured I would get a shot of a couple coming out of a restaurant,’ she said. 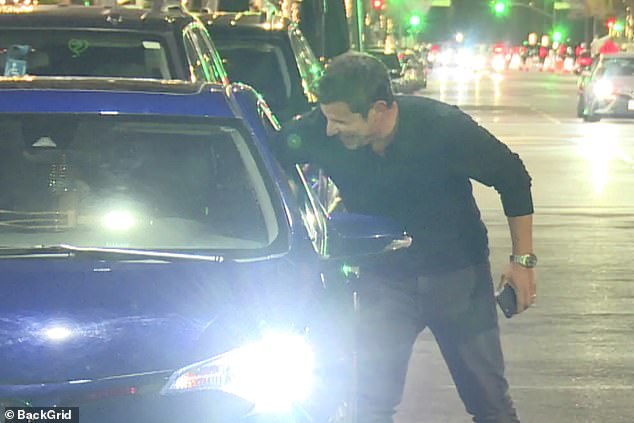 Tension: Last month, Nick was caught accosting a celebrity photographer, who said she feared he would ‘knock her out’ as he reached into her car window during a foul-mouthed rant

‘I have taken photos of him plenty of times and never had a problem, but this time was different.

‘He flipped me off and then I heard Vanessa say: “Go get ’em, open the door”, and then he started walking towards my car, all aggressive.

‘I immediately locked my door and rolled up my window as fast as I could. He then start punching the window. I thought he was going to break his hand, that’s how hard he was hitting the glass. I am surprised he didn’t shatter the window.’

Vanessa and Nick co-host Love Is Blind spin-off show The Ultimatum, which focuses on six couples after an ultimatum is issued, where they must decide to marry or move on.

In the couples on the show, one person in the relationship is ready for marriage while the other has their own doubts. 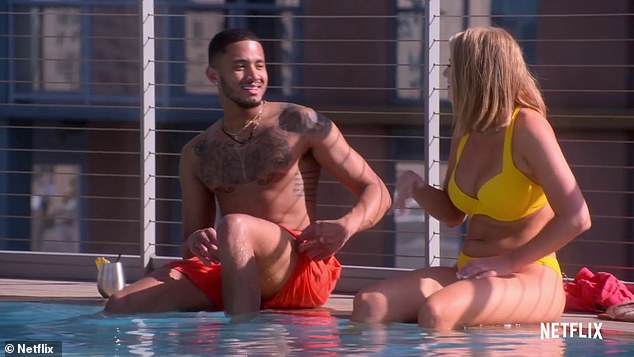 Drama: Vanessa and Nick co-host Love Is Blind spin-off show The Ultimatum, which focuses on six couples after an ultimatum is issued, where they must decide to marry or move on

They are issued an ultimatum and while they decide what they are going to do, they choose a new potential partner to get to know – from the other couples.

They are able to pick a new partner to live with for a three-week trial marriage, where they move in with each other to discover if they could have a successful relationship, or if their hearts remain with their existing partners.

The reason for the partner switch up is for the contestants to capture a ‘glimpse of two different possible futures,’ according to the streaming service.

After their trial marriages, they then reunite with their original partners and move back in together for three weeks, testing whether they are ready to get down on one knee – or if they must let their relationship go for good.

The last two episodes of the series – Ultimatum Day and the reunion show – dropped on Netflix on Wednesday and see the couple’s make their life-changing choice before catching fans up on their lives since the show. 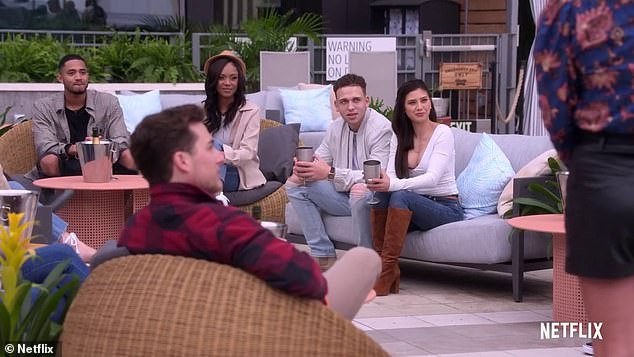 Big decisions: In the couples on the show, one person in the relationship is ready for marriage while the other has their own doubts