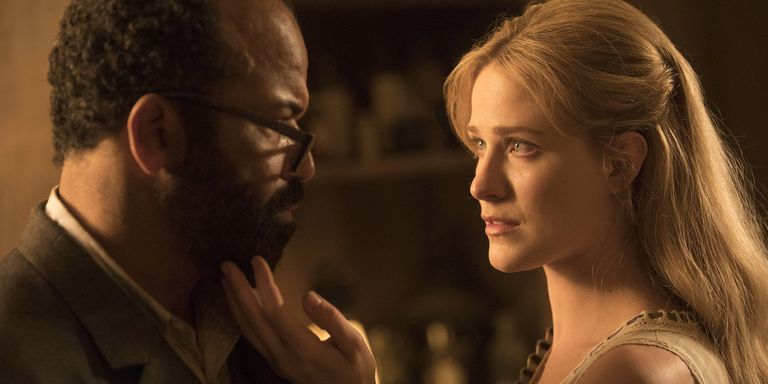 We’ve reached Episode 3 of Westworld’s new season, and at this point the theories are even more fun than the actual show. But before we dive in, it should be noted that a) This episode takes place in the present-day and two weeks in the past, and b) It introduces two new parks. In an effort to keep things organized because WTF there is so much going on, our recap is divided by timelines and characters.

As we established in Episode 1, present-day Bernard is recognizable due to a gray suit with piping:

And (as discovered by Reddit) he’s also recognizable by a distinct lack of scar on his face:

But there’s a popular fan theory that present-day Bernard is in a narrative loop, which Delos is making him play out in order to extract information. Let’s take a look at the evidence, shall we? First, there’s the fact that Bernard knew what Karl was going to say before he said it in Episode 1:

Even more significantly, there’s the fact that Westworld appears to be making continuity errors with present-day Bernard.

And it’s not just this helpfully-circled lack of bodies against the wall (thanks, Reddit!). There’s also a woman in a red dress who’s dead when Bernard rolls in, and she’s most definitely not there when the Man in Black wakes up post-massacre.

We know Westworld creators would never create a continuity error without having a good reason, and I’m inclined to think the reason is that Delos’ higher-ups have somewhat inaccurately recreated the massacre scene as part of an extravagant loop made to jog Bernard’s memory.

This theory is bolstered even more when present-day Bernard reunites with Charlotte in the Delos labs. She wastes no time asking him where Peter Abernathy might be, and the way she does so definitely seems like she’s playing her role in a scripted narrative.

The portion of this week’s episode devoted to Raj World, a park we’re seeing for the first time, essentially follows two humans, Grace (Katja Herbers) and Nicholas (Neil Jackson), who meet at the park, have sex, and—upon arriving at a remote campsite—realize their fellow guests have been killed by hosts. There are a few things to note:

We now know the Bengal tiger found drowned Episode 1 came from Raj World (which doesn’t officially have a name yet, but that’s what we’re calling it), and crossed over while chasing Grace. We can assume this Bengal is the same one Bernard found washed up on shore—but here’s the weird thing: Reddit discovered that the Bengal could be even more evidence that present-day Bernard is stuck in a loop. The proof? In Episode 1, Bernard stumbles across the tiger while he’s wearing a suit. In footage from the trailer, he stumbles across it wearing just a vest:

A Note on Grace

Based on the time Grace spent writing in her notebook, I think she’s either a long-time park-goer who’s obsessed with figuring out its secrets (much like the Man in Black), or a Delos employee. I’m leaning towards the latter, since she’s eventually found by Ghost Nation, who—based on their interest in Stubbs and Lee Sizemore (more on that in a second)—seem to be targeting employees.

Two Weeks Ago: Bernard and Charlotte

Okay, something weird is definitely going on with Bernard. Last time we saw him two weeks ago(chillin’ with the Drone Host, etc.), he was in his black party suit. During this week’s scenes? Gray suit.

I’m not saying this is definite proof that Bernard is living in a loop, but is it likely Bernard would find time to change from one three-piece suit into another three piece suit while his body is leaking fluid and he’s trying to save his life? Nope!

Yet narratively, Bernard and Charlotte’s story starts where we left off. They’re on a mission to locate Peter Abernathy in the park, and after finding him “playing human” with captured party guests, some Confederados roll in, capture Bernard and Peter, and Charlotte gets away. Which brings us to…

Dolores seems to have fully embraced the Wyatt side of her personality this week, and honestly, there’s not much to glean from her actions. TL;DR: she takes control of the Confederados at Fort Forlorn Hope, proves just how duplicitous she is by sacrificing them when Delos’ QA team rolls in, and gives a few more eye roll-inducing speeches.

More notably, Dolores reunites with her dad and recruits Bernard to figure out what’s wrong with him. Bernard finds out that Peter has an “immensely complex encryption key” hidden inside him, which he manages to break because he’s a robot genius. Here’s what Bernard finds that causes him to say “Oh my God”:

We don’t know the details of what’s on Peter’s file yet, because Charlotte and QA end up capturing him, but my personal theory is that Delos is flirting with human cloning.

Maeve runs into a Ghost Nation warrior and finds herself unable to command him with her voice. This makes sense, since Ghost Nation members didn’t respond to commands last season, when they took Stubbs.

That aside, Maeve, Lee, and Hector manage to escape into one of Delos’ underground bunkers, and they eventually run into Felix, Sebastian, and Armistice. And when they pop back up? You better believe they accidentally wander into Shogun World. (!!!!!!!!!!)