Home » Celebrities » What will Game Of Thrones fans make of House Of The Dragon?

What will Game Of Thrones fans make of House Of The Dragon? 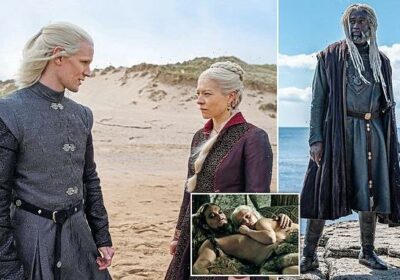 Game of Woke: Non-binary stars, gender-fluid characters and barely any sex and nudity… So what on earth will Game Of Thrones fans make of House Of The Dragon – the prequel to TV’s most risqué blockbuster?

When the blockbuster fantasy drama Game Of Thrones first aired more than a decade ago, it became known almost instantly for its violent bloodlust and frequent, gratuitous nudity.

From the very first episodes of George R. R. Martin’s eight-season epic there were graphic sex scenes, stories of rape and incest and even gory depictions of child murder.

But 11 years later, times have changed – even in the fantasy land of Westeros. For House Of The Dragon, the hotly anticipated prequel to the original series, has gone fully woke, according to Hollywood insiders. 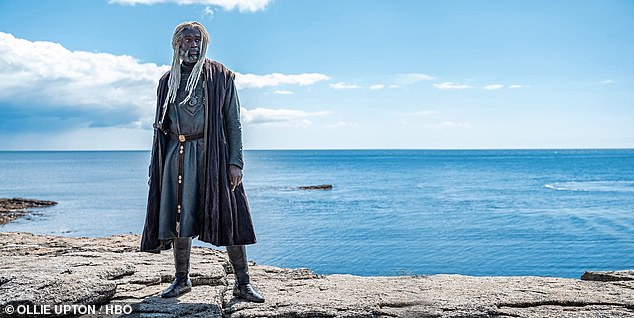 For prequel House of Dragon, set 200 years before Game of Thrones, expect non-binary actors, a new dynasty of powerful black characters and roles that are ‘sexually fluid’ and ‘androgynous’

Gone are the risqué scenes of full-frontal nudity and violence that shocked and delighted audiences in equal measure. In their place are non-binary actors, a new dynasty of powerful black characters and roles that are ‘sexually fluid’ and ‘androgynous’.

In this new era, set 200 years before Game Of Thrones, it is two women who battle for the show’s Iron Throne – the seat of power that controls the disparate regions of Westeros.

And rather than subjecting female actresses to sexual violence, new post-MeToo storylines are instead designed to showcase the ‘power’ of women by featuring gory scenes of childbirth.

A Hollywood executive linked to the new series told The Mail on Sunday: ‘The original show was made before the MeToo era. Graphic sex and nudity had never been seen on television like that before. But this new series had to take on board that we live in different times. The sex is handled very differently and there is far less of it. There is way more diversity. Game Of Thrones had only a couple of black characters, and one of those was killed off in chains.’

House Of The Dragon, which airs from August 22 on Sky Atlantic, is based on Martin’s book Fire & Blood and tells the story of the House of Targaryen and the bitter and brutal civil war known as the Dance of the Dragons.

One of those vying for the throne is Princess Rhaenyra Targaryen, played by British actor Emma D’Arcy, who in real life classifies as non-binary and uses the pronouns they/them. D’Arcy has described how the character is ‘terrified of getting locked into motherhood’.

‘Rhaenyra has an ongoing battle with what it means to be a woman and is a fundamental outsider,’ D’Arcy said. ‘She’s terrified of getting locked into motherhood and is aware of how her position would be different if she were male. 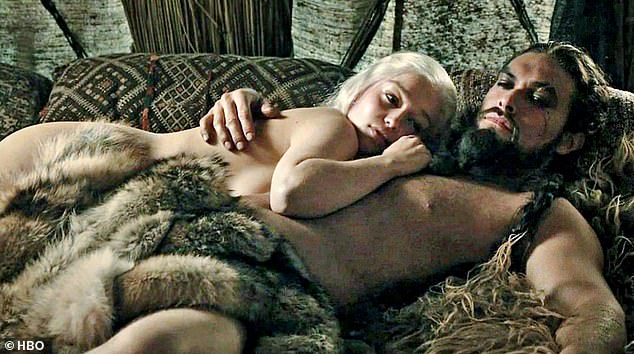 Actress Emilia Clarke, who played iconic character Daenerys Targaryen, the Queen of Dragons, in Game Of Thrones, has spoken before about her terror of nude scenes, which had left her in tears

‘I’m a non-binary person. I’ve always found myself both pulled and repelled by masculine and feminine identity and I think that plays out truthfully here.’

Former Doctor Who Matt Smith plays her uncle, Prince Daemon Targaryen, a character described as sexually ‘fluid’ and ‘weirdly androgynous’. In fact, one of the main themes of House Of The Dragon is, according to the Hollywood source, ‘men bad, women good’.

British star Olivia Cooke, who plays Alicent Hightower, stepmother to Princess Rhaenyra, explains: ‘There are times where Emma is on one stage and I’m on the other and we’re both surrounded by male characters being idiotic. And we know if all these men just f****d off, and it was just us two, the realm would be fine.’

It means there is far less nudity and sexual violence than in the original series – although it has not been cut out entirely. Explaining the decision, director Miguel Sapochnik has said that, while the new show ‘pulls back’ on the amount of sex scenes, you ‘can’t ignore’ the violence perpetrated on women by men throughout history. However, he adds: ‘It shouldn’t be glorified.’

In its place are some graphic scenes of childbirth – which may still cause audiences to wince. ‘The child bed is our battlefield,’ the source said.

And referring to the infamous ‘Red Wedding’ massacre in the original series, which killed off several major characters in a legendary bloodbath, the source added: ‘This does for childbirth what Game Of Thrones did for weddings.’

But in today’s film industry, there is a wider problem for production teams to consider that did not exist in 2011, when the original drama first aired – that actresses no longer want to perform in nude scenes that could be considered gratuitous. The Hollywood source said: ‘Since MeToo, actresses have been far less willing to do graphic sex scenes. There was a sex scene co-ordinator on this series to make sure everyone was comfortable. But there’s way less sex.’

Cooke has admitted she ‘wouldn’t feel comfortable’ being part of a series that used ‘egregious graphic violence’ towards women just to ‘tantalise viewers’.

‘I was lucky enough to read the script before, and it has changed a lot from the first few seasons,’ she said. ‘I don’t think they’d be in their right minds to include any of that any more.’

Actress Emilia Clarke, who played iconic character Daenerys Targaryen, the Queen of Dragons, in Game Of Thrones, has spoken before about her terror of nude scenes, which had left her in tears. 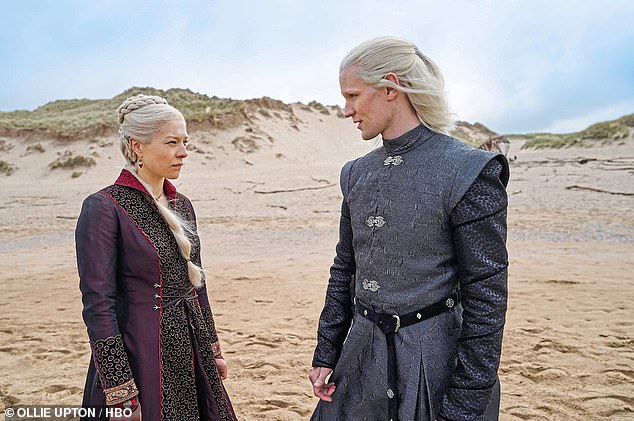 ‘I’d come fresh from drama school,’ she said, ‘I’d never been on a film set… and now I’m on a film set completely naked with all of these people.’ But Clarke said her co-star Jason Momoa, whose character Khal Drogo ‘virtually rapes’ Daenerys on their wedding night, was ‘so kind and considerate’.

Carice Van Houten, who featured in numerous nude scenes as the Red Priestess Melisandre on the original show, also now reflects differently on those days.

‘In retrospect I thought, “Why did that scene have to be nude? Why was that normal?” I did question things [after MeToo] and it was not so much that I was blaming anyone, but that’s just how we evolved, and just how the movement affected me.’

Other notable changes audiences can expect include the introduction of a new influential black family, the House of Velaryon, headed by Lord Corlys Velaryon.

Known as the Sea Snake, he is played by veteran British Hollywood star Steve Toussaint.

There is also Asian representation in the form of Japanese-born British actress Sonoya Mizuno, who plays cunning Mysaria.

According to the show’s official website: ‘Mysaria came to Westeros with nothing, was sold more times than she can recall and could have wilted but instead rose to become the most trusted, and most unlikely, ally of Prince Daemon Targaryen, the heir to the throne.’

It also features Notting Hill actor Rhys Ifans as Otto Hightower, the Hand of the King.

So far, only creator Martin has seen all ten episodes of the new series.

While Game Of Thrones ended in controversy – the eighth and last season was panned by critics and fans – Martin says the prequel is ‘powerful, visceral, dark… like a Shakespearean tragedy’.

And although it airs just two weeks before Amazon launches its £400 million Lord Of The Rings series The Rings Of Power – the most expensive TV show ever made – Martin is philosophical that life will not imitate his art.