Home » Celebrities » What You Don’t Know About Sha’Carri Richardson

What You Don’t Know About Sha’Carri Richardson 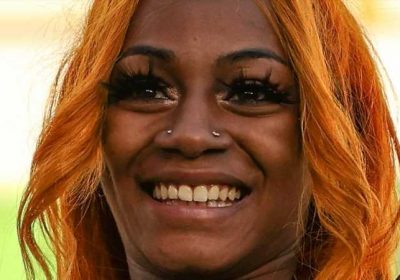 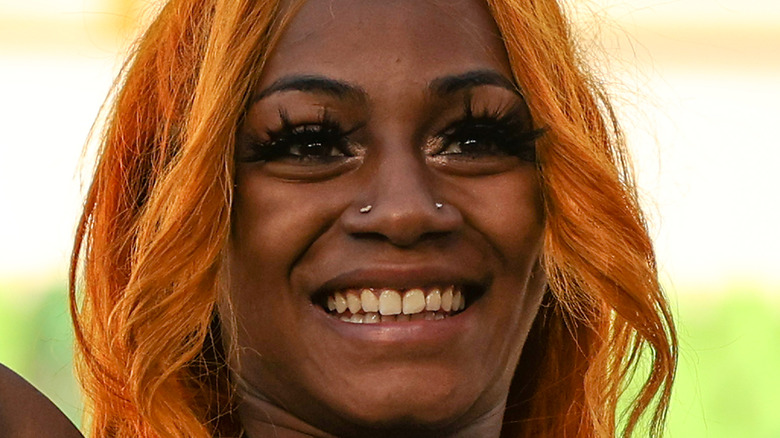 The Olympics are where athletes’ dreams can either come true, or end in disappointment. Sadly, the latter was true of one Olympic hopeful even before the 2021 Tokyo Games began. Track and field star Sha’Carri Richardson ran the 100-meter dash in a blazingly fast 10.86 seconds in the Olympic trials, only to be disqualified from the U.S. team weeks later after testing positive for THC, a chemical in marijuana (via CNN). USA Track & Field opted not to include her in the Olympic 4×100 relay event as well — meaning Richardson will have to wait until 2024 for another shot at Olympic glory.

Richardson admitted that she’d used pot as a coping mechanism following the recent death of her mother, but opted not to contest the decision. Appearing on the “Today” show, she said, “I just want to take responsibility for my actions. I know what I did, I know what I’m supposed to do, I’m allowed not to do, and I still made that decision. I’m not making an excuse or looking for any empathy in my case” (via CNN).

USA Track & Field offered support, saying (via Yahoo! News): “First and foremost, we are incredibly sympathetic toward Sha’Carri Richardson’s extenuating circumstances and strongly applaud her accountability — and will offer her our continued support both on and off the track.”

While we won’t be seeing this sprinter winning Olympic gold this summer, it certainly won’t be the last we see of this dynamic young woman.

Sha'Carri Richardson was raised by a strong woman 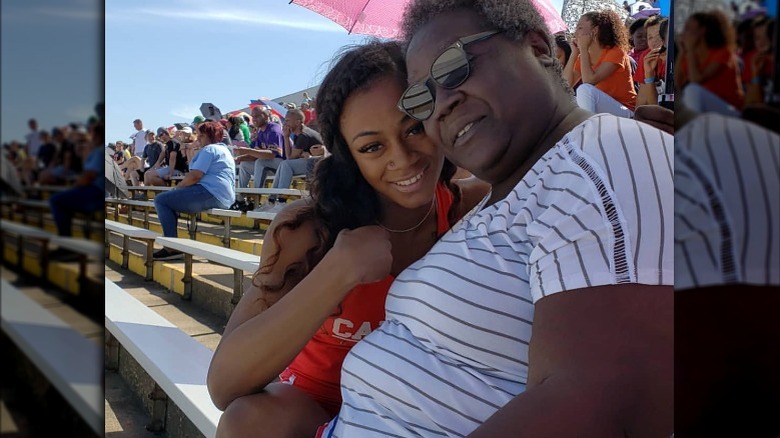 Viewers are still talking about the moment immediately after Sha’Carri Richardson won the sprinting event. She ran into the stands to give a huge hug to her grandmother, Betty Harp, also known as “Big Momma.” She said later, “To be able to have her here at the biggest meet in my life, and to cross the finish line and run up the steps to hug her knowing I’m an Olympian, actually that’s probably better than winning the race” (via Romper).

Richardson doesn’t speak publicly about her biological mother, except to say that she “is grateful for giving me life, bringing me into the world” (via The Sun). She was raised in Dallas, Texas, by Harp — whom she calls “my superwoman” — and by other family members, including her aunt and great-grandfather. As a freshman at Louisiana State University, she first came to public attention when she ran the 100 meters in record time at the National Collegiate Athletic Association Championships. She beat her personal best last April, just two months before the Olympic trials.

The loss of her biological mother a week before the Olympic trials clearly shook the aspiring superstar, but she took comfort in her other loved ones. “My family has kept me grounded. This year has been crazy for me,” she said at the time (via The Sun). “Last week, finding out my biological mother passed away and still choosing to pursue my dreams … and still making sure to make the family that I do still have on this earth proud.”

Richardson is also famous for her personal style 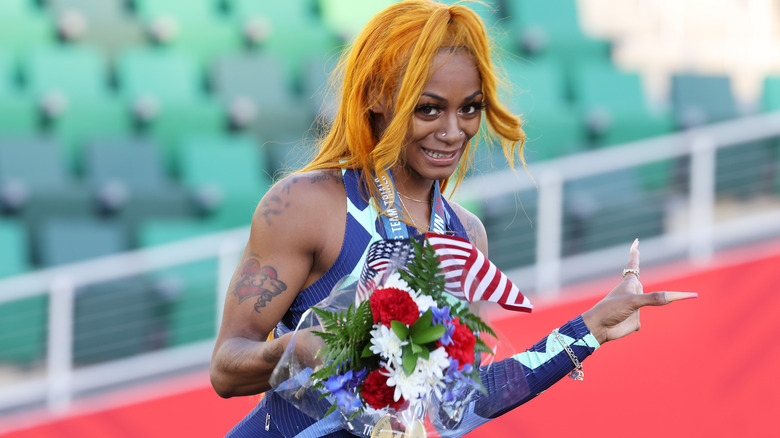 Sha’Carri Richardson has been compared to Florence “FloJo” Griffith-Joyner for more reasons than one. In addition to her track skills (her world records in the 100- and 200-meter events still stand), the late Olympic star was also known for her attention-getting clothes and manicures. Richardson, too, mixes athleticism with style: She sports bright track gear, multiple tattoos, long nails, and lashes for days.

She also enjoys experimenting with hair color, and for the Olympic trials, she let a special person choose the shade: her girlfriend. (She has not identified her publicly.) Of the bright orange hue, Richardson told The Washington Post, “She said it just spoke to her, the fact that it was just so loud and vibrant. That’s who I am. She just wanted me to be able to make a statement — let’s continue to show the world I’m a force to be reckoned with.”

And she certainly is. On her Twitter account shortly after her Olympic ban, she wrote, “I’m sorry, I can’t be y’all Olympic Champ this year but I promise I’ll be your World Champ next year.”