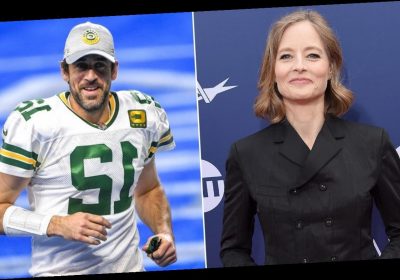 Jodie Foster isn’t giving credence to the fan theory that she is responsible for setting up Aaron Rodgers with his fiancée, Shailene Woodley. The 58-year-old actress and director appeared on Thursday’s Jimmy Kimmel Live where the host asked her about Rodgers’ recent shout out during his acceptance speech for the 2020 AP Most Valuable Player honor.

Kimmel played the clip in which Rodgers named Foster as a part of his team off the field.

“You see he said, ‘my team,’ even though he said, ‘off the field,’ that makes me a Green Bay Packer,” Foster, a longtime Packers fan, joked. “People keep saying to me, ‘No, Jodie, that does not mean you’re part of the team.’ But it does mean I’m part of the team.”

Foster, who is co-starring in The Mauritanian with Woodley, insisted she didn’t know the quarterback when he gave her that shout-out.

“He just knows I’m his biggest fan,” she said, when Kimmel asked if she knew he was going to thank her.

Kimmel pressed, “He mentions his fiancée, who is Shailene Woodley, who is your co-star in this particular movie, and that’s just a total coincidence?”

“I don’t know if it’s a coincidence. But yes, she is and she’s fantastic,” Foster said, further confirming that Woodley and Rodgers are engaged. “So we spent a lot of time on The Mauritanian together in a little tent with air conditioning spitting at us talking about our lives and recipes and people we hate, things like that. And the Green Bay Packers somehow came up!”

During the same event where he thanked Foster earlier this month, Rodgers also revealed he was engaged. The news came as a surprise to fans, who didn’t know he was even dating Woodley.

After Rodgers and Woodley’s relationship came to light, a source told ET that they’ve been together for a few months. “They have been keeping their relationship private for the most part, but are very into each other,” the source said.