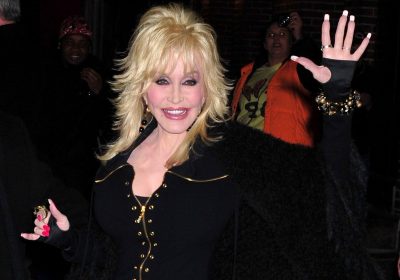 A few key items make up Dolly Parton‘s signature style: voluminous blonde hair, rhinestones, bright makeup, and flashy fingerless gloves. For several years, fans have been speculating why the “Jolene” singer is never seen without her famous hand accessories. Her long-time creative director, who’s in charge of her image, has the answer.

According to The Sun, the “9 to 5” singer began wearing gloves in public in 2010. The site quoted the owner of the Dollymania fan page, Duane Gordon, speculating as to why.

“She has even been asked about them on a couple of television interviews, and she joked about them, saying in one she was wearing them because she was cold and in another because she thought they were cute,” Gordon said in 2011. “However, I can relay third-hand information that she was asked about the gloves by fans while filming scenes for her upcoming movie Joyful Noise and told them that last year she had had corrective hand surgery (medical, not cosmetic) and it left a scar that she’s covering.”

“Again, I’ve not heard that directly from Dolly or her management, but I’m told that’s the answer she gave privately in Atlanta to those who asked,” he added.

Another school of thought about why Parton may never leave the house without her gloves is that they, along with her long sleeves, are designed to hide her tattoos.

“Most of the tattoos, when I first started, I was covering up some scars that I had, ‘cause I have a tendency to have keloid scar tissue, and I have a tendency where, if I have any kind of scars anywhere, then they kind of have a purple tinge that I can never get rid of,” she told Vanity Fair. “So mine are all pastels, what few that I have, and they’re meant to cover some scars. I’m not trying to make some big, bold statement.”

So did the Queen of Country cover her hands in tattoos in 2010 but vowed to never show them to the public? According to her creative director Steve Summers, that’s not what happened.

In an interview with InStyle in 2019, Summers spoke about why the “When Life is Good Again” singer chooses to sport fingerless gloves while in the public eye. At the time, he’d been working with Parton for 29 years. He’s responsible for her overall image — wardrobe included.