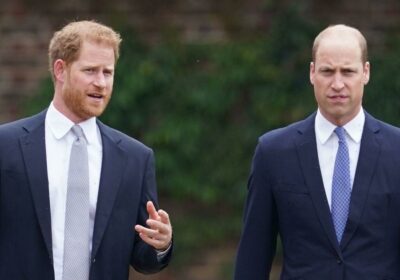 Prince Harry and Prince William may walk side-by-side behind the Queen’s coffin at her funeral.

The two brothers have had an undeniably strained relationship in recent years, but appear to now want to put on a united front in light of their grandmother the Queen’s death.

The late monarch died on Thursday 8 September, and her funeral will take place on Monday 19 September at Westminster Abbey.

At their grandfather’s Prince Philip’s funeral in April of last year, William, 40, and Harry, 37, walked near to one another behind his coffin, but were separated by their cousin Peter Phillips, 44.

Discussing the potential for the Prince of Wales and the Duke of Sussex to walk together at the Queen’s funeral, a source told The Sun: “We are certainly not in the same place as Philip’s funeral when William and Harry didn’t walk side by side.

“Things haven’t changed but it is not as intense and they can co-exist.

“But the flower visit really doesn’t change anything. It is the same situation as at Prince Philip’s funeral when William and Harry put their differences aside and supported each other and their families in that moment.”

Harry and William were pictured side-by-side at their mother Princess Diana’s funeral in September 1997.

The insider’s comments come after the estranged siblings surprised the nation over the weekend as they were spotted out together alongside their wives Kate Middleton, Princess of Wales, and Meghan Markle.

The foursome greeted mourners on the street as they were seen together for the first time since Commonwealth Day on March 9, 2020.

While the two couples put on a united front, it’s said the last-minute meet-up only took place after "extended negotiations" which delayed their arrival by 45 minutes.

Meghan's friend and unofficial spokesperson for the Sussexes, Omid Scobie, claimed on Twitter that the invitation was made at the "11th hour".

Hinting that the brothers are prepared to work towards rebuilding the bond they once had, he added: "It is, without a doubt, a significant moment in the history of the relationship between the two brothers."

After speaking to mourners, the Prince and Princess of Wales and the Duke and Duchess of Sussex left in the same vehicle after finishing their walkabout outside Windsor Castle.

It was here that royal fans noted the sweet moment Prince Harry opened the car door for his wife and waited until she was safely inside to close it.

Onlookers and Royal fans were quick to flock to social media to praise Prince Harry for the romantic gesture.

One person wrote: "Say what you will about Harry and Meghan but he puts his arm around her back and opens her car door for her. He loves her. That gets a swoon from me."

Another posted: "Harry getting the car door for Meghan" with a crying emoji.