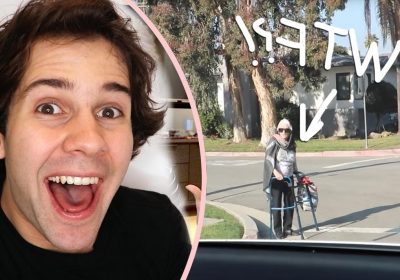 We’re not saying David Dobrik is a sociopath, but we will say this: all the folks who’ve been saying so after his recent controversies certainly have some more evidence today.

On Wednesday Rolling Stone published a profile of the huge YouTube star, and it does not do him any favors. If you’re not familiar, Dobrik boasts a staggering 18.3 MILLION subscribers to his channel, in which he posts pranks and wild experiences with his “Vlog Squad.”

The Rolling Stone interviewer really dives deep into the controversy and its relatively minor fallout, though Dobrik is reluctant to talk about it — and as the writer points out, is still not holding himself accountable for any part of it, as he says:

“I knew where I went wrong, but I was not in the room, I was not aware of what was going on. None of my friends were.”

Well, one was. The alleged rapist was your friend, remember?? He continues:

“They would have kicked that f**king door down if anybody knew what was going on, allegedly.”

The language. Adding that last “allegedly.” Like he still doesn’t quite believe it or something.

For instance, what was Dobrik thinking with that first apology video? Putting it on a smaller side channel, not the big one, and turning off the comments? He tells the outlet:

“The comments are always such a hostile place. I didn’t want to be reading and hearing what conclusions they were coming to, because I knew they weren’t true.”

Um, except for the ones that were??

The interviewer also points out Dobrik didn’t even mention the Durte Dom allegations in the first apology video, to which he responds:

“I couldn’t see how they were connected to me.”

Not only that, he tells the mag he still feels that way, even though he cut ties with Zeglaitis. So… did he only distance himself because of bad PR?? It certainly sounds like it.

In fact, a lot of what he puts out for his image seems to not quite line up with reality. For instance he claims he only put everything together about his squad member in 2019, when a different woman came forward with accusations:

However, Dom had been accused of assault way back in 2017, by YouTuber Ally Hardesty — and there’s proof Dobrik knew all about it. On Dom’s apology video for that incident, he wrote the comment:

“Proud of you Dom. Being an idiot is easy. Owning up to it is tough! Glad you made this!!!”

“Being an idiot”?? He was accused of sexually assaulting Hardesty at VidCon. She spoke with RS as well, saying Dobrik giving Zeglaitis the OK “really hurt”:

“When you keep that company and enable that sort of behavior, I think you’re a huge part of the problem… If had taken a different approach to it, maybe Dom wouldn’t have assaulted other people.”

Oh, and as for finally cutting ties with Zeglaitis in 2019? Yeah, Rolling Stone found social media posts proving they were hanging out in 2020. So even that was a lie?

‘Nobody Wants To Do This Stunt’

The other controversy was, of course, when he maimed his friend Jeff Wittek in a stunt gone wrong. Well, we say gone wrong, but swinging from the moving bucket of an excavator was inherently incredibly dangerous. Frankly, it would have been more shocking if it went right, and no one got hurt.

Wittek explains why he eventually agreed to do the ill-advised stunt:

“Nobody wants to do this stunt, and we’re on the beach for six hours as David’s driving this thing, and I’m just like, ‘All right, whatever — you want me to get on it, I don’t care.’ We’re all flown here to do a job, and the job is to help him make the best video he can possibly make, which will in turn help all of us as a group.”

And just like that, Dobrik’s power over his friends nearly got one killed. Wittek was swung around and smashed his head into the machine, giving him life-threatening eye and brain injuries.

Wittek eventually told his side of the story. While Dobrik paid for his hospital bills, he also largely ignored him. Wittek says now:

“I was dealing with brain damage and serious mental-health issues, and I would just look at my phone and see that he’s hosting a new Discovery Channel show, or had bought a new house. These things made it a lot harder for me to forgive him.”

Dobrik tells RS he didn’t want Wittek to think he was pitying him. SERIOUSLY?! He doesn’t just have an excuse for not visiting his friend in the hospital, he thinks he was doing the right thing??

As far as getting people to make terrible choices for his videos, Dobrik says he is more aware now of the “power dynamic” with his friends — how his brand is paying for all of them, and their livelihood depends on being in his good graces. The good graces of someone willing to risk their lives.

Speaking on getting people to be in his videos, Dobrik says:

“People wanted to be in them, and they would do anything they could to be in them, and almost lose their sense of what’s right in front of the camera. Their eyes would glaze over, and they’d be like, ‘I’m down for whatever.’ And I didn’t realize that. The power dynamic is really real, and it sucks that I realized it this way, and I wish I’d learned about it in a different way… I don’t know. It could’ve been so avoided.”

The easiest way we can think of off the top of our heads? If the guy at the center of all this showed concern for the well-being of those around him.

Dobrik says, discussing a joke but apparently not joking:

“My friends call me a sociopath. That’s kind of like the ongoing joke. And, yeah, I think now people have more of a reason to be like, ‘Oh, they weren’t kidding about the sociopath stuff.’”

The cherry on top of all of this is that even in the making of the Rolling Stone article in which he’s supposed to be sharing his side of things, Dobrik is completely full of crap.

The interviewer describes traveling in a car with Dobrik and his crew when they see a little old lady slowly crossing the street in front of the car. Without a second thought, the young star stops the conversation and hops out to help her across, saying:

When he jumps back into the car, he’s laughing, admitting to the journalist:

“We did that on purpose for you. We wanted to have a grandma crossing the street, but I couldn’t keep my composure.”

Only this time the “prank” aspect seems to have been lost, certainly on the journo who asks if the faked scene was meant to elicit sympathy amid his many controversies. Dobrik responds:

“No, no, no. We were just trying to do something stupid and silly.”

It really seems like the reporter nailed the intent there — and Dobrik just wasn’t able to keep a straight face.

Innerestingly, the reporter notes on the drive back, they saw a young girl panhandling, and of course there was the immediate suspicion this was another setup. After all, half his videos these days are huge gestures in which he surprises his friends with expensive gifts. Maybe this a chance to show some of that generosity? But no — this was a real person. So Dobrik completely ignored her.

He admitted to the interviewer that he did see the girl, but once again he had an excuse for not helping:

“I wanted to give that person money, but I didn’t want to do it in front of you. It’s so easy for me to give somebody cash, so easy, so easy. whenever I can, I do that…. I did that thing with you, that was supposed to be cheesy and goofy, but I didn’t want to look like I was putting on some kind of a performance.”

Read the rest of the brutal Rolling Stone piece HERE. What do YOU think of his answers??