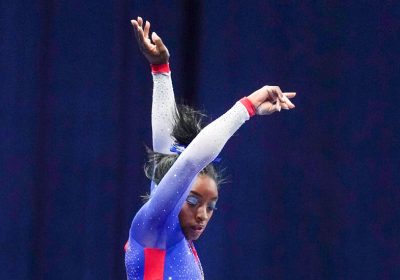 ST. LOUIS — Here’s information that is technically a spoiler about the U.S. Olympic women’s gymnastics trials on Sunday night that’s not really much of a spoiler at all: Simone Biles, the four-time Olympic gold medalist, will win.

By doing so, Biles, 24, will secure one of the two automatic berths on the U.S. women’s team headed to Tokyo, making her many sponsors cheer. (The runner-up in the all-around event will receive the other.) Shall I spoil the Games, too, by declaring that Biles will win it all? Sorry to ruin it for you, but she is so far ahead of everyone else that she will, making her the first woman to successfully defend the Olympic all-around gold medal in more than 50 years.

The remaining question at these Olympic trials is which American gymnasts will be Biles’s supporting cast. Find out that answer Sunday night on Day 2 of the women’s event in St. Louis. The team, including up to five alternates, will be announced not more than 30 minutes after the event ends.

Televised coverage will begin at 8 p.m. on NBC and on the Olympic Channel. The event will also be streamed on the NBC Olympics website and on NBC’s Peacock platform. 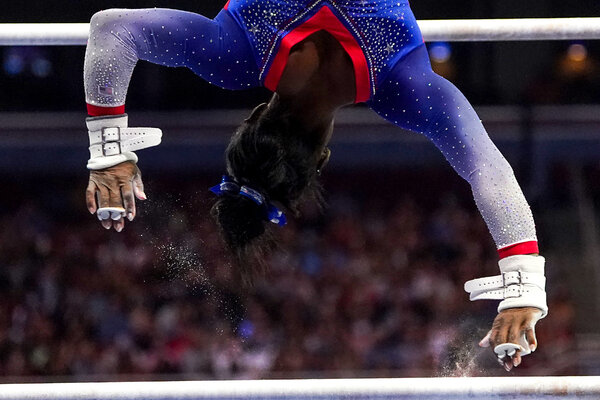 How will the team be chosen?

For starters, two categories of Olympic berths are up for grabs.

One category is for the four-woman team that will vie for the team gold medal. Choosing this team is not as easy as just picking the top four women in the all-around final at the trials. Some calculations are needed to create the strongest, highest scoring, squad for the team final.

In the team final at the Olympics, each country chooses three of its gymnasts to compete on each apparatus — the balance beam, the uneven bars, the vault and the floor exercise — and all three of those gymnasts’ scores count.

The top two finishers at trials automatically make the four-woman team. The two other gymnasts will be chosen by a U.S.A. Gymnastics committee led by the women’s high-performance team coordinator, Tom Forster. A computer will aid the committee in determining the highest scoring combination of gymnasts, using the gymnasts’ top scores.

The other category available for the Olympics is for individuals, or event specialists, who will not compete in the team event and are out to win gold for themselves. They will wear leotards unlike the ones their team wears, so viewers can recognize them.

One of these individual spots has been claimed by Jade Carey of Phoenix, who qualified based on her strong finish in the F.I.G. World Cup series. The other spot will be chosen by a U.S.A. Gymnastics committee that will consider which woman has the best chance to win a medal on a specific apparatus.

Here are the leading candidates not named Simone Biles.

Sunisa Lee is hoping to represent her Hmong community in St. Paul, Minn., by making her first Olympic team. And if anyone not named Biles has a chance for a gold medal, it is Lee, 18. Her uneven bars set is the hardest and most complicated in the world. If she nails it at the Games, she will be nearly impossible to beat.

Jordan Chiles, 20, has proved, time and again, that she is a gymnast you can count on. To be precise, I’ve counted 20 routines of 20 she has competed this year that have been devoid of major mistakes. Good thing she didn’t quit gymnastics in 2018 as she briefly considered. Right now, she is the most consistent performer on the national team.