Home » Sport » A Novel Idea in the Majors: Using Batting Practice to Get Better

A Novel Idea in the Majors: Using Batting Practice to Get Better While meeting with the Houston Astros’ instructional-league players in September 2013, the roving hitting instructor Jeff Albert asked the young prospects a series of questions.

Do you swing and miss in the game? Yes, they said.

When’s the last time you swung and missed in practice? Never.

“Does this make sense?” Albert asked at the end. “Does this match up with what we’re doing?”

When the players agreed that their batting practice and games had little in common, Albert changed things up to replicate game situations: Coaches wheeled the L-screen closer to the plate, and pitching machines spewed high-velocity fastballs and breaking pitches — sometimes side by side — as well as from different angles.

The players started breaking so many bats in practice — which rarely happened in their previous iteration of B.P. — that the custodian stopped emptying the barrel of wooden shards. The changes implemented by Albert soon trickled up the system all the way to the Astros’ major league club.

“B.P. seemed like the hardest thing in the world,” said infielder Tyler Wolfe, who played in the Astros’ farm system in 2016 and 2017. “Before that, I thought the game was always pretty tough. Then we would take B.P. like that, and the game almost seemed easier after that.” 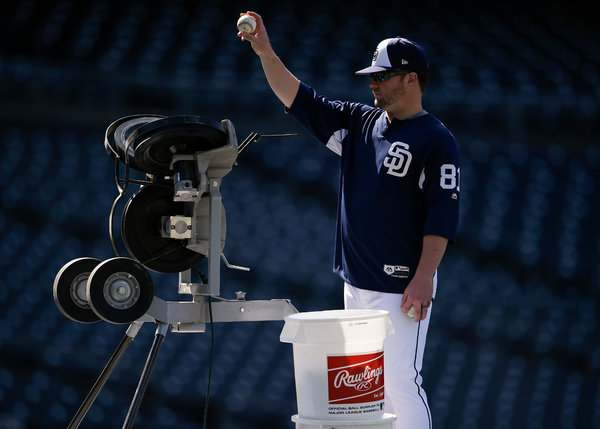 The staid tradition of batting practice — with its center-cut pitches thrown at speeds in the low 50s — is documented as far back as the late 1880s and has largely remained untouched in major league diamonds. Such game preparation, however, is in direct opposition to various principles of motor learning and vision sciences that suggest traditional batting practice is not only unhelpful but detrimental. So teams are searching for ways to make their B.P. more game-like.

The Reds assistant hitting coach Donnie Ecker summed up the approach: “If you want to sprint faster, you should practice sprinting faster.”

Much of this innovation is happening out of public view — in the minors or in the indoor batting cages at big league ballparks — making an exact accounting of adopters an impossible task. The Astros have implemented competitive batting practice throughout their organization, and have been joined in varying degrees by at least the Blue Jays, Phillies and Reds. The Cardinals and Orioles are among the clubs exploring similar plans.

“If your results are too good in practice, the practice is probably too easy, and you’re not learning something new,” said Albert, who joined the Cardinals as hitting coach last winter. “You’re just performing something you’re already good at it. And there’s certain value for that, especially in the big leagues.

Albert first explored the idea in conversations with Sig Mejdal in St. Louis in 2008 and 2009, when Albert was a Class A hitting coach and Mejdal was an analyst for the franchise. Jeff Luhnow was a Cardinals vice president overseeing scouting and development, but the timing wasn’t right for something radical.

But things realigned in 2013 as the trio was reunited in Houston with Luhnow overseeing all baseball operations and Mejdal as a top adviser. (Luhnow declined to comment for this story.)

“Obviously, if you look at a traditional batting practice, that’s wonderful if, at seven o’clock, you’re going to have a home run derby,” said Mejdal, who joined the Orioles as assistant general manager last winter. “But you’re not. You’re going to have a pitcher who’s motivated to get you out, and that’s the opposite of the batting practice pitcher.”

But not everyone in baseball is ready to embrace the new methods. When Mejdal was on the coaching staff of the Astros’ Class A team, the Tri-City Valleycats, in 2017, he and Albert were rolling a pitching machine onto the field for batting practice during a series on the road. A groundskeeper for the home team yelled out a profane remark questioning their manhood.

“It may seem like an insignificant or easy change, but it’s really ingrained and it is a significant change in culture,” Mejdal said.

And not all batters feel the need to give up their B.P. routines. The Reds’ star first baseman, Joey Votto, mixes in more-challenging batting drills “every so often,” he said, but he cautioned against making it a daily ritual.

“One of the issues you run into with a really long season is, if you make it too competitive, you have a tendency to burn out,” he said.

J.D. Martinez of the Red Sox viewed batting practice as “symptomatic” rather than prescriptive.

“You go to the doctor, they don’t just give you antibiotics,” he said. “They check you out. It’s kind of the same thing: What’s wrong with you?”

Yankees infielder D.J. LeMahieu said he and most of his teammates might experiment with drills during early hitting in the cage but added, “Once B.P. starts, it’s building that confidence and getting ready for the game.”

Daniel Laby, an ophthalmologist who has consulted for the Red Sox, Dodgers, Cubs and Astros, published an essay entitled “The Visual Case Against Batting Practice” two years ago. Traditional B.P. was so different from live game situations that even watching practice swings could be harmful for batters, he said.

“They don’t get any of the benefit because they’re not actually swinging the bat,” Laby said, “but they do learn — incorrectly — how to anticipate and time the swing on the ball that’s nothing like what they’re going to see against a mound pitcher.”

Guillermo Martinez, the Blue Jays coach, said his motivation for altering the practice was mental as much as physical or visual, saying he wanted players to “learn how to compete” by clearing their minds of anxieties and emotions.

“Honestly, it’s not really a new-school thing,” Martinez said, adding: “If you pay attention to the great hitters throughout history, they all find a way to challenge themselves. I remember watching on YouTube, Edgar Martinez, he had a pitching machine that could fire 120-, 130-miles-per-hour tennis balls.”

Yankees outfielder Mike Tauchman, who regularly pinch-hit for the Rockies the past two years, said he would try to make sure his eyes were at “game speed” by cranking up the pitching machine in the middle innings when he was waiting to enter a game.

“I don’t want my swing to be conditioned for a 50-mile-an-hour lob right down the middle,” he said. “It needs to be ready to hit potentially 95 and up.

“You try, but there really is no substitute for a human standing 60 feet, 6 inches away, throwing as hard as he can.”