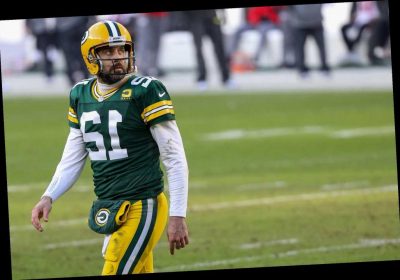 Aaron Rodgers wants a new contract from the Packers

Brett Favre: How worried should Packers be over ‘painful’ Aaron Rodgers comments

Packers quarterback Aaron Rodgers tried to clarify his postgame comments from Sunday, in which he said his future in Green Bay was “uncertain.”

Appearing on SiriusXM’s “Pat McAfee Show,” Rodgers was asked Tuesday about the widespread speculation regarding where he stands with the Packers based on what he said following his team’s 31-26 NFC Championship loss to the Buccaneers.

“I don’t think I said anything that I haven’t said before,” Rodgers said. “Ultimately my future is not in my control. I was thinking about Aaron Jones and Corey Linsley [both pending free agents]. I don’t see a reason why I shouldn’t be back.”

Rodgers added that it’s still early in Green Bay’s offseason and alluded that he’ll be around the team this week.

“I am not like jetting out of town and ‘sayonara Green Bay,’” Rodgers said. “There’s conversations to be had. I’m going to have them with the right people but it’s the same convo every year.

“There’s no big I’m going to come to the table I need this and this… We have honest convos about where were at every single year.”

Green Bay CEO Mark Murphy said Monday on WNFL’s “The 5th Quarter Show” that the organization is not “idiots,” referring to the notion that they would let go of their franchise quarterback. He later asserted that Rodgers would be back and added that “he’s our leader.”

Rodgers, who has three years left on a four-year, $134 million deal, reportedly wants a new contract.

The 37-year-old Rodgers is the favorite to win MVP after posting a career-high 70.7 completion percentage and 48 touchdowns this season and leading Green Bay to the No. 1 seed in the NFC.

The speculation surrounding Rodgers’ future in Green Bay initially took off at the 2020 NFL Draft, when the Packers traded up in the first round to select Utah State quarterback Jordan Love 26th overall. Many thought then the writing was on the wall for Rodgers, who admitted he wasn’t “thrilled” with the Packers’ draft choice.