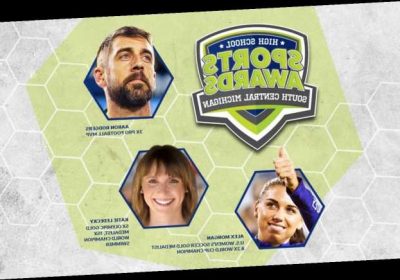 Top professional athletes will help recognize students by announcing the winner in each sport they represent. The show includes honorees, finalists and winners in more than 20 sports and will also recognize non-sporting excellence in a variety of categories. The awards program culminates with some of the biggest names in professional sports announcing the coach of the year and male and female athletes of the year.

Rodgers, 37, comes off a stellar year for the Green Bay Packers where he won the NFL MVP award, the AP MVP Award and the FedEx Player of the Year Award. In turn, he will announce the selections for players of the year in football.

Morgan, who most recently was part of the 2019 FIFA Women’s World Cup team, has been an advocate for improving pay for professional female athletes. She was the 2018 US Soccer Female Player of the Year and was named to the 2021 SheBelieves Cup roster in February. Morgan will announce the top players in male and female soccer for the awards program.

The top swimming and diving student athletes will be named by Ledecky, who at 23 is not far removed from her own high-school accolades. Ledecky is the most decorated female swimmer of all time with five Olympic gold medals and 15 World Championship gold medals. She’s also the world record holder in the women’s 400-, 800-, and 1500-meter freestyle. She will be looking to add to her list of accomplishments at the 2021 Tokyo Olympic Games.

The South Central Michigan High School Sports Awards is a multi-month student athlete recognition program that culminates in a year-end awards show. Due to COVID-19 safety precautions for students and guest speakers, the event was converted to an on-demand broadcast show for 2021. Honoree selections for state sanctioned sports, who are all featured in the show, are announced throughout the year on the event website.

The show will be free to watch on any smartphone or computer thanks to local business sponsors. Honorees should register on the show website to reserve their complimentary athlete gift box, which is scheduled to arrive approximately one week prior to the show. Registrations are also used to send out awards for winners following the show.

The most elite high school athletes, coaches and teams from across the U.S will be featured in the inaugural USA TODAY High School Sports Awards show. The Michigan athlete of the year winners will be among the national honorees in cross country, tennis, golf, soccer, volleyball, football, hockey, swimming and diving, lacrosse, wrestling, basketball, softball, track and field, baseball and gymnastics.