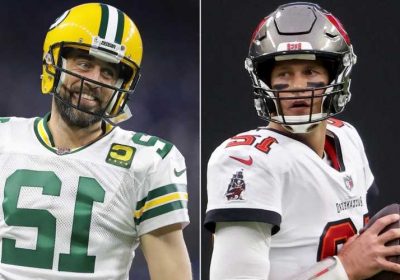 Aaron Rodgers’ only lifeline if he wants to escape the Packers

Tom Brady may be king of the memes, but Aaron Rodgers takes top marks with his sharp tongue.

On Wednesday, the Green Bay Packers quarterback took aim at the 2021 Super Bowl MVP in a new video leading up to The Match, the fourth iteration of the televised match-play event with Bryson DeChambeau and Phil Mickelson slated for July 6.

“Here’s Tommy on the green. First hole and he actually rolls it in,” Rodgers said of Brady’s performance in last year’s Match III event, when he was partnered with Mickelson against Peyton Manning and Tiger Woods.

Rodgers — who is having quite the offseason between alleged Packers discord and a Hawaiian getaway with fiancée Shailene Woodley — continued to roast Brady, 41. Notably, he brought up the moment the Tampa Bay Buccaneers quarterback ripped his pants on the green.

“But then the shot of the match here, with the microphone coming undone here is, you know, Tom. Not shown here the illegal drops that he had earlier in the round and the wayward shanks,” Rodgers said, also calling out Brady talking trash.

“And then here you see him picking the ball out of the hole. Pants, a little rip there, I’m sure Under Armour gets blamed for that,” he continued.

Brady and Mickelson lost to Woods and Manning in last year’s event. Brady is once again paired with Mickelson while Rodgers is with DeChambeau.

Last month, the foursome took part in a virtual press call, with Brady trolling Rodgers about January’s NFC Championship game between their teams, in which Packers coach Matt LaFleur opted for a fourth-quarter field goal instead of giving his quarterback the ball and a chance to score.

“I do think you do have a partner that would probably like to go for it a little more often than he has in the past so Bryson, I’m glad you’re encouraging him to kind of go for it when it’s on the line,” Brady said.

When DeChambeau responded, “I’ll never push anyone to do anything, so he can choose to do whatever he wants to do,” Rodgers replied, “Well, I usually don’t get the option, in my experience.”