The ACT Brumbies were taught a rugby lesson by the most successful team in Super Rugby at Canberra Stadium on Saturday night.

The Brumbies lost an eighth straight game against the Canterbury Crusaders after the visitors showed them how to make the most of playing with a man advantage. 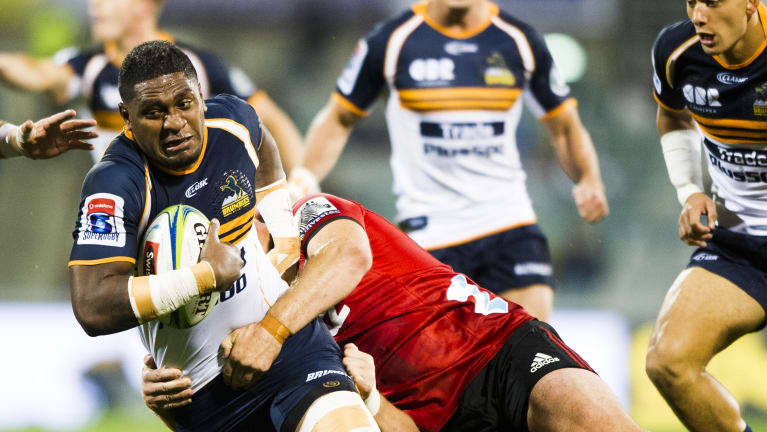 The Brumbies failed to capitalise on a two-man advantage in the second half.

Brumbies winger Chance Peni was sinbinned for a clumsy high tackle which concussed Israel Dagg in the first half.

The Crusaders scored down Peni's wing just five minutes later when Dagg's replacement Manasa Mataele went down the blindside from a five-metre scrum.

Moments later and Mataele scored again down the same wing as the Crusaders piled on 14 points while the Brumbies were down to 14 men.

In stark contrast the Brumbies spent nine minutes of the second half with a two-man advantage after Chris Barrett and Ryan Crotty were binned for professional fouls, but failed to score a single point.

Dagg failed his concussion test and took no further part in the game but Mataele was more than competent and the tries he scored proved the difference in the 21-8 win.

It was the same story last week when the Brumbies conceded a match-turning try when they had a man advantage during their loss to the Argentina Jaguares.

The Brumbies face an uphill battle to make the Super Rugby finals after the loss left them languishing as the lowest Australian team on the ladder.

The Brumbies are struggling in 13th overall and sit fourth in the Australian conference, only above the winless Japanese Sunwolves.

The ACT men have played finals for the past five years but a sixth straight appearance in the post season is quickly slipping away.

The Brumbies next face the Melbourne Rebels in one of just three remaining Australian conference derbies.

They then head to South Africa for a two-game tour and come home to face two more New Zealand teams in the final three games of the season.

It means they'll have to win their remaining conference games and then twice in South Africa or break Australia's Kiwi curse which now stands at 36 games.

The only thing keeping the Brumbies in the race is their Australian rivals also keep losing. The conference winner is guaranteed a spot in the finals.

They're still just within touching distance but it's going to take a huge effort from here.

REFS SHOULD BE HELD ACCOUNTABLE

Enough is enough. It's time for SANZAAR to do something about the sloppy standard of refereeing in Super Rugby.

Jaco Peyper made a major blunder just minutes into the match at Canberra Stadium, first failing to acknowledging an offside from his assistant and then dismissing it with: "We'll get it next time."

Super Rugby referees have escaped scrutiny for far too long. That doesn't mean they should be treated the same way NRL referees are treated. Referees in any sport have the hardest job of all.

But they are rarely accountable for mistakes and are giving jobs in charge of games every week, regardless of performance.

Peyper's blunder put the Brumbies under the pump just moments after scoring the opening try. Instead of attacking the Crusaders again, the visitors were on the back foot.

It proved a turning point as the Crusaders enjoyed 70 per cent of the ball for the next 20 minutes and were awarded the first five penalties of the match.

It wasn't Peyper's only error of the first half as he missed a blatant forward pass in the lead up to the Crusaders third try.

The South African was sarcastically applauded by the Canberra crowd when he later called the Crusaders back for a forward pass. But he still went upstairs and managed to find an earlier penalty against the Brumbies.