Clubs have been reminded that runners need to get on and off the ground as quickly as possible in an AFL memo sent to clubs last week.

The memo is understood to have emphasised that clubs need to ensure their runners perform their roles without getting in the way of and inhibiting the ability of players to play or umpires to do their job. 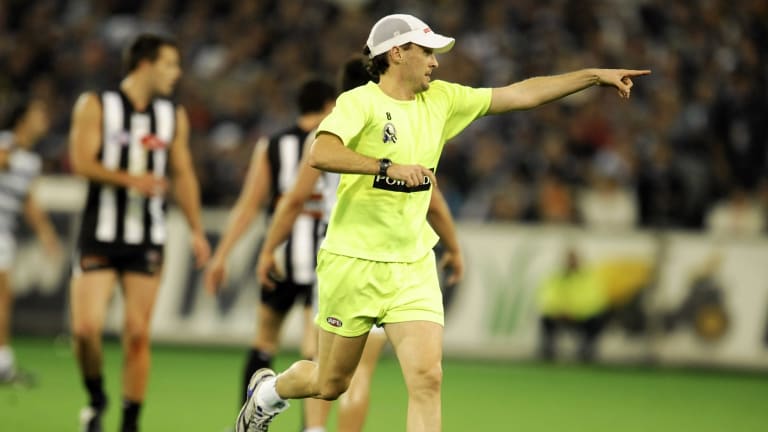 The AFL has warned clubs about runners again.

If they do get in the way, the AFL is understood to have reminded clubs the umpires will not hesitate to pay a free kick against the team that has a runner interrupting play.

Clubs have been asked to limit the runner's time on the ground with the AFL keen to ensure runners also have an ability to understand and read the play so they stay out of the action.

The AFL's stakeholder and engagement manager James Podsiadly has been monitoring the impact of runners in the opening rounds and is looking to support them to perform their role in a way that sees them become less visible.

His view is that because the individuals performing the role have a vast range of experiences from former players to former assistants to conditioning staff the AFL can help some become better at recognising where the ball is likely to go during play.

The AFL backed down on a move to get rid of runners or limit their opportunities to run on the ground until after goals when several senior coaches raised objections in their pre-season meeting with the AFL.

However they promised to monitor runners during the season to get a sense of their impact and there remains a view that some runners are getting in the way more often than the AFL would like.

Some clubs Fairfax Media spoke to are preparing for the runners' role to be reduced in 2018 however they all said runners were not an issue coaches discussed either during or after games.

Runners were used for the first time in 1955 when trainers were permitted to talk to players during the game however in 1964 they were limited for one season to talking to only a team's captain and vice-captain before reverting to all players in 1965.