Western Bulldogs captain Easton Wood will be sidelined for two to three weeks with a low-grade hamstring strain, heaping further injury misery on the struggling side.

Redpath requires surgery on his lateral meniscus in his knee and will miss 10 to 12 weeks but the Bulldogs expect Roarke Smith and Josh Schache to be available for selection after injury layoffs.

Wood got through the Bulldogs win over Carlton on Friday night despite the hamstring injury.

Meanwhile Sydney are sweating on the availability of star forward Lance Franklin ahead of their clash with North Melbourne on Saturday.

Franklin had been battling a bruised heel for the past month and missed the Swans' 17-point win over Geelong in round six. Sydney have blamed the hard surface at the new Optus Stadium in Perth for the injury, sustained in round one.

Coach John Longmire told SEN on Monday that while Franklin had been able to play since round one, he hadn't been able to train, which is an unsustainable routine. 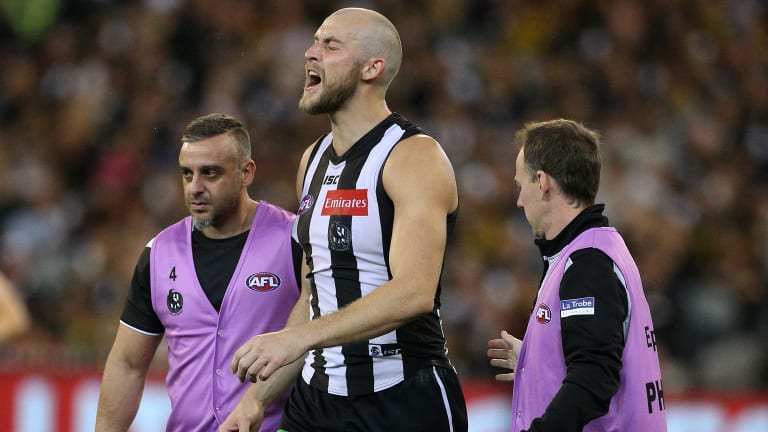 Ben Reid’s career has been riddled by injury.

Reid and Aish have been solid contributors to the Pies' good form in 2018. In good news, it appears likely that Darcy Moore and Taylor Adams will be available for the game against the Brisbane Lions at the Gabba on Sunday. Daniel Wells will likely not be available and Jamie Elliott definitely won't be, Buckley said.

Fremantle and Port Adelaide are bracing to be without star forwards Michael Walters (knee) and Chad Wingard (hamstring) following injuries in their weekend encounters.

Walters has a medial ligament injury, which the club said would keep him out for at least two weeks, while Wingard will miss "a couple of games" according to Power coach Ken Hinkley.

The news is better for Melbourne fans after key forward Jesse Hogan (knee and ankle) was in the wars during the win over Essendon on Sunday.

Hogan came into the game with a sore left knee and then rolled his ankle in the second quarter. He managed to play out the game and will be fine for the clash with St Kilda on Sunday.